National Theatre Live, from The Harold Pinter Theatre. 18th May 2017.

Imelda Staunton’s performance in Who’s Afraid of Virginia Woolf? is a thing of brilliance. All four members of the cast give brilliant performances but none more so than Staunton – this is the kind of production which makes you wonder why we stop at five stars…

As Martha, Staunton is fierce, fiery and a force to be reckoned with in a performance which dares you to look away while holding a smashed bottle to your throat. Detestable and vulnerable while fulfilling every expectation of the lecherous, unsexed, unhappy and bitterly unkind wife, Martha feeds on the discomfort of others and picks her teeth with the remnants of their dignity before dissolving into a tragic, unnerving wreck. What a gift Edward Albee has given to actresses lucky enough to get the gig!

Martha is relentless. Abusive, antagonistic and utterly merciless yet she’s also seductive and is disturbing in her advances. Acts 2 and 3 lay bare her unravelling, taking us from glimpses of her insecurities to extended insights into her instability before shatteringly leaving her as a timid, deflated creature who fears the world of reality now that her escapism has been revoked. It’s hauntingly powerful.

Martha’s counterpart in self and total destruction is George, the long-suffering husband with his own well of venom just below a badgered exterior. Hill never overplays George’s angst and his portrayal of the victim becoming bully is performed as if it is a fresh trope; a case of ‘look Martha! My cruelty can out-run yours! LOOK!’. He matches Martha in acid-tongued hostility but also falls back defeated with pained resignation and returns for more with confounding recoveries. Hill is a fantastic match for Staunton and the intensity between the two allows them to affect the audience with stunned awe rather than emotional tears – the reaction to George and Martha across the play is one of detached morbid curiosity. It’s certainly arresting and gripping, but we are very much stunned witnesses to a car crash. 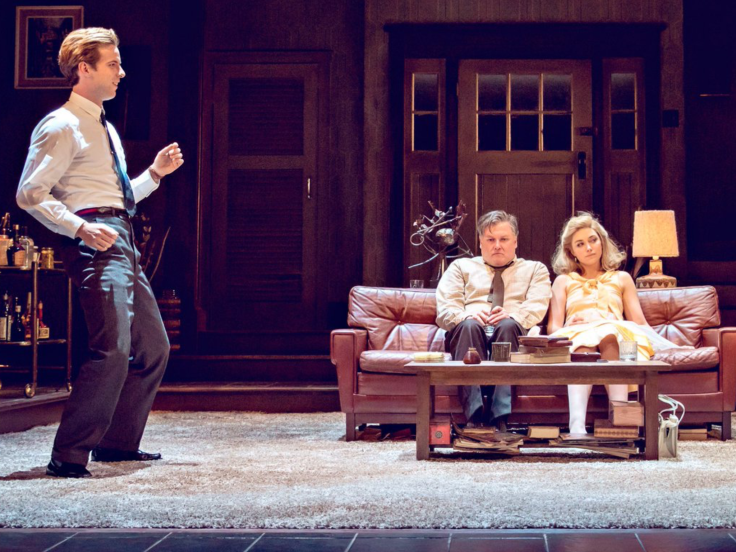 While Martha and George (in that order) dominate in this play, their young victims-come-toys, Nick and the aptly named Honey, also get the opportunity to give cracking performances. It’s easy to assume that Honey is a dismissible character at first; to think that she’s only there to support those with bigger, better stories to tell, but to dismiss Honey is a mistake. Imogen Poots gives a fantastic, versatile performance as the tightly wound Stepford-esque wife, but Honey has a gripping arc and Poots’ performance is both hilarious and devastating. The lacquered exterior and affected niceties wear down gradually at first until Honey hilariously becomes a bit of a mini-Martha; growling and indulging in the chaos and the ‘violenccccce’. Luke Treadaway plays Nick, the handsome, fresh-faced youngster with the pretty blonde wife and a promising future. He plays the good sport well as George antagonises and pontificates before making a foolish mistake in trust that will prove to be his undoing. Poots and Treadaway’s later performances are the strongest, as revelations fly, frictions flare and an unnerving parallel begins to form. Some might rightly assume that a play like this, set in one claustrophobic room over a few hours could prove dull or static, yet this production makes Albee’s writing fizz with enough energy to make an audience disregard anything but the performances and the script. There’s word play to challenge and amuse and the charged exchanges and biting comments on everything from social expectations to the implications of slim waisted women invite the intimacy and intensity of the controlled environment. Despite the damaging relationship portrayed between George and Martha, the writing pulls many laughs from the audience. Most of it is too subtle and intelligent, too blatant and too abrasive to be light relief – but there is light relief too as Honey or Nick cut through the tension with some naive attempts to put ice on the deepening wounds.

The best of the comedy comes from the moments of rage explosively let loose with shocking viciousness of language and insults as well as the sardonic, pedantic musings of George and the outrageous lechery of Martha. The writing is also incredibly fierce and dishes out scathing lashes to each and every character with lines to make you guffaw and to set your teeth in edge. That said, there’s a tenderness and intense fragility in the writing which makes this play a veritable treasure trove of memorable lines. There’s so much to say about how the lives of the couples and the characters intertwine, clash and speak volumes about the human condition – that’s the beauty of this play – the layers are up to the viewing audience yet the quality of the writing is undeniable. Who’s Afraid of Virginia Woolf? is a superb play brought to life by a thoroughly brilliant cast and realised by insightful, explosive direction from James Macdonald. It simmers, sizzles and it spits; it dies down to embers yet it is never far from powerful flames. A must see.