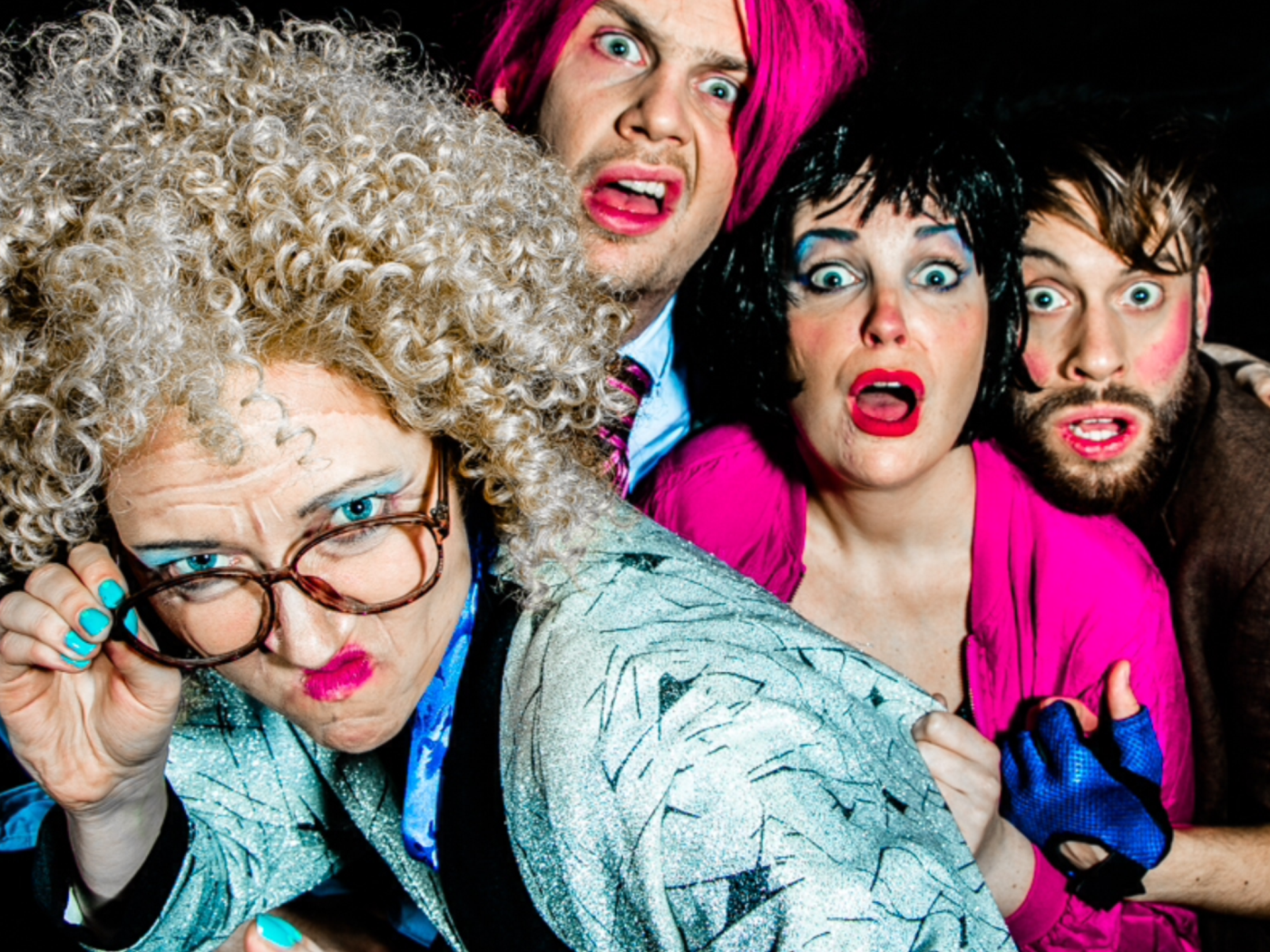 This show from Kill The Beast is off-the-charts wacky; crammed with energy exhausting to watch, craziness worthy of certification and big laughs enough to warrant the label ‘success’. It is also bonkers enough to require both investment and significant acclimatisation.

I try to avoid too much prior knowledge of a show, so my expectations were only those created by the flyer and a few review headlines. Although billed as a wacky, alternative comedy piece starring a cast with ‘trademark dreadful faces’ and a mash-up of 80s/90s influences, the space-age, over the top opening musical number and subsequent over the top dialogue snippet were both a shock to the system and the stuff of my nightmares; an awkwardly extended gag reel which looked a lot of fun in process but shocking as product. The look of horror shared between myself and my accompanying friend was a mirror image. Amazingly though, within five minutes, we were forced to laugh…and then the laughs, big and small, kept coming for the duration of the performance. So, I say again- this show requires investment; if I’d given up after the initial shock to the system, I’d have missed out on some great physical comedy, witty one liners and hilarious non-sensically combined ideas dotted perfectly throughout the hyperbolically odd yet very funny script. It’s not my usual taste or brand of humour, but I thoroughly enjoyed myself once I’d given in to the silliness and the uncontainable energy – and I’m so glad that I did.

I don’t think this show would have worked at all without the total conviction of the actors – and I marvel at their ability to perform such a script, in such a way, with such skill; I’d have been cringing behind the curtains if asked to play any one of the parts for more than the time it takes a person to realise that they are on a stage. There were no cast lists available and I haven’t been able to find one on the site but I thought ‘council worker guy’ and ‘growling granny’, as I shall call them, were particularly great in their very well sustained and at times, genuinely creepy delivery; never far from a laugh at any one time. ‘Super fan girl’ and ‘superhero voice guy’ were also very strong performers but had fewer of the big laughs assigned to them.

The surreal choreography accompanying the ditties about the damp rising and a subsequent need to vacate the building had me in stitches; salsa hips with dead pan faces are a marvellous comic combination and the song style which had made me want to get up and leave at the start had me gafawing and shoulder shuddering- all it took was a little time to acclimatise to the madness parading around before me. Large sections of the script itself were very clever and funny in the ability to master-mind some excellent lexical concoctions; factor in the physical comedy and vocal delivery of the cast, and it made for some brilliant moments (the ruby necklace, the mops and the gap year pics being particularly memorable, while the ‘The Damp is Rising’ and the ‘council workers’ songs were still making me chuckle as I was leaving the theatre).

Props were a keystone in the comedy arch of this show; the hand and the ‘creature’ being utterly ridiculous yet hilarious; after half an hour watching this show, I was drunk on the infectious silliness and energy of Kill the Beast. If you had shown me the same scene on YouTube not an hour before, my face would not have cracked; yet such is the spell of this company that my long-held comedy tastes had well and truly been sent on a mini-break. Costuming was simple but effective; mostly everyday wear with some additions of terrible (by design, I assume) wigs. The cape-come-granny-dressing-gown was brilliant and putting that poor, awkward council worker in short shorts and a pink camisole was a source of great comedy. Likewise, the staging and set design was very low-scale with three movable screens, onto which various set-creating projections were cast. The moving around of the screens was minimal, which I was thankful for; those things can be incredibly irritating if over-used.

Kill The Beast’s style, as well as ‘Don’t Wake the Damp’, are not for the faint hearted or the purists among us. However, if approached with that ‘willing suspension of disbelief’ that Coleridge was pontificating about, coupled with unconditional investment, it has the potential to be a real hoot for unsuspecting folk like me. Despite the total shock to the system, I had a great laugh and I was glad that I went; there’s absolutely nothing wrong with a vacation from the norm and I’m pleasantly surprised to find myself thinking, as I sit here, that I would in fact go to their next show quite happily in the knowledge that after the initial horror, the many, many laughs would soon follow.

One thought on “Don’t Wake the Damp: Bonkers”