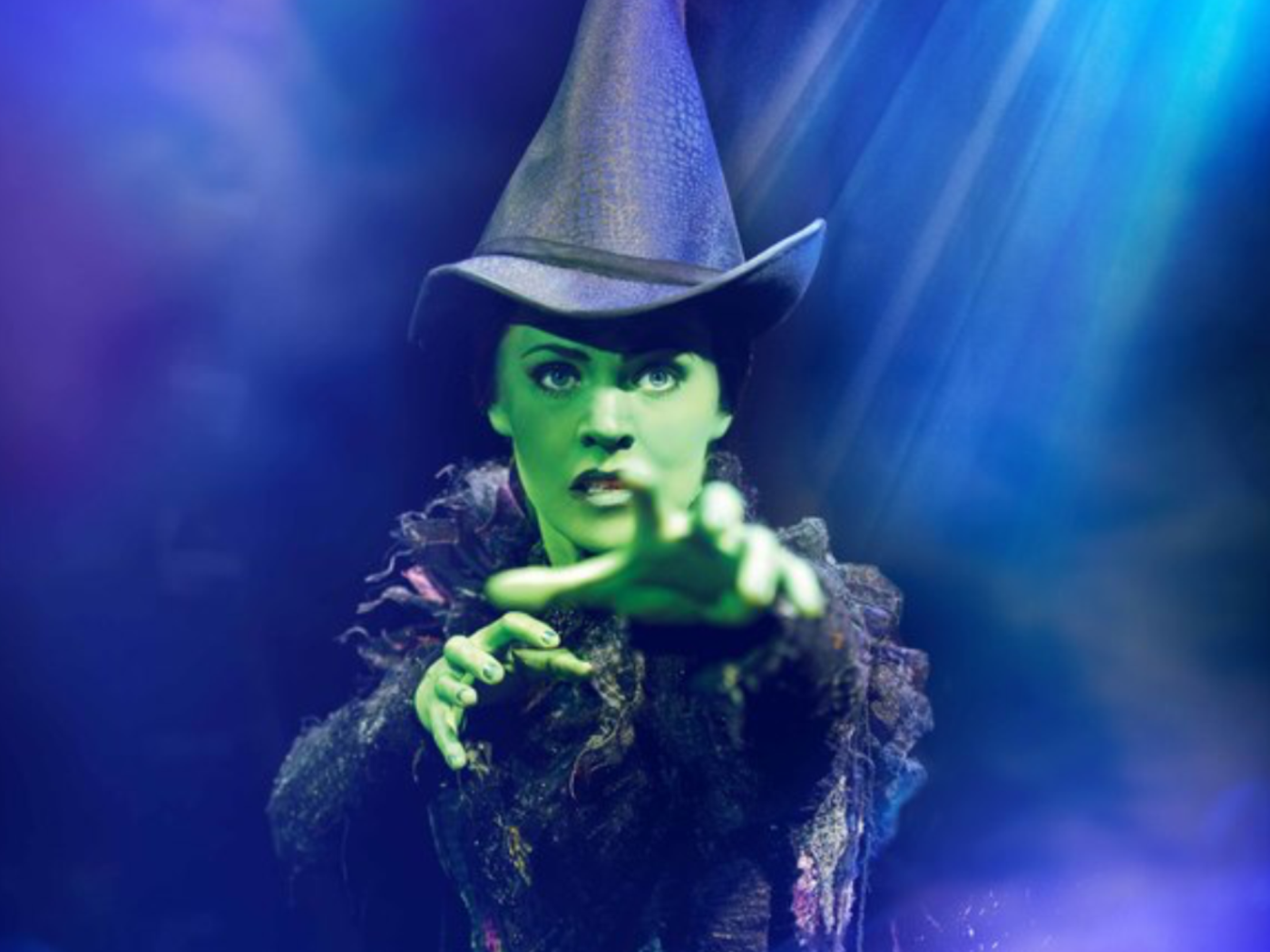 Wicked, based on the novel by Gregory Maguire, is fast approaching its tenth anniversary. In preparation, a brilliant anniversary cast has been selected, including the phenomenal Rachel Tucker as Elphaba and the hugely talented Suzie Mathers as Glinda; the two leading ladies have some of the very best West End vocals that I’ve heard in recent or distant shows. My last review was on ‘Funny Girl’; a show which is brilliant in its selective approach to West End style. By comparison, ‘Wicked’ is the reverse; 100% West End glory, through and through…and through.

Let’s start with music and lyrics. Stephen Schwartz is responsible for both and he has succeeded in bringing into being tunes for every facet of the human heart (well, almost, it seems). The music, like the vocals which bring the beautiful lyrics to life, are very much the jewels in the crown of this show- with ‘Defying Gravity’ being an inspired selection for the closing of the first act. Tunes like ‘Popular’ are fun and playful while the vibrant and accosting contributions from the ensemble add oodles of atmosphere at just the right moments. Not only are the songs hugely catchy and memorable, they are gloriously entertaining, swelling and bopping in turn before channeling some true diva delivery for the well known and much loved Elphaba numbers.

The production is likewise a glowing example of West End grandeur. The set is all spectacle, with cogs and mechanical whirring visible throughout, we are openly invited to see the inner workings of Oz. The mechanical Wizard is surprisingly intimidating and is brilliantly constructed- there is a definite sense of West End-ian ‘no expense spared’ about him. The clever mechanics enabling the visual masterpiece in the breath-stealing ‘Defying Gravity’ is one of the most winning aspects of this production; it’s utterly West End in its drama and its ability to inspire total awe. 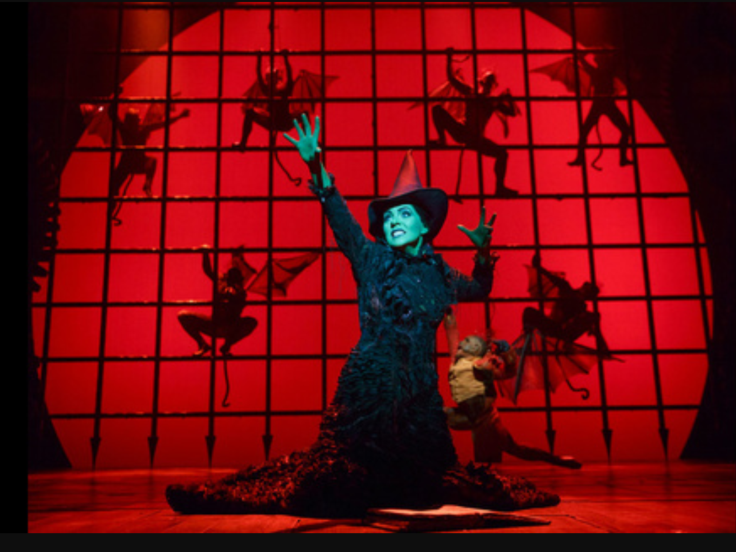 As for costumes, Priscilla, Queen of the Desert retains the crown for ‘most outlandish and mind boggling designs’ yet Wicked is very much a major contender. Glinda’s gowns are positively Disney and are therefore, I assume, coveted by every little girl in attendance. Elphaba’s final gown is famously intricate and beautiful- no simple little black dress there, for sure! Costumes worn by the ensemble (masters of quick-changing) are fabulous; definitely other worldly to fit the narrative but also incredibly classy. Those costumes make me want to begin a career as a member of the ‘Wicked’ ensemble… Bravo Susan Hilferty.

As for the cast…what can I say? I’ve never appreciated an ensemble more than I did for this show. They open the show with a gorgeous chorus of ominous claims, their voices are repeatedly called upon to adorn the narrative progress, they accompany the orchestra in accompanying the protagonists and they finish the show with such powerful force and thoroughly West-End-ian belting, that the ribs of the stall patrons positively vibrate with the sheer power of it. Then of course I have to mention the slick and sublime choreography (James Lynn Abbott)- what’s not to love about an ensemble as talented as this? Well done, ‘Wicked’ team, this show is a glittering example of how to make every single performer stand out for their moment of glory.

Elphaba. One of Musical Theatre’s greatest characters and who better to play her than the longest running Elphaba, Rachel Tucker?

Vocally, Rachel Tucker is an absolute show-stopper. What has come to be known as ‘The Tucker Growl’ amongst fans is now something that I wait with bated breath to hear… She’s a belter alright, and yet she still sweetly caresses the more tender numbers and is every bit as skilled and talented in making her breathless, restrained lines as gripping as her big, magnificent moments. Tucker’s Elphaba has the dead-pan comic moments completely under her spell, making her reactions in ‘Popular’ one of my favourite things to see in the show; equally, Tucker absolutely nails the inexperienced green girl at her first party scene- that dancing…oh, that dancing…

Tucker is a highly evocative actress, a supremely talented vocalist and an all round stellar performer. Her performances of ‘The Wizard and I’ is endearing and vocally flawless while ‘I’m Not That Girl’ and ‘As Long as You’re Mine’ are very moving. In the same vein, her renditions of ‘Defying Gravity’ and ‘No Good Deed’ are phenomenal.

Suzie Mathers is a fantastic Glinda too – she has some powerful pipes, for sure. Her Glinda is surprisingly gritty at times, which I like, and I’m very much appreciative of her amazing range as well as her tear-jerkingly beautiful harmonies with Tucker. Lauren James Ray was wonderful as Nessarose- very, very touching as the wheelchair bound sister desperate for connection; her rendition of ‘We Deserve Each Other’ was beautiful. Fiyero, played by Oliver Savile also had some impressive pipes. He was also charismatic, funny and bravely sporting possibly the tightest Fiyero costume that the West End has ever seen. Oliver Savile made a perfect Fiyero and I believed every bit of his torment as much as his cheek- ‘Wicked’ casting never fails, it seems.

My point is this: Wicked is a feast for the ears as well as the eyes; it’s utterly, totally, thoroughly, quintessentially West End in both style and substance. It oozes quality and parades its cast like no other show. I can’t think of any other show which is more West End from every angle, in every category; hop on a bus, train, plane or broomstick and get yourself to the Apollo Victoria London…and try to get there before the fabulous Ms. Tucker departs in January 2017!

You can get your tickets here: http://www.wickedthemusical.co.uk/london

Note: This review was originally posted on OnStageBlog.com.