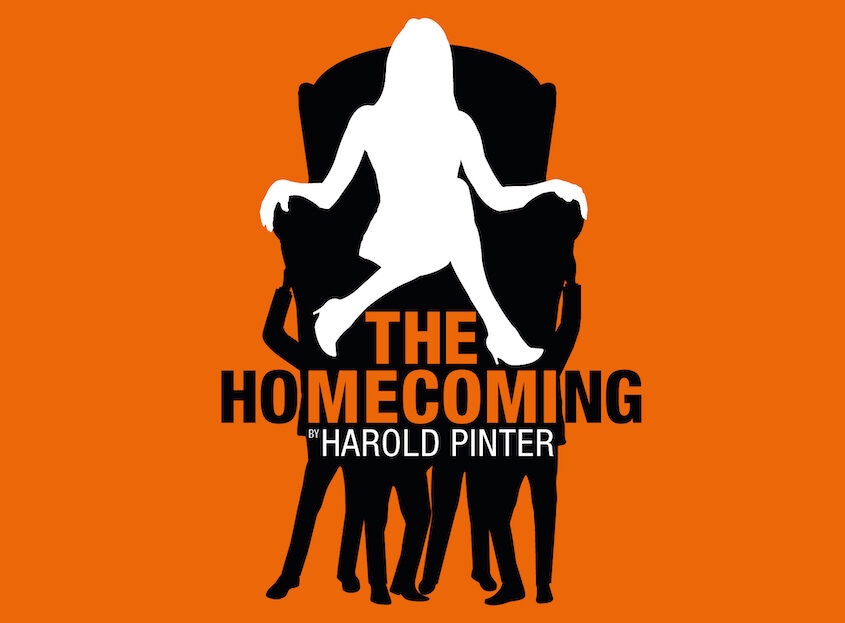 The truth? I’m still not sure what to think of the bizarre but enthralling piece of theatre that is The Homecoming. I realise of course that this is precisely the reputation preceding Mr Harold Pinter, master of ambiguity and rule-breaking, so I’m happy to sit with my indecision in the secure knowledge that I’m in good company.

When it comes to The Homecoming, there’s a lot of recognisable domestic ordinariness in front of us and yet it is a genuinely shocking play. The unexpected elements are so numerous that we are eventually taken beyond bleak satire and enter the realm of a trippy social commentary unsure of its own destination.

The plot? It’s the 1960’s and a cuttingly blunt father butts heads with his three sons, a wife (not his – she being dead) and his brother. The relationships are fractious, the characters are varying shades of perplexing to unhinged and the plot is…well, half there and half for us to fill in the gaps it would seem. There’s little here in the way of satisfying conclusion or neat linear narrative (or even reliable cohesion for that matter) and yet for all that, there’s no denying that this play is gripping. Sudden turns of events often leave foreheads with nowhere to go but up and on occasion, the jaw nowhere to go but down.

Keith Allen’s take on the sweary patriarch of the family is vicious and cruel but also funny and somehow charming, being in that enviable “I’ve lived too much to give a shit” stage of life. Son number one, Lenny, is a thoroughly unnerving mobster type played pitch perfectly by Mathew Horne (who impressively masters the distinctly unnatural rhythms of Pinter’s dialogue).

Son number two, Joey, is a somewhat intellectually vacant wannabe boxer and Geoffrey Lumb makes him both risible and pitiable – no easy feat considering some of the antics of the character. The third and final son, Teddy, is a Doctor of Philosophy, returning to the family home with his unsettled and perplexing wife, Ruth – played with an enigmatic edge by Shanaya Rafaat. The brother, given a quiet but substantial impact by Ian Bartholomew, is a chauffeur who has very much outstayed his welcome if you listen to cantankerous pops.

With the matriarch dead and out of this picture, the representative woman seems all the more significant, but she’s not here to play mum, she’s very much an oddity: contrary, unpredictable and teetering on the unhinged. There’s a sense of her acting out in surprising ways just to feel something; something behind the eyes says “what else is there?” And the relationships across the board are just as unstable, whether it’s the 180 shifts in attitudes between brothers and father or the surprising developments between brothers and sister-in-law or indeed the unfathomable dynamic between the learned husband and the ex-model wife licking the wounds of her clipped wings.

Jamie Glover’s direction of such an unconventional work is deft and does well to handle the jarringly sudden conversation shifts which are often enough to give you whiplash. Liz Ascroft’s set takes us to muted 1960’s decor – the colours are faded and the comforts just enough to suggest that this was once a functioning family home. Johanna Town’s lighting moves from that muted domestic haze of dim lamps and a single overhead light to dramatic pulses of floodlights in scene transitions – brilliantly apt for the blunt, fragmented nature of the play.

In many ways, The Homecoming is full of gender politics and power struggles. But it also feels contemporary as a bang up to date study of toxic masculinity, landing at the centre of a distinct Venn diagram: unchecked aggression, animalistic sexual instinct, a loose relationship with decency and almost no relationship with the art of listening instead of speaking. But there’s also a question of who really has the upper hand here. Is it the men, with their blinkered existence and transactional attitudes, or is it the woman, rejecting a drab life she clearly has little interest in?

So true to form, Pinter’s play appears to deconstruct elements of human nature in a very ambiguous but thoroughly fascinating way. He defies expectations of what a “good” or “successful” play should be and it’s certainly an audacious approach. The Homecoming is bleakly funny, at times repellent and frequently bamboozling. It is many things, but it is never dull. Ah, nothing like your first Pinter, eh?

The Homecoming plays York Theatre Royal until May 21st 2022 and you can find tickets here.