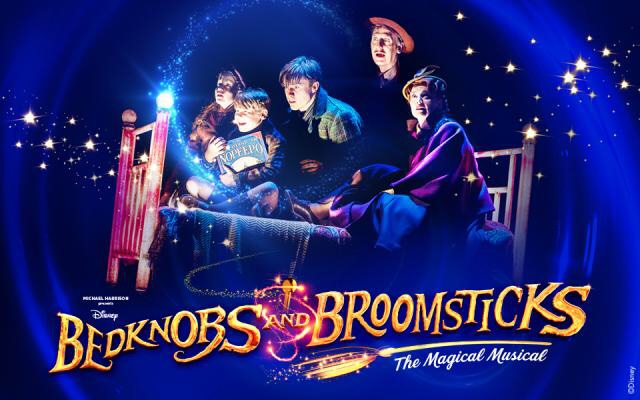 Dear Santa, all I want for Christmas is to know the secrets of the illusions in this show…

I’ll start as others have and confess that I don’t know the movie and I didn’t know anything about the story going in, but Bedknobs and Broomsticks quickly proves itself to be a classic children’s story, complete with conveniently absent parents, some knee slapping camaraderie and a good heap of make believe. And it’s in that make believe and magic that this show really excels – I defy anyone (untrained in the field of magic, of course) to see it and not feel at least a little mystified by the trickery and spectacle on offer.

Under direction of Candice Edmunds and Jamie Harrison, and with Book by Brian Hill, this tale arrives to the stage like a bit of a nostalgia-filled childhood dream, full of big sights and sounds to punctuate what is ultimately quite a dark tale of childhood in wartime.

In short, three orphaned children are evacuated out of London. Sent to stay with strangers in the country, they find themselves the charges of the very unorthodox Eglantine Price – well, if you call being a witch-in-training unorthodox these days. Dianne Pilkington is particularly perfectly cast as Price, bringing with her that rich, textured voice capable of so much when set to music and here, just as much when the character moves so easily between playful and purposeful – there’s such a gentle gravitas to the character that it’s impossible to be anything but Team Price.

With chipper cockney children (each complete with a little woe or angst thanks to recent loss) at the heart of this tale, there’s plenty of energy and pathos about. Conor O’Hara’s Charlie Rawlins, eldest and most gifted with the gab, brings a distinctly young Michael Crawford energy to the role (a la Some Mothers) and wouldn’t be out of place in a production of Oliver with all his exuberance. The younger Haydn Court brings a very different kind of energy to little Paul Rawlins, reminding us that beneath the songs and jokes, these are vulnerable children in need of guidance. Isabella Bucknell provides the middle ground as Carrie Rawlins; precocious and ready to take on the world, but also very much in need of her big brother’s bravado.

And if the children have their own uncertainties to overcome, then so too does Miss Price, who is on a mission to acquire the remaining half of a spell in the name of supporting the war effort. With the children in tow and joined by Charles Brunton’s calamitous and energetic Emelius Browne, the three gallivant across the realms of reality and fantasy in search of answers.

Original music and lyrics by Richard and Robert Sherman offer up some iconic numbers like “The Age of Not Believing” and “The Beautiful Briny”, and new and additional music and lyrics from Neil Bartram provide some neat narrative segues, meaning this show achieves pace and light feet at the same time.

But visual spectacle is the cornerstone of Bedknobs and Broomsticks. Gabrielle Slade’s costumes capture the timeframe as instantaneously and perfectly as Jamie Harrison’s set captures wartime and gothic spaces befitting a tale of magic and childhood (there are some excellent fleeting moments of mild threat too, thanks to Harrison’s set and Simon Wilkinson’s lighting designs working so seamlessly together).

Some of the most impressive delights of this show can be found in charming puppetry (Kenneth MacLeod), that iconic flying bed and genuinely bamboozling moments of illusion (also Harrison) – gasps and murmurs of surprise from the audience are audible throughout. So, above all else, this show beautifully demonstrates in the most impressive of ways the magic and spectacle of live (and ambitious) theatre. Catch it if you can!

Bedknobs and Broomsticks plays Leeds Grand Theatre until January 2nd 2022 and you can find tickets here.