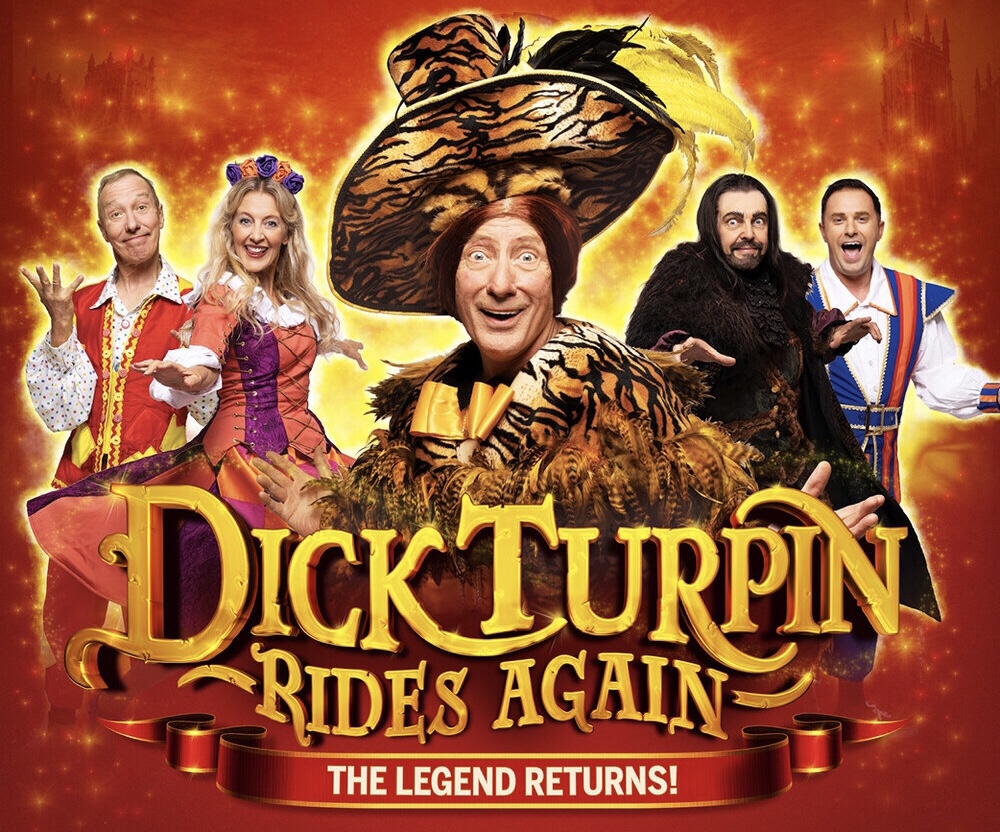 Berwick Kaler and all the gang are back together again – this time at the Grand Theatre and Opera House, York rather than the Theatre Royal. As with previous productions, the in-jokes are many and the reception of this returning panto family is extremely warm – in fact, there’s a wholesome and heart-warming speech in the second act which very sincerely acknowledges the appreciation felt towards loyal and returning followers of Team Kaler. As with the last production though, such an established relationship between returning audiences and this team does have the pitfall of leaving newcomers a bit lost amongst the free-for-all approach to plot and its trimmings.

In Dick Turpin Rides Again (written and directed by Kaler), we meet Dotty Donut (Kaler) and her bairns Dunkin Donut (Martin Barrass) and Donna Donut (Suzy Cooper) who are all three somehow (through love at first sight/ an amulet and/or neck nibbling) tied up with the return of the highway robber Dick Turpin (Daniel Conway). Somehow, Luvlie Limpit (AJ Powell) slots into the shenanigans as our regular comic relief, tied in with uber-villain Vermin the Destroyer (David Leonard).

Conway brings some West End vocals to the table in an impressive end of act number featuring some great spectacle while Cooper and Leonard once again prove themselves capable of carrying material of any quality with plenty of presence and the kind of visible enjoyment which is often infectious. It has to be said though that the production lacks something as a direct result of quite limited time with Leonard centre stage; his tongue-in-cheek declaration of “boo all you like, we all know you’re really here to see me” is actually an undeniable truth. In previous years, I’ve gladly let the in-jokes wash over me in the knowledge that Leonard will save the day as the highlight of any panto from this team, but they’ve missed a trick by leaving him backstage for too long this time.

Being so “madcap” in approach also means that this panto is difficult to follow at times, particularly when so many scenes, musical and gag-centred, seem so random and separate from the loose-fitting central plot – and far more so than previous productions. In many ways, this show is better understood as a sequence of comic segments harking back to variety specials, which does offer some pleasing nostalgia but doesn’t lead to secure understanding of the events unfolding. For die-hard fans, that approach is clearly still very appealing, but it’s pretty tricky to find the polish in this production which so often finds itself at the feet of Kaler’s distinctly laid-back patter, stripped-back scenes and gentle jibes at his cast mates.

The best pantos have wide appeal. They pitch the bulk of the entertainment at the youngsters and if they’re really good, they offer a good dose of more grown-up laughs to fly just over the tops of little heads. They blend beloved traditions with pop culture, wit and slapstick to snatch the giggles waiting to be tickled out of audiences. This panto does many of those things for returning fans (the chap on my row hooted at every second syllable Kaler uttered, clearly having the time of his life) but overall this doesn’t feel as generous and open as it should. Perhaps the only conclusion I can draw is that as a relative newbie to this established and evidently popular merry band, I’m not nearly as likely to enjoy their often puzzling choices as the regulars. If you’re already #TeamKaler and you know what to expect, I’m sure this’ll be another winner, but it’s more difficult to appreciate if you lack that history.