It takes all of a few mere minutes for this production to show us exactly why it has snapped up so many awards; from the rousing, foot stomping pre-curtain act delivered as the audience arrive to the first full pelt number from our lead, we are set for an evening of heart, soul and thoroughly fantastic music.

Once is a romance on two levels. We have the classic boy meets girl trope but we also have a wonderful love affair with music and musicianship running though the whole piece. With two stellar leads (Guy: Daniel Healy, Girl: Emma Lucia) joined by 13 immensely talented actor-musicians, there’s no length of time passing without a gorgeous musical interlude. In fact, I’ve never seen better segues and it quickly becomes a source of anticipation to hear our ensemble strike up for snapshots of energised numbers or as is the case in the second act, some positively transcendental choral pieces.

The show is based on John Carney’s film (book by Enda Walsh and original production concept by John Tiffany) and Carney’s inspiration for this tale arrives from left field with aplomb. A busker and a quirky meandering free spirit meet by chance and change each other’s lives in a variety of ways. It’s not your run of the mill romance by a long way and instead opts for an altogether more modern and complex tale which is told with beautiful simplicity and a pervading sense of organic day to day ease telling of an extraordinary connection. It’s easy to find yourself under the impression early on that very little happens in this story but that would be an unjust conclusion – the story covers great ground, it just does so in the most brilliantly understated way. 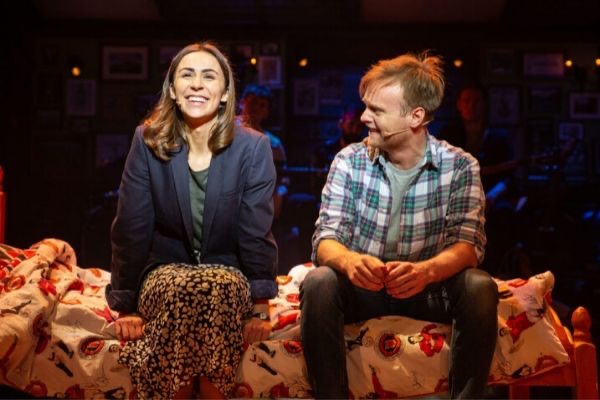 Healy and Lucia are a superb pairing both vocally and as romantic interests with a gentle and often comic ease to their relationship which gradually evolves from an awkward exchange to a co-dependent anchor dynamic. Theirs is a story for our modern, much more complicated times which looks at the timeless trials and tribulations of blossoming connections with a well crafted fusion of light comedy and poignant undertones. Healy most often serenades us solo while Lucia is often brilliantly backed by Ellen Chivers, Rosalind Ford and Emma Fraser – with Chivers giving us those wonderful shivers with her pure high notes. Lucia’s voice is a real force and a gorgeous source of sound to be looked forward to. Most impressive of all though are the harmonies created in various combinations across the cast who also impress with slick choreography from Francesca Jaynes.

Comedy is generous and is primarily the domain of Lucia’s infinitely bouncy-even-when-it’s-comically-weird Girl, Lloyd Gorman’s unfiltered Svec and Dan Bottomley’s ridiculous, over-attentive and highly strung Billy, all of whom pull Healy free of the brooding musician role into witty back and forth before returning him to his central role of roaring belter with a moving husky lower register.

If Healy and Lucia capture hearts minds and ears here it’s as much to do with Glen Hansard and Markéta Irglová’s utterly brilliant music and lyrics as it is their musical talent. It’s one of the best scores I’ve heard in a good long while and arrives without one single solitary song feeling surplus or out of keeping with the general stellar quality. The programme helpfully defines the sound as a hybrid; combining ‘classic elements’ of Irish folk but with ’a more modern sound…indie rock or folk rock’. In truth though, however you try to describe it, you won’t really capture the delight of hearing it live; rich and velvety one minute and pulsing and soaring the next – it’s a welcome stand-alone departure from the majority of musical theatre sounds and styles currently finding success. 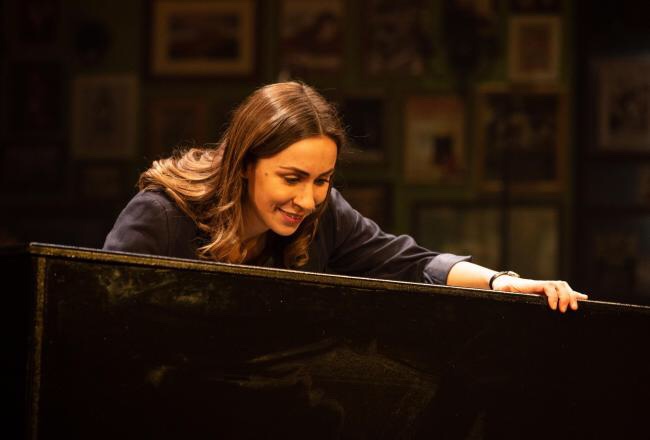 The love affair also extends beyond the characters and the songs to the wider production designs, with each element adding a layer of welcome warm-hearted escapism. Peter Rowe directs with an understated beauty which perfectly compliments the ordinary/extraordinary combined so well in the narrative. Libby Watson’s set strikes up the same tune; a cosy pub rich with lived in detail providing a backdrop to all other fleeting sets which arrive and depart with the same perfected swift movement of the ensemble as they sway and shift position in perfected unison. A whimsical flair is added via affectionate nods to our Girl’s Czech heritage with projections from Peter Hazelwood cleverly offering her native language while our ears hear the English speaking actress – complete with a few innocent laughs gained via endearing pronunciation. In short, it’s a beautifully and thoughtfully put together production from any angle.

So, getting down to the big question then: have I seen the film? No. So I have no idea how this production compares, but I can’t imagine it being a bigger thrill than seeing and hearing this production in its most alive and immediate carnation. Funny, moving and decidedly unique on the musical theatre scene, Once is an absolute winner – highly recommended!

Once is presented by Adam Spiegel and Robert Bartner and is a production of The New Wolsey Theatre, Ipswich and Queen’s Theatre, Hornchurch. It plays the Grand Opera House York until February 8th 2020 and you can find tickets here. Following this tour stop is continues to tour until July 2020 and you can find information and tickets for the tour here.