Absurd anarchy abounds in the best possible way in Kneehigh’s latest offering. All in all this ‘promenade musical’ and ‘sing along satire’ is a mixed experience – night club scene, street protest, circus act and avant-garde fearlessness come together to take us on a wild ride of satirical mudslinging. We’re encouraged to rebel against all the rules; head to the bar mid-scene; don’t worry a fig about those phones; get up and dance; sing out loudly and without inhibition; leave your seat and join the crowd on stage – it’s all there for the experiencing if you’re game for a lark.

Writer Carl Grose takes on Alfred Jarry’s infamous titan Ubu Roi and morphs it into a modern ‘sing-along satire’ which is co-directed by Grose and Shepherd with neither bridle nor rein slowing it down; anything goes and in response we accept the fearlessness in the name of experiencing something different and thrilling. The ridiculousness feels spontaneous even while it is scripted – the physical sequences are choreographed (Tom Jackson Greaves) but feel excitingly of the moment. The energy never lets up and two hours fly by in a haze of riotous escapism.

Michael Vale’s designs provide platforms as spaces with endless potential alongside more tangible elements like a giant loo while also bringing tech to the fore with some inspired hash-tagging. Praise also goes to his costuming which doesn’t give two ticks about anything other than pure unrestrained reflection of the characters donning them.

Mr Ubu arrives in the shape of the extraordinary Katy Owen who embodies every role I’ve seen her play in its purest and most enveloping form. Despite the grimy nature of her character Owen has us in fits thanks to a spectacular combined effort of gurning, inaudible mumblings and discordant sounds where Ubu’s dictionary of buffoonery has failed him. If this production is about theatre being alive and immediate, Owen provides a perfect visual of what that looks like with a nervous energy driving constant twitches and spasms which land somewhere on the spectrum of mildly unnerving and unexpectedly hilarious. 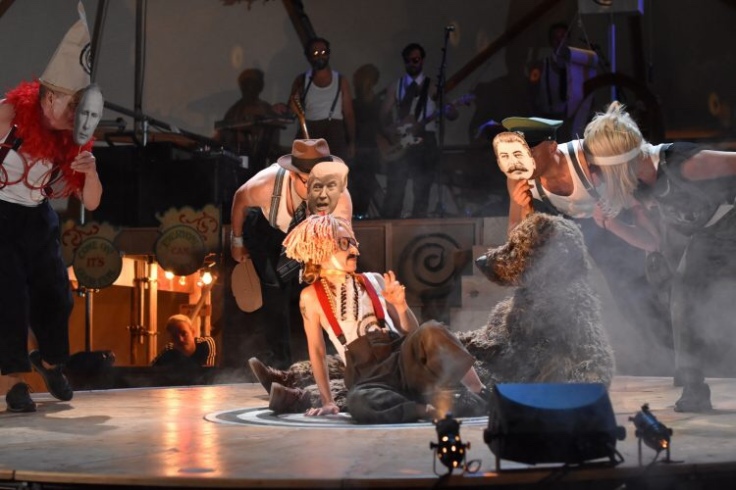 Mrs Ubu goes to the brilliantly entertaining Mike Shepherd – Artistic Director and comedy-female-in-residence for many Kneehigh productions. Mrs Ubu is coy and crass and the perfect counterpart to her sneaky slimy husband. Calling Ubu slimy seems all wrong through – he’s all obtuse angles and speech smacking of our most abhorred, arrogant public figures. Resplendent in mop wig, pin thin ridiculous moustache crayoned in place and a loo brush as sceptre, he’s a walking symbol of the pure farce of our current authority figures; it may well be abstract and gleefully irreverent, but there’s truth in every sharply satirical stride Ubu leaps.

Jeremy Wardle is both our indulgent, sardonic host and Ubu’s censor – cutting through the mucky moments with a sharp objecting whistle as a playful nod to the protesting original audiences who famously rioted when Ubu was first introduced to the paying public. Kyla Goodey’s Bobbi arrives on stage to increasing fan fare as our saviour. Quirky in her own right with a touch of the old verbal diarrhoea and prone to her own stints of intense, comic ramblings, she is prepared to fight bad wig against bad wig for our emancipation from Ubu’s supremely entertaining dictatorship and general anarchy.

Other excellent cast members include Adam Sopp, the butt of all jokes as Captain Shittabrique – in name an instant laugh, in character all intensity, and Dom Coyote who brings the over-sincere and mildly condescending President Nick Dallas to the table. Dallas praises our participation efforts whole-heartedly with impeccable timing and delivery landing every laugh – stealing entire scenes with ease while he’s at it too. And with music such a life force across the production, high praise goes to the fabulous Delycia Belgrave who joins Coyote in serenading and enervating us on the mics, backed by the fantastic band comprising of Alex Lupo, Justin Lee Redford and Renell Shaw – each getting a cameo in true Kneehigh style to defy the norm of theatre musicians being tucked away being heard but not necessarily seen.

How to describe this marvellously irreverent show? Mischievous? Riotous? Raucous? Rebellious? All of the above and then some. We sing, we laugh, we roar our approval at closing and end up thoroughly grateful to have been there to enjoy the glorious chaos. Catch it if you can!