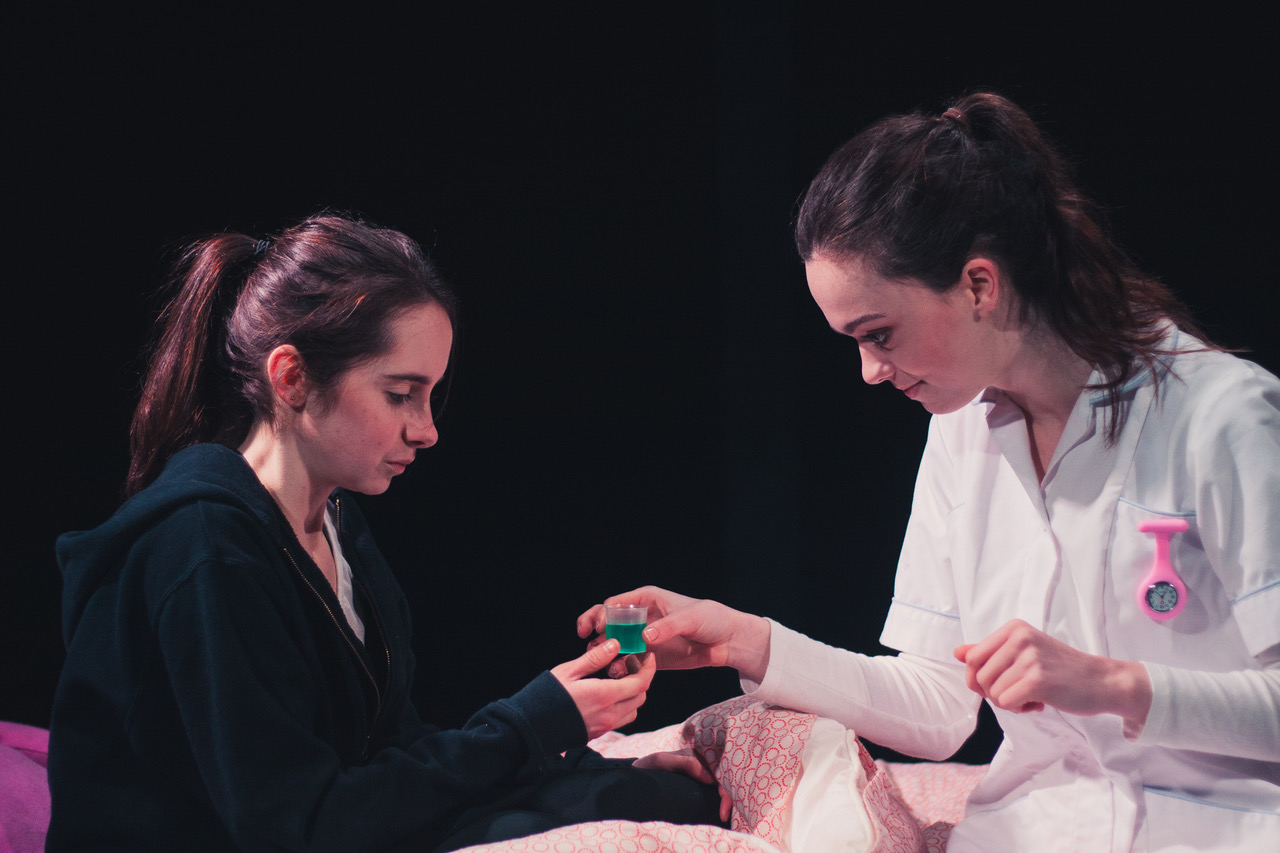 Just Out Theatre are heading to the Camden Fringe with White Nurse, a show which delves into experiences of breaking away from troubled relationships and the addictive nature of relationships causing more harm than good. The show plays The Lion and Unicorn Theatre 7-11th August 2019 (tickets here) so I caught up with Writer-Producer Abby Coppard and Director Keira MacAlister to talk all things White Nurse…

To begin, tell me a little about the company and the name – when and how did Just Out Theatre come to be and what’s the vision?

KM– The creation of JustOut Theatre was kind of a happy coincidence. Myself and Gabe Stewart were discussing our future plans over a piña colada and it just so happened we had the same goal. We wanted to create a new writings theatre company for young writers. We’d worked together successfully before so it was kind of a no brainer. Ben Wilson is good friend of ours and after having directed Home (one of Gabe’s plays) back in 2018 and becoming a fan of Abby Coppard’s White Nurse which I had directed in 2018 also, he was keen to set up the company with us!

The name came when we were trying to think of names that would sum up who we are and what our aims are. As we’re ‘just out’ of University and our company wants to help those ‘just out’ of education with their next steps as writers, it seemed the perfect name.

Where did the idea of a rehabilitation centre which can ‘cure’ addition in eight doses of medication originate from?

AC– I think nearly everyone can relate to a situation where you thought your boyfriend / girlfriend / crush / friend-with-benefits was the best thing since sliced bread and then it turns out they’re actually the complete opposite. In these moments it can sometimes feel like you’re trapped in a relationship with someone who deep down you don’t want to be with, but you convince yourself to see everything with rose-tinted glasses, and you stay with that person despite the trauma that they cause you.

I was going through this exact scenario when I listened to the fantastic song ‘Daddy’ by Emeli Sande. In the song, Sande compares love to heroin addiction, and it blew my mind! It made me think; if a heroin addict can visit a rehab, and be put on a dosage of methadone to cure their heroin addiction; then the same process should be applied to when you are addiction to another person. So, I created a fictional medication (called White Nurse – as that is a slang term for heroin use) thatwhen taken, would affectively shake you by the shoulders and force you to fall out of love with the person causing you pain. Just if only it was that simple!

Your character Layla is trying to extricate herself from a relationship – how does the production go about telling their story? Is this naturalistic drama or something more abstract?

AC – It’s a bit of both! It’s a naturalistic play, but through Keira’s direction we’ve definitely brought Layla’s thoughts to life on stage which adds an abstract element, allowing the audience to really live through Layla’s thought process with her.

KM– The way Abby has written the play feels very natural but the actual situation is far from normal. The play has a dystopian element that couldn’t be ignored in the production. We’ve managed to create a blurred line between memory and reality, everything blends together into this murky mess of a world. Through these blurred lines we see Layla’s (Aisling Lally) struggle to combat her addition to Joe and his world. So in that way, I’d say that there are more abstract sequences than natural drama within the piece. However, it doesn’t feel too detached from our own world.

White Nurse looks at unhealthy relationships in relation to addiction – are the two intertwined in your eyes?

AC – In short, yes. I think when a person is addicted to a substance, then in that moment they may feel as though that drug is the best thing about their life. It is only when looking at the bigger picture, and from a new perspective that they may realise that the substance abuse is actually the thing ruining them. I think it’s the same principle with toxic relationships.

KM– They say that love is a drug and that counts for toxic love as well. We’ve talked about this extensively in rehearsal and all of us agree that sometimes love feels like an addiction. You’re addicted to being with that person, whether it’s healthy or not. Particularly in abusive relationships your partner can make you feel like they are your everything and isolate you from others around you. They make themselves the only thing that can make you happy by cutting you off from everything you care about.

The show explores physical and emotional domestic abuse in relationships – is this an issue you are particularly eager to highlight?

AC – I think it is incredibly important to highlight these issues, as it can go unnoticed for so long. All to often it’s only when looking in hindsight that people may think – ‘oh yeah, that person treated me so badly!’ And I hope to change that, so people can recognise when they are being treated unfairly when it’s actually happening, and get themselves out of that situation before it gets worse.

KM– There’s definitely a personal connection to the topic within the cast and crew, which was one of many reasons why we wanted to take this play on a fringe tour. To us it was important to highlight how invisible these things can be, they can go undetected for a long time and sometimes the victims don’t even acknowledge it’s happening to them. White Nurse is very clever in the way it discusses these topics, particularly emotional manipulation.

Considering the nature of the subject matter, how are you ensuring that your handling of the subject is sensitive to the realities of domestic abuse?

AC – The last thing I wanted to do was to make light of these subjects and present them in a crass and insensitive way. The characteristics of Joe are subtly shown throughout the script, to highlight how hard it can be to notice these things. Nothing is explicitly shown on stage, it is more about the emotional turmoil that Layla goes through, rather than Joe’s physical and emotional actions.

KM– As the production is quite abstract in its performance style, it’s been easier for us to get our message across without being too literal. Abby’s script is already incredibly sensitive to the topic and having a predominately female cast and crew has really helped. Throughout rehearsals we’ve shared our personal experiences and used them to enhance the performance in a way that speaks to our lives and the experiences of other women in our society.

What does it mean to you as up and coming theatre-makers to bring your show to the Camden Fringe?

AC – I’m just so excited that people have to actually pay money to see a show I’ve written! It’s such a surreal and crazy feeling, and to do it in London where I live and grew up is a dream come true, it makes all the hard work feel so worth-it.

KM– As a company who aspires to help other up and coming theatre-makers in the future, taking our shows to the Camden Fringe has been an absolute dream come true. It really feels like the first step on the road to achieving our company aims. Both the White Nurse and Home cast and crew cannot wait to start our performances! We can’t wait to see what people think and we hope people love the show as much as we do!

If audiences take just one thing away from seeing White Nurse, what would you like that to be?

AC – Particularly for young girls: That ending a relationship can sometimes be your “happily ever after”, rather than beginning one.

KM– We want people to see that although physical and emotional abuse can trap you in a cycle, you can break out, there is hope. Layla’s journey isn’t easy but it’s worth the battle to ‘save yourself’ as our lovely Nurse says (Rebecca McGreevy).

And finally, to close – in one sentence only, why should people come to see White Nurse?

AC – You’ll come out thinking that you can take on the world – if Layla can do it, anyone can.

KM– White Nurse will break your heart and mend it in 8 doses, making it stronger than ever before.

So there you have it! Remember, White Nurse plays The Lion and Unicorn Theatre 7-11th August 2019 and you can find tickets here.