Kneehigh’s latest venture, a Carl Grose adaptation of Günter Grass’ famed surreal novel The Tin Drum, is a whirling frenzy of rage and darkness which centres on the woes of the human condition.

Oskar is born to a family caught in the midst of a doomed love triangle and he is not, I repeat NOT happy. He is born Woke and as he quickly recognises the omni-shambolic nature of the environment into which he has been thrust, he makes the decision to reject expectations and to never grow – to never resemble an adult; to never join ranks with the fools he disdains. Oskar is promised a tin drum by his mother – and a tin drum he shall have – this is not a child to be denied and he dominates with impressive force. With his drum in arms and his wise old grandmother’s voice in his ear, Oskar has the crumbling world at his feet and he appears to be responsible for its fate, marching to the beat of his own drum and emboldened by the surprising power of it, Oskar takes a stand against the perils of discord. In truth, this is a production that benefits from prior research. If you know Grass’s post-war novel, you’ll be un-phased by the chaos before you. For the rest of us, the programme is a welcome encyclopaedia because the story, while engaging, is complex and portrayed in such a way that the complexity is celebrated in a style bordering on utterly feral at times. Wild singing and dancing are affecting staples of the production and while beautifully stylised and anarchic, the narrative isn’t the simplest to follow without some background.

The story carries resonance though. As the narrative progresses, Oskar is distracted by life away from the crutch of the tin drum and we meet the Black Witch, a Hitler-esque domineering leader, complete with a salute fashioned to vaguely mirror the Nazi salute and with colour scheme leaving no doubt as to the desired visual parallel. This villain slowly chips away at social systems. Identities are evaluated, frayed and discarded or held on to with unwavering righteousness. Eventually, no one is safe from persecution… 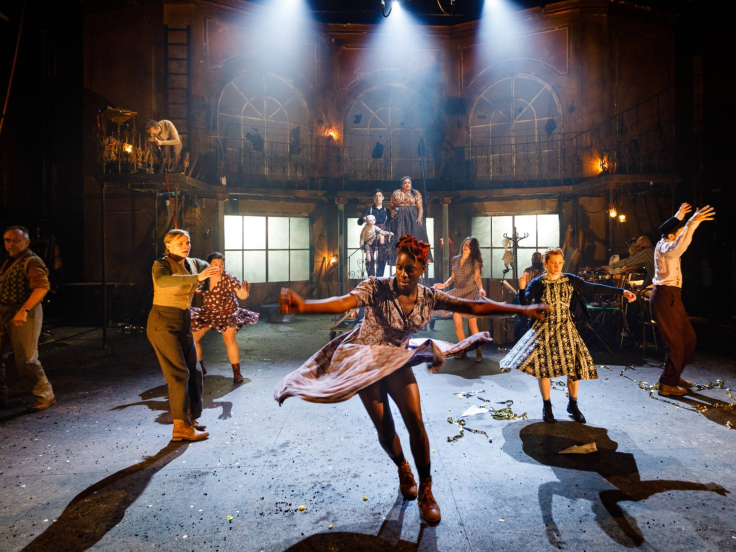 As ever, Kneehigh offer us a cast who are nothing short of fantastic. The energy required for this production is met and surpassed as they bring to life an ever revolving display of human folly and grim farce. Nandi Bhebhe impresses as the tormented Agnes Bronski – as Oskar’s mother, she is caring and decidedly on edge; aware that her son is undeniably odd but she loves him dearly. Bhebhe plays the role with a great gentleness which is reflected in her textured vocals which capture heartbreak with subtle beauty.

Damon Daunno offers a comical love rival with the voice of a talented choir boy – a voice which fluctuates between laughable pitch changes and genuine beauty in some of the more haunting arrangements. Rina Fatania stole the show for me in Dead Dog in a Suitcase and she again dominates the stage in The Tin Drum. She gives her roles such dramatic presence that it’s impossible not to be impressed and as Oskar’s ominscient grandmother, Fatania presents Anna Bronski as a wise woman with a mischievous streak.

Beverly Rudd is also marvellous and excels in every role she takes on here. With an accent back-catalogue to inspire envy and a faultless comic talent, Rudd has the audience in the palm of her hand as some of the most entertaining characters in the production – with her voicing of the devil in particular proving a real highlight. If your central character is a puppet, they’d better be good. And Oskar certainly delivers. Puppet Director Sarah Wright’s handling of our narrator and star demonstrates the magic of puppetry beautifully as she displays the many capabilities of a well made, brilliantly manipulated human imitation. Oskar is given a character of great clarity with stoic, upright physicality to parallel his unwavering resentment and brutally unforgiving views. Taking his life into his own hands, he unnerves and fascinates with a dark and unnatural intensity wholly disturbing in a child of three…

Lyndie Wright’s design and crafting of Oskar provides us with a strangely communicative face; eyes deep set and intense, face bearing no resemblance to the cherub paintings of three year old cuties. Completing the character, Bettrys Jones voices Oskar with a forceful, plosive indignation that is both comical and disturbing while Dom Coyote steps in as the older Oskar – and he also does a brilliant job of telling Oskar’s story with eerie incantations and the strongest voice in the company. 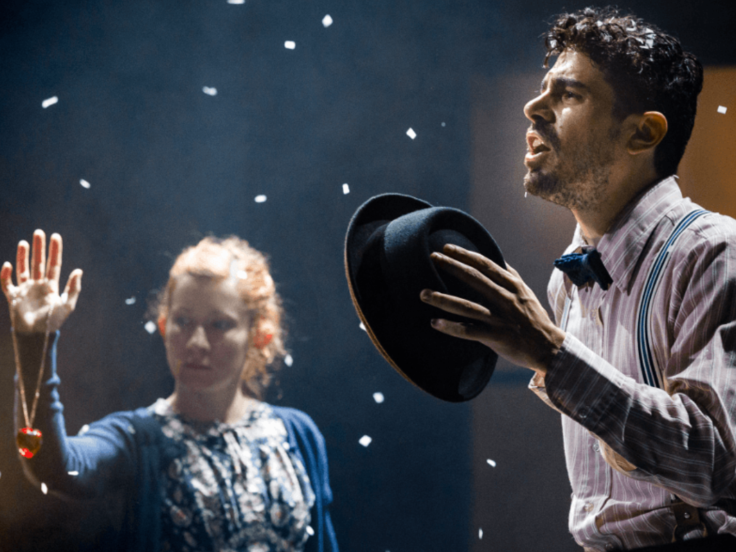 The chaos of the world which so exasperates Oskar is captured with great energy and darkness by director Mike Shepherd. Action is disjointed, loud and brutal and there is often so much going on that it’s impossible to know where to look, which isn’t necessarily a bad thing. Likewise, composer Charles Hazlewood injects the piece with jarring sounds which alarm as much as they impress – the sound is a free-for-all which works well with Shepherd’s direction to thrust a sensory explosion at the audience.

The frustrating thing about the sound in this production though, is how much of the narrative is lost to the enveloping, dominant sound of the band. The cast, while brilliant, don’t have the strongest singing voices, so I found myself too frequently at a loss as to what it was they were singing or talking about. Hazlewood’s sound design favours layering rather than the artificial clarity of mics, but that authenticity of natural voices comes at a cost in this production; unamplified voices, when set against a very loud score, find themselves lost and leave us wanting. I did find myself wishing I could follow the BSL interpreter to fill the auditory gaps more than once here! 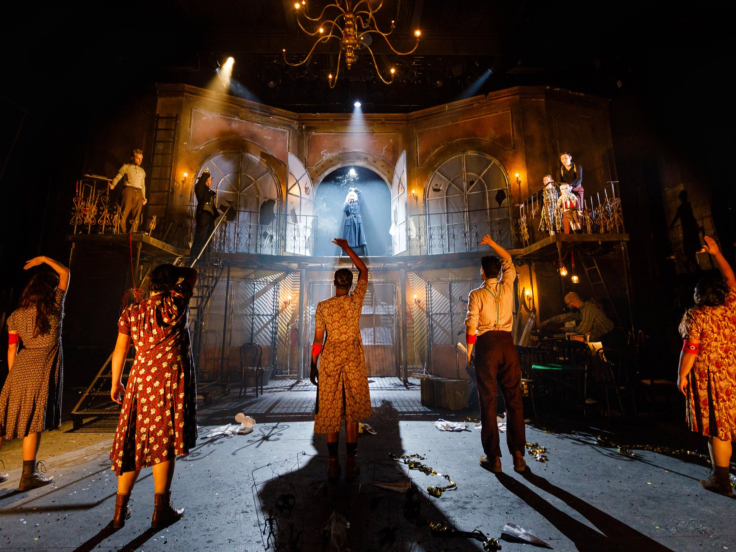 Darkness is made disturbingly beautiful in this production and amongst that darkness there are plenty of moments of humour – this is Kneehigh after all, and their balancing act of darkness and light is always an education. This isn’t an evening of light entertainment, nor is it simple – it’s a heavily sophisticated, complex story brought to life through excellent theatrical storytelling which captures the complexity, celebrates it and offers a message for our times: when fighting against tyranny and alarming discord, sometimes it’s necessary to march to the beat of a different drum – and sometimes that beat must be of your own making.