Encore, which came out last week, is the latest addition to Barbra Streisand’s studio album catalogue as well as her collection of albums spotlighting some of the greatest music created for stage and screen. It is also the latest evidence of her unrivalled position as queen of stage and screen music.

As most know, ‘the actress who sings’ got her ‘big break’ playing Fanny Brice in Funny Girl at The Winter Garden Theatre in NYC in 1964. This led to the kind of exposure every up-and-coming YouTuber dreams of, and secured her place in the starring role when Funny Girl was transposed for the screen.

What fewer people know is that Streisand had parts in two other Broadway and off-Broadway productions – and that the cast albums for these are still available; I Can Get it For You Wholesale (1962) and Pins and Needles (1962). Many will have heard her comically exasperated Miss Marmelstein as it was released on Just for the Record, but she sang a similar, titter- inducing song called Nobody Makes a Pass at Me on the cast recording which deserves just as much exposure.

If you haven’t heard the young Streisand sweep through What Good is Love? or gloriously descend from above stairs to below in Cricket to Picket or shimmy her way through Doing the Reactionary and Sitting on Your Status Quo on Pins and Needles then you are really missing out on some real early Streisand gems. Find them and listen. Listen carefully and you’ll hear the foreshadowing whispers of her inevitable future as an icon…

The new album, Encore, takes its place next to The Broadway Album and Back to Broadway as Streisand’s powerhouse odes to Broadway. She makes darn sure that we don’t lose sight of her comic abilities alongside Melissa McCarthy in Anything You Can Do while treating us again and again to her perfected diction and smooth tones preceded and proceeded in turns by soaring ‘belts’ (Judy Garland and Ethel Merman labelled her ‘the new belter’ back in the sixties for a reason). This is all most notably evident in some of the best tracks on offer – Climb Ev’ry Mountain with Jamie Fox and At the Ballet with Anne Hathaway and Daisy Ridley.

Streisand also continues to surprise me with her album content; in the case of Encore, it’s Who Can I Turn To (When Nobody Needs Me) with Anthony Newley- who knew such different voices could blend so refreshingly and strikingly? I had to listen to it a few times to really appreciate it, and it’s now one of my favourites on the album.

Not only does this album present us with ten stellar duets, it gifts us an additional four solo tunes including the Brolin-cameo’d Fifty Percent which declares once more that Streisand is a gifted storyteller in her music.

There has been some criticism of the dialogue introductions but I have to say that this seems rather illogical; it’s a Broadway album, with songs taken from the stage. The dialogue seems perfectly natural in the context. I happen to like listening to the charm and the comedy of Sheila toying with the casting director while Maggie et al giggle at her fearlessness. The fact that Streisand pokes fun at the unrelenting and apparently unwarranted accusations about her being ‘aggressive’ (or as translated for men- ‘assertive’) is very endearing. And very entertaining!

Encore serves as a show-stopping reminder of Streisand’s enduring love affair with the music of stage and screen, but it’s not new ground. She has held this territory since very early on in her career. The standards are where she started and where she seems most fulfilled- and why not? As ‘an actress who sings’, they seem perfect.

Somehow, I didn’t discover Streisand’s talents until 2006 – it did mean that almost all of her music was readily accessible then, and I was able to enjoy five decades of music instantly. Sixties Streisand is by far my favourite; the power, the tone and the purity are unrivalled and it has everything to do with the full-bodied, swelling, theatrical style across all of her albums in this decade.

What’s worth tracking down you ask? Her rendition of Who Will Buy? from the Broadway production of Oliver!, released on The Second Barbra Streisand Album remains one of the purest, most beautiful things that I have heard on record. Never Will I Marry, Non, C’est Rien, How Does the Wine Taste? and Keepin’ Out of Mischief Now are all similarly blazing examples of her varied and convincing character roles in songs on those transcendental early albums. 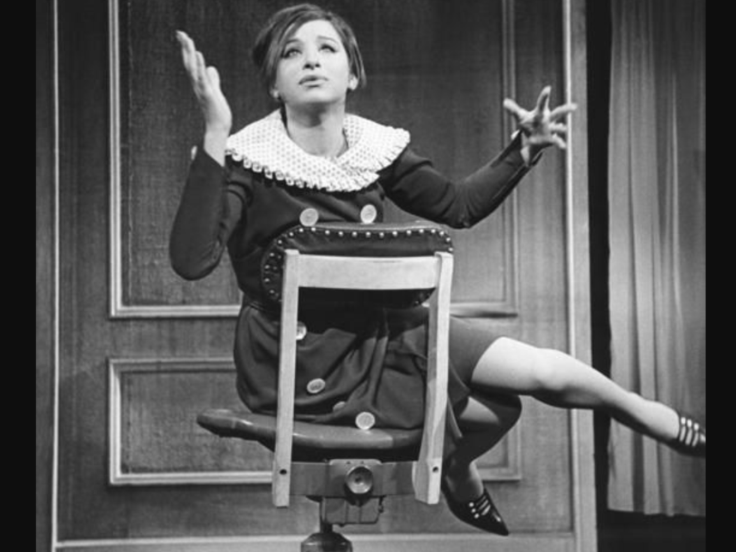 My love of sixties Streisand doesn’t mean that I’m not enamoured of the subsequent shifts in tone as her voice has aged like a fine Pope-worthy wine. She now has lovely breathy and sandy notes of great depth and feeling which adds a whole new facet of sound- and this evolution hasn’t diminished the purity. It has a different tone, but the voice is still smooth as honey (or indeed, like Buddah).

Interviews show that as a theatrical singer, Streisand approaches each song as a performance, and boy does it show. The cast albums, Broadway albums, movie soundtracks, The Movie Album and indeed, the showtunes which can be found snuggling between other classics on many of her albums- are all examples of her craft and accomplished narrative talents.

Is there any more evidence of Streisand being the Queen of Stage and Screen Music? Why, of course.

The ‘stage and screen’ albums of Barbra Streisand have always been well received, and rightly so; her gifts to the worlds of stage and screen span decades and are of enduring quality. The Movie Album carries much loved torch songs like Moon River, Smile and Wild is the Wind while also shifting gear for You’re Gonna Hear From Me and I’m in the Mood for Love. The Broadway Album offers classics such as Send in the Clowns, Somewhere and Not While I’m Around, but again also makes swift transitions in sound and style, offering Putting it Together (with a dialogue introduction which seems to be autobiographical in nature) and the comical Adelaide’s Lament.

Back to Broadway also documents the shifting tone in Streisand’s voice, gracing audiences with a gorgeously dramatic rendition of The Music of The Night accompanied by Michael Crawford, Speak Low and Some Enchanted Evening. The rich, full, swelling style remains, as does her inveterate interspersal of genres and pace, documented in the defiant Everybody Says Don’t and the classic Luck Be a Lady.

Some tunes were included in the fantastic compilation album Duets (brought into being a good few years before the more recent Partners), which also featured her duet with Sinatra on I’ve Got a Crush on You, previously released on a Sinatra album. Side note: get yourself a copy of Duets if you’ve found yourself to be a fan of hearing Streisand’s harmonic triumphs with very, very lucky people (cue song…).

The only thing missing from Duets for me, is the Hooray for Love medley with Judy Garland, which is just sublime (and can be found on Just for the Record). There’s also reason to mention her youthful rendition of Ding Dong, The Witch is Dead which appeared on a Harold Arlen compilation.

The album Memories is worth comment here for the title song Memory from Cats which for me completely eclipsed the original and remains one of my favourite tracks from Streisand. Actually, Just for the Record features some lovely, rare early Streisand recordings with plenty of Broadway-style delivery and is worth a look- if only for the well hidden but very pretty Between Yesterday and Tomorrow which sounds worthy of the likes of Les Mis or Phantom in style.

And it’s not just on albums that Streisand glorifies showtunes. Her live concerts also include some great renditions of songs like A Cockeyed Optimist from South Pacific and medleys from Gypsy (soon to be her next movie, it is hoped).

Her career is steeped in showtunes and if you want to hear every one, you’ll have to trawl through a phenomenal back-catalogue, including concert recordings- but it’s worth it, I promise – I even pinky promise…

The six decades of inimitable and jaw-dropping success following her Funny Girl debut, including number one albums in each of those six decades, has resulted in Barbra Streisand winning a phenomenal range of awards. Her impressive catalogue includes the rare combination of Oscar, Tony, Emmy and Grammy awards- no doubt one day there’ll be a Barbra or Streisand award, and she’ll win that too…

According to her official website, ‘…this ten-time Grammy winner’s 52 gold albums, 31 platinum and 18 multi-platinum exceed all other female singers in each category. The RIAA also notes that her 72.5 million albums sales tops its list of album sales by a female artist.’ All of this, and all of the above, as well as works that I am unable to document here without morphing my opinion piece into a full academic thesis, evidences Streisand’s enduring and well-deserved status as the Queen of stage and screen music.

Nobody should be surprised though, she did tell us way back when: ‘I’m the Greatest Star, I am by far, but no one knows it…’ Unsurprisingly, the former remains and is now very well documented, while thankfully, the latter is now no longer the case.

Here’s a shortlist of worthy ‘stage and screen’ recordings as well as Streisand’s soundtracks:

One thought on “Barbra Streisand: The Queen of Music for Stage and Screen”