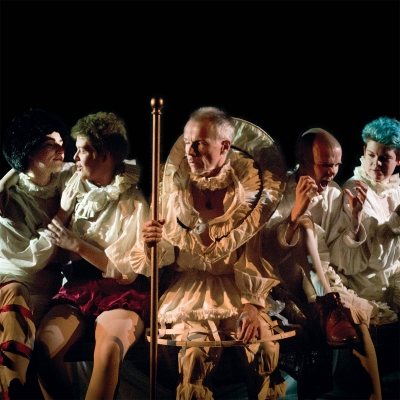 Virginia Woolf’s Orlando gets a revamp in the hands of Marvellous Machine Theatre Company. They’re taking the show to the Camden Fringe playing at Theatro Technis 31 July – 4 August 2019 (tickets here) so I caught up with to talk all things adaptation and Orlando…

To begin, tell me a little about the company and the name – when and how did Marvellous Machine come to be named and what’s the vision?

Marvellous Machine Theatre Company was started in Oxford in 2015. There’s a great tradition of theatre making in Oxford, but a lot of it is very conventional theatre performed from the usual classical repertoire. We wanted to bring something a bit different to Oxford’s theatre scene. The shows we make are fully scored, almost like films, by composer Becki Jayne Reed and it forms a really central part of what we do.

We are also passionate about female writers and strong womxn characters. The name came from our first show, which was an adaptation of The Tiger’s Bride by Angela Carter. One of the characters, an enchanted windup doll who Carter describes as “a marvellous machine”. We thought it was quite catchy and also had something around expressing that the company and/or the human body could be the marvellous machine that makes the magic of theatre happen.

You’re a female-led and ensemble-driven theatre company. What do you feel those qualities bring to your work as theatre-makers?

The ensemble-driven nature of our work means that everyone in the show feels fully part of making it happen. No one person is really in charge and there are no bad ideas. A lot of our work includes aspects of the supernatural, which can sometimes be difficult to bring to life on stage, but working as an ensemble means that there are 10 creative brains working on how to solve problems. I as director, then simply steer the ship in the right direction and make sure the vision of the show is cohesive.

What was it that drew you to producing Sarah Ruhl’s adaptation of Virginia Woolf’s Orlando as opposed to say, contemporary works or new writing?

Orlando the novel is 91 year old, but there’s still so much that resonates today, particularly with female and LGBTQ+ audiences. Sarah Ruhl’s adaptation really picks up on the fast pace and comedy of the novel but still allowed a lot of room for us to put our “Marvellous Machine” stamp on it.

Your pitch for Orlando as a character to intrigue is pithy; ‘Orlando: Poet. Lover. Adventurer. After an evening’s encounter with a traveller woman, Orlando is transformed forever.’ Can you tell us a little more – is this a tale of excitement, love, heartbreak or discover? Or perhaps all of the above?

Orlando is a fictionalised version of Virginia Woolf’s real life lover, the aristocratic Vita Sackville West, who was also a writer. Woolf uses the novel to playfully tease Vita’s literary ambitions and to dress her up in furs and pearls. Orlando lives for 400 years and right slap bang in the centre of the story, the character undergoes a life-changing transformation. The story is about self discovery and love, and learning to love all your contradictions, as the first step to getting what you want in life. Along the way there’s swashbuckling, queens, romance, sailors, traveler folk, and laughter.

You promise a ‘high-spirited romp’ from ‘the court of Queen Elizabeth I to 20th Century London’ – how do this adaptation and your production bridge this time gap and to what end?

Orlando the novel explores the ways in which society’s attitudes toward sex, gender and sexuality has changed over time. In many ways, our attitudes have regressed over time up until the Victorian era. During the Tudor period, men in platonic relationships would  hold hands in public. Virginia Woolf and the rest of the Bloomsbury Group – the literary circle in which she moved – were said to “live in squares and love in triangles”.

Many of them were queer and their financial and societal privilege allowed them to live on the outskirts of social convention at the beginning of the 20th Century, which is where the novel ends. We use music and shapeshifting costumes to let the audience know what period each scene is in. Musical influences in the show include baroque, Russian folk, Turkish music, sea shanties, and early jazz music which help carry the audience through the centuries.

You give an age advisory of 12+ for the show – what is it about the show that promoted this that we may need to be aware of?

The age guideline really is just a guideline. We have had parents bring younger children to the show before. There are just a few saucy jokes in the show.

What does it mean to you to bring your show to the Camden Fringe?

If audiences take just one thing away from seeing Orlando, what would you like that to be?

One audience member for ORLANDO said that the show left them thinking about how we should always treat people with dignity and respect, no matter who they are or how they identify, which was lovely to hear. We hope our Camden audiences feel the same way.

And finally, to close – in one sentence only, why should people come to see Orlando?

In the words of an audience member, it’s “Witty, inspiring, musically smashing!”

So there you have it! Remember, Orlando plays Theatro Technis 31 July – 4 August 2019 and you can find tickets here.