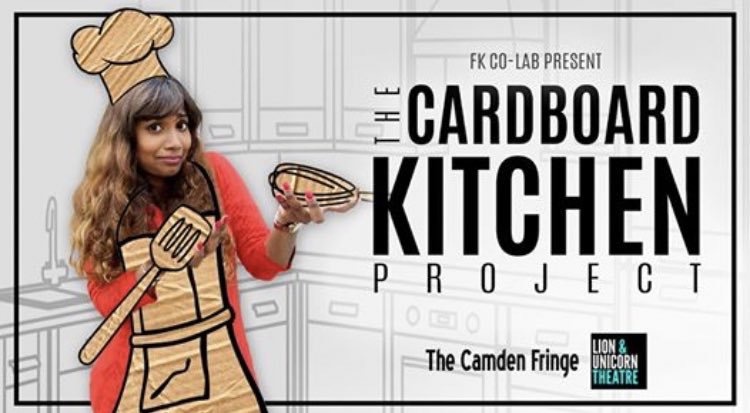 Camden Fringe is to host an interesting work this year as FK Co-Lab bring their production The Cardboard Kitchen Project to the fringe. It’s a company which seeks to champion fair, ethical ways of producing theatre as well as the increased representation of minorities and it’s a production which explores the importance of memories, culture and identity. The show plays The Lion and Unicorn Theatre from 19th – 20th August 2019 (tickets here) so I caught up with Director & Playwright and Artistic Director Faezah Zulkifli and team to find out about all things The Cardboard Kitchen Project…

To start, tell me a little about the company, FK Co-Lab. As a Singaporean company based in London, what has been the journey of the company up until this point and what’s the vision going forward?

Me and our producer Khai started this company together because we both believed in making theatre where we put the work first. Because sometimes when you focus too much on satisfying the audience or too much on ticking boxes, you lose the integrity of the work. So that became the ethos of the company, and whenever we made decisions what we would always ask ourselves is, “What does this do for the work?” A lot has developed since we first started, of course. Me and Khai have our own individual projects outside of this company, so we’ve developed a lot as individual practitioners and we try to bring this back into the company as the company moves forward.

At the moment the company’s moving towards fair and ethical ways of working and championing minority representation outside of Singapore, particularly as we are at the moment we are distinctly an all-female, BAME-majority international team at a Fringe festival. We’re also looking towards staging our London work in Singapore – and vice versa – to create an active dialogue on cross-cultural performance.

The Cardboard Kitchen Project is a one-woman show (starring Varshini Pichemuthu) – what drew you to this form over say, a full length play with multiple characters?

One of the key ideas we explore in The Cardboard Kitchen Project is how we pass down stories and memories, particularly when we encounter changes in our lives. We thought a solo performance would be the best form to push forward that idea because oral tradition is one way of passing down stories – individuals have stood in front of groups of people for hundreds, thousands of years. We wanted to play with the idea of a solo performer passing down a story about passing down stories.

Your character Jennie moves from Singapore to London and inherits a cardboard kitchen and books of family recipes – the mention of recipe books doesn’t quite raise an eyebrow, but the cardboard kitchen does. What can you tell us about it and its significance?

It’s strange, isn’t it? When we first decided on using a cardboard kitchen it was largely due to logistical reasons: this was meant to be a tourable, festival show, and we needed something that could easily travel around us. But it was this very fact that this space could travel with us, that became such a significant element of the show. Spaces don’t travel. They can’t physically travel.

When you move from one city to another, you can’t bring your entire living room with the walls and everything with you, and because of that when you move someplace else, you have to leave all the memories you attach to that space behind. So when Jennie receives an entire kitchen that travelled to her from another country, she doesn’t know what to make out of it. She has trouble attaching memories to it because she doesn’t know where it was before it came to her. The fact that the kitchen is cardboard is an interesting way of re-looking at the significance of places in our lives and the memories we make in them.

How did the show come to be built around the solid focal point of the kitchen? Does the show consciously tap into the symbolism or cultural significance of that particular place within the home?

You can find a kitchen in any home, anywhere, in a variety of forms. It’s a space that supports a variety of cultural plots, and that’s pretty important in a work where the premise involves a character moving from one completely different culture to another. What’s interesting symbolically though, is that despite this shift in cultures, despite the different kitchen configurations you encounter in new places, the raw ingredients you use in your cooking are essentially the same.

No matter where we are from, we all use onions, garlic, vegetables and all that, and we all throw them in a pot over a fire… but what comes out of that pot can be culturally different. So when talking about change in this play we aren’t just interested in the differences in culture, but the similarities that cause these differences to arise as well.

Jennie seems to dig a little too deep when looking through papers from the family, uncovering unpleasant history. Why do you think so many good stories adopt the structure of uncovering secrets and histories?

We all like gossip, don’t we? Or, as people would say these days, we all want the tea. But I wouldn’t say it’s the uncovering of secrets and histories that make a structure of a story a good one, but the emotional journeys the characters undertake through these discoveries. Because no matter how massive or dramatic the secrets characters uncover are, the emotions they undergo still remain relatable to the audience, and I think that’s what makes audiences connect to the character and to the piece no matter how absurd it gets.

The show is billed to explore ‘cultural inheritance’ so is there a message behind Jennie’s process of finding secrets within whatever is inherited in whatever kind of way?

The message, simply put, is that you don’t need a physical space or an inherited object to attach memories – cultural, and personal – to. We bring these memories with us wherever we go.

What does it mean to you to bring this show to the Camden Fringe?

To bring a Singapore company to a fringe festival in the UK? It means the best of both worlds. The process has been rewarding so far, because we’re working with people back home and with people here in London, to make Singapore theatre that is also London fringe theatre at the same time.

If you could have audiences take just one thing away from seeing the show, what would you want that to be?

We hope audiences would go back thinking about the unexpected places they keep the important memories in their lives. Like the kettle you don’t really think about when you pour your tea every morning, or the view outside the window. Especially when you live in a fast-changing city, you don’t know when that view is going to change.

To close, in one sentence, why should audiences come to see The Cardboard Kitchen Project?

Because we need to support ethnic diversity in the fringe, plus we have an actual cardboard kitchen set!

Now for the quick fire round of general theatre related questions…

Deanna Dzulkifli (Stage Manager): Coming from the dance world, and slowly transitioning into theatre, i’ve realised that i feel most inspired by elements that cross both worlds. dynamicism, body movement and relationships formed in the space tickle my senses the most. but since delving into this theatre world, theatre has inspired my love and appreciation for just the creation process in general. i appreciate each individual story coming into the process with the openness to create and to be vulnerable. in that way, everyone i’ve met/worked with since being in theatre has inspired me.

Lili Muslihah (Production Manager): It is really interesting how our bodies can become a part of the art that we make. I used to be a dancer, so nowadays as a techie I really enjoy working with shows that incorporate a lot of movement in their work; hence personally Physical Theatre and Musicals fascinate me most.

Etiquette debates – worthwhile or futile? Where do you draw the line? It’s a hot topic.

Aida Rocci (Dramaturg):Any debate is worthwhile! However, I’m always curious about what we mean by etiquette. Where do our behaviors rules come from, and how are they used to communicate with people around you? At some point in my life, I started questioning what respect is at its essence. That process informed much of what I think about etiquette and other issues, so I encourage people to define it for themselves. That’s where I’d draw the line.

Raycher Phua (Lighting Designer): Yes, I remember once when half of the lighting rig went out during the show and it was a race against time to fix it before the next cue. We did eventually get it sorted and the show went on without anyone but the lighting team noticing. I’d say that’s a win!

If you could bring change in terms of opportunities in theatre right now, what would it be?

Varshini Pichemuthu (Actor): I could go down the rabbit hole with this question but I shall focus on this for now. The diversity conversation is huge at the moment and huge strides have been made but the changes made cannot just be done for the sake of ticking boxes. If we wish to talk about truthful representation, then besides hiring BAME and female theatre creatives (both onstage and offstage might I add), changes need to be made to include those with disabilities.

Access needs to be created in theatre spaces as well for people with disabilities to be able to utitlise these spaces. It should not be something of an afterthought but something that is part of every theatre design conversation. At the same time, hiring BAME and female creatives to tell their stories on stage should be synonymous with the implicit expectation that they represent all BAME and female stories and that they have no other story to tell or that they will not be able/capable to act/direct/write other stories.

So there you have it! Remember, The Cardboard Kitchen Project plays the The Lion and Unicorn Theatre as part of the Camden Fringe from 19th – 20th August 2019 and you can find tickets here.