Sunset Boulevard is a famous staple of the musical theatre world. Based on the Billy Wilder film with Music by Andrew Lloyd Webber and Book and Lyrics by Don Black and Christopher Hampton, it carries us along at pace, following the fictional Norma Desmond who famously represents every outdated screen actress – with particular focus on silent movie actresses who lost their shine when sound made its appearance. Desmond takes every day with an air of emphatic glory or tragedy, sometimes courting both at once – recognised by some as a manic depressive and by others to be at least psychologically unsound, Desmond is a fascinating study of the aftermath of fame. She takes in a down on his luck Hollywood writer in hopes of getting herself back on the big screen, never realising that her glory days are well and truly over. Throw in a love triangle and some glorification of the artifice of Hollywood and you have yourself a cracking musical.

This production from The Curve, directed by Nikolai Foster, features five star performances in a production which doesn’t quite measure up… It’s an interesting mix, and there are many fine features, but a small few questionable choices create a frustrating oxymoron for me which chips away at the varnish of the lead performances.

Ria Jones is simply wonderful as Norma Desmond; wearing her delusions of grandeur like a badge of honour, she sweeps through scenes like a self-certified goddess. Jones’ vocals do Webber’s music and the lyrics great justice and she plants some well placed warbles to remind us that Desmond is in her twilight years. Jones’ Desmond takes melodrama to new heights with a commanding air even when vulnerable and crumbling – it’s a performance full of careful moments which gives this production an unshakeably worthy core.

Danny Mac makes a great counterpart as Joe Gillis, a bona fide hustler who shows glimpses of heart but is decidedly self-serving when it comes to his ‘relationship’ with Desmond. Mac’s vocals are strong, particularly on the title number and he captures the air of a dashing but essentially flailing Hollywood type beautifully. Catapulted into this is the sugar sweet Betty Schaefer, played with a sardonic twist by Molly Lynch who delivers some beautiful vocal performances throughout. Max Von Meyerling, a character almost as tragic and disturbing as Desmond herself, is played with an Adam’s Family Lurch-type air by Adam Pearce to begin with, but his arc is fascinating as his past is uncovered and while the character appears hollow at first, Pearce achieves some lovely depth over the course of the performance.

Set in the 1950s and taking in Norma’s mansion on Sunset Boulevard, the Paramount Pictures lot and the general atmosphere of Hollywood, the production aims high in creating an over-arching sense of opulence while also hinting at the artifice of the settings with under-sized grand archways and minimal set pieces. It’s a complex design dance from set and costume designer Colin Richmond. Choice pieces like Norma’s chaise and grand staircase offer a simple but effective marker of extravagance and Desmond’s costumes are brilliantly representative of her role as an ageing glamorous diva, standing out in the crowd via her feathers, deep dramatic shades and endlessly glittering outfits against the 50s A-lined pastel or vibrant primary coloured dresses of the youngsters. Those design features are very well conceived and the costumes in particular provide beautiful visuals.

Other design strengths include Video Designer Douglas O’Connell’s projections which are used rather heavily throughout. His videos are like instant ambience curators and offer layers of depth and flair when the production is in danger of appearing two dimensional. Lighting Design from Ben Cracknell also casts some notable spells over the course of the production, with the lighting sequences for Desmond’s first cluster of musical moments being particularly impressive. As Desmond works her way through No More Wars, Once Upon a Time, With One Look, Salome and The Greatest Star of All, Cracknell’s lighting adds texture and drama. Lee Proud’s choreography also allows the ensemble to capture the bustle of Hollywood filming locations well, but there are some sequences which feel less than crisp and less than energised.

Then there’s the issue of the oxymoronic choices…there’s a design flaw which nicked a carotid artery of this production for me: Norma’s going-nowhere staircase. Picture it: the grand, wide staircase overhung at the summit with a red velvet curtain. There’s an ancient organ and a richly upholstered chaise – the only set pieces to create Norma’s sprawling mansion. But imagine…Norma delivers a grand, sweeping scene in all her glory, complete with a diva song ending in a flourish… she ascends the staircase regally and… is stranded while stage hands trundle a scaffolding tower from one side of the stage to fetch her. She steps onto the contraption and freezes while they wheel the contraption back across the stage to reach a disguised door in the cyclorama. The magic wall opens, she steps through the door and is gone. A musical number plays out and Norma arrives for the next scene, and we have a repeat of this routine in reverse with only a scene playing in the foreground to distract us here and there.

Now, this could well be an intended continuation of the sense of artifice created on the Paramount lot; Norma’s lack of distinction between reality and fallacy grows across the production, so perhaps transporting her across the stage like a mannequin in this way is some inspired choice rich with symbolism. I found it hugely distracting and entirely at odds with the indications of opulence Richmond achieves so well with set and costume designs. Add to this the fact that direction of Jones as Norma includes distracting over-use of those stairs – going up just to come straight back down again, or getting half way up and returning, and it’s not great viewing. Had the stairs led directly to the hidden door, perhaps all the entrances would have had the same grand impact as the concept, but the prominent use of that stranded staircase is an unfortunate demonstration of how to break a spell! 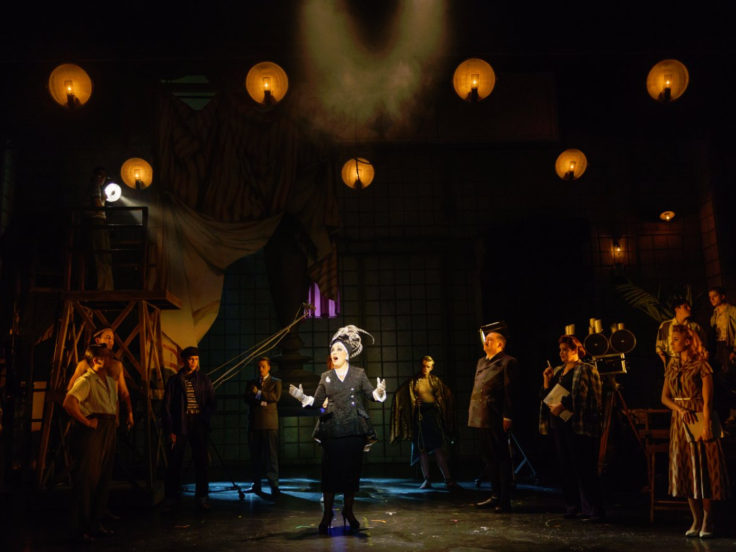 The music of Sunset Boulevard is well known, and there are some memorable performances in this production. Jones’ performances of New Ways to Dream is tender and full of misplaced hope while The Lady’s Paying and A Little Suffering offer a jazzier sound and some welcome energy when the melodrama begins to dominate. A Little Suffering also provides some nice comic moments while Sunset Boulevard provides Mac with a great vehicle for showcasing his passionate pipes. As if We Never Said Goodbye, recorded endlessly by theatrical greats, is performed by Jones with a definite impression of her being very much aware of its weight and import while The Final Scene secures Desmond’s place in the history books of histrionics.

With a gripping central performance from Ria Jones and some strong, charismatic performances from Danny Mac, Adam Pearce and Molly Lynch, this production certainly holds appeal. The strengths are in fact many, but I just can’t quite rationalise those puzzling design choices which forced the pseudo-stoical glamorous leading lady to be carted about, clad in gowns and jewels, atop a clunky scaffolding tower as if we could ignore such a contradictory vision…

Sunset Boulevard plays at Bradford’s Alhambra Theatre until February 10th before continuing its tour – you can get your tickets here.