Narvik, written by Lizzie Nunnery and performed by Box of Tricks Theatre Company, is cleverly framed around a seemingly dying man, who has fallen, alone in his house, aged ninety, and is unable to get up. If he isn’t found, he’ll likely die. While he awaits his fate, realising that his weakness will not allow him to help himself, his memories creep in and take hold one by one. It’s a bit of a slow burner, as there’s a lot of ground laid in the first twenty minutes or so, but as frictions come to the fore, the piece really takes hold and it’s impossible not to be sucked into Jim’s world of deep regret and inner rage long since locked away in his memory.

While the blurb places the greatest emphasis on his infatuation with a playful Norwegian girl, there are many other factors at play in Narvik. As his memories abruptly take hold and cease just as abruptly as they arrived, the narrative sweeps generous brush strokes to paint pictures of his childhood, innocent youth, and his inevitable disillusionment as the realities of wartime deliver an almighty gut punch. Joe Shipman is astounding in the role of Jim, which proves to be one of the most intensely demanding roles that I’ve seen in recent years- Jim is, inevitably, a constant in the action and shipman is required time and again to flick the switch from moments of shattering trauma to lighter moments of mundane work or a punchy exchange with Kenny, and at intervals, to morph back into his ninety year old self. With the turn of his heel, his rage or heartbreakingly tortured expression dissolves and an entirely different version of Jim takes hold; it’s remarkable to see such consistency in such an unrelenting role.

The relationship between Jim and his closest comrade, Kenny, dominates much of the running time and is rich with the complexities of living in close quarters with fear biting at the heels (whether acknowledged or avoided), while also harbouring hopeful desires for the future. Played by Lucas Smith, Kenny presents as a plain-talking, no nonsense geezer; he is a swaggering, profanity spewing, likeable ‘lad’ who is every bit the product of his strictly masculine surroundings, yet Kenny is a complex character and Smith portrays his inner turmoil with a quiet indignation, subtlety and a seething anger. Nunnery’s handling of Kenny’s story is skilful, calling into question an issue crucial to this period in history: what makes a man? Jim’s character likewise allows Nunnery to explore this somewhat damning label and her writing is thoroughly disturbing as Jim describes a particularly damaging event. Under Hannah Tyrrell-Pinder’s stylish direction, it’s a scene which builds and builds – and it’s a perfect example of all the elements of a production coming together for maximum dramatic impact. To slowly realise through Jim’s narrative what the initial clanging is, is a brilliant moment of dramatic theatre… 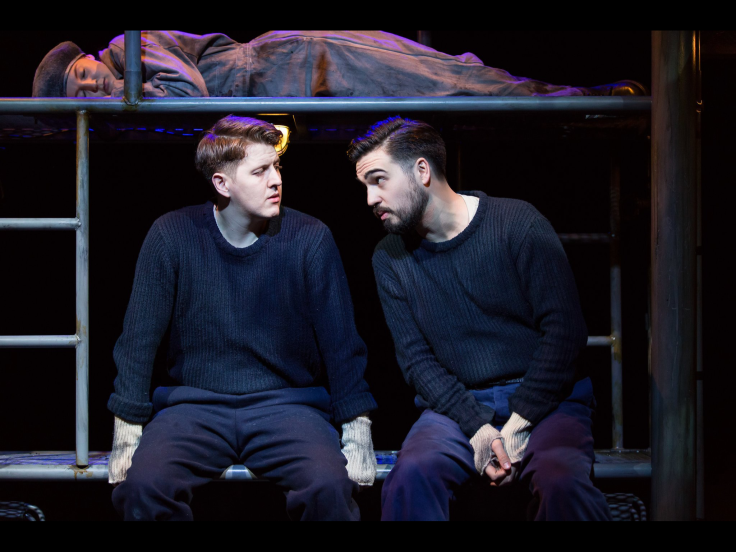 Jim’s hopeless love for a sweet girl met long ago also provides some brilliantly gritty moments with a climax which is heartbreakingly vivid and very, very dark. Else, played by Nina Yndis, seems nothing if not sweetly sincere in her early exchanges with Jim, yet Nunnery uses her character to lay bare some of the lesser portrayed threats for those at home during the war, particularly women living in German-held areas. Yndis captures Else’s defeat with great gravity, clawing desperately at Jim’s cold heart as she captures the hearts of the audience. I loved Nunnery’s handling of their reunion and the flaming speeches from both characters are written with fearless and grotesquely captivating detail, which somehow remains poetic. The band (Vidar Norheim, Maz O’Connor and Joe Hirons) subtly underscore the action with atmospheric music which tends to elevate the emotive scenes beautifully while Maz O’Connor’s pure, sweet vocals cut through the bitter realism of some of Nunnery’s grim descriptions.

Narvik does something relatively rare; despite the clear disparity in time dedicated to Jim’s experiences compared to others, the weight with which each experience is depicted is impressive. The play presents a narrative which illuminates the wartime experiences of both those away as well as those left to fend for themselves at home with sincerity and grit rather than sensationalism or excessive sentimentality. Nunnery does not just demand that the audience engage with the pain of irrevocably damaged young lads like Jim, she also demands recognition for the incomprehensible sacrifices and the horrific scenes endured by those who were not armed but nevertheless neck deep in the chaos of war. It’s a fine balance to catch and it’s impressive to see how Nunnery has presented both sides of the coin. Narvik is a gripping piece of theatre and Nunnery’s poetic, stark and often incredibly dark writing presents us with an impressive, cleverly conceived and stylishly presented  war drama.