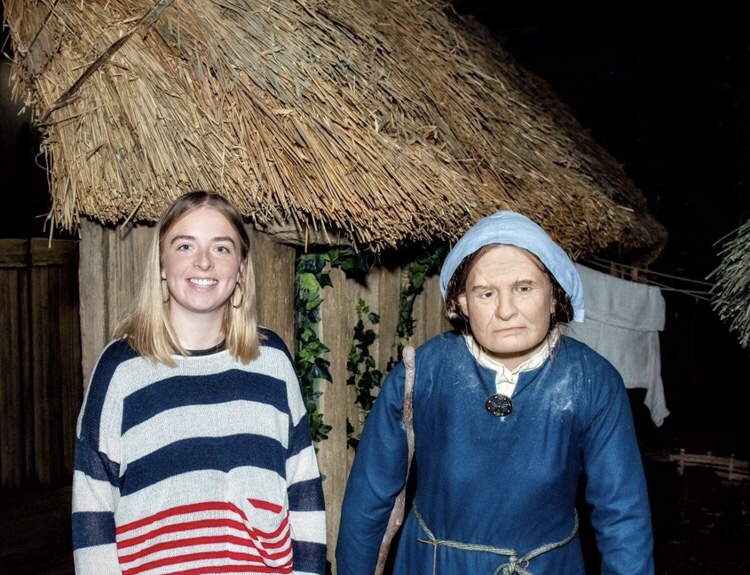 Maureen Lennon’s latest play, “The Coppergate Woman”, is set to take to the stage at York Theatre Royal later this month. In this new community-centred work, the Yorvick Centre’s famous relic comes to life to interact with modern day dwellers in the city of York. So with the Coppergate Woman’s stage debut just a round the corner, Lennon, an Associate Artist of Middle Child Theatre, Leeds Playhouse FUSE writer 2019 and Sphinx30 playwright, chats here about her latest project and what inspired her as she went about creating this “Mythic modern struggle” for the stage.

How did the project begin? Was it a commission? Was it always envisioned as a community project?

Juliet approached me just after Christmas this year and asked me if I’d like to write a community project for the theatre to be on this Summer. They wanted it to engage with York’s Viking history and how stories of our ancestors might bridge the gap between their world and our world right now. What could we learn from each other? I jumped at the chance. It was always envisaged as a project that talked about community, togetherness, and the power of storytelling in our societies.

What did you know about the Coppergate Woman/Vikings etc before you began writing?

I used to love the Jorvik Centre when I was younger. Every school holiday I’d drag my Dad for a day out. It was such a different experience to most museums, everyone says it but- the smell! Other than that I didn’t know much about the Vikings beyond a Horrible History book, so it’s been a real journey trying to dig into their mythology and learn as much as possible about what life might have been like for The Coppergate Woman.

Have you visited the Coppergate Woman in Jorvik Viking Centre? Your reaction?

I revisited the Centre when I first got commissioned to write the play. I hadn’t been in years. That’s where the idea for The Coppergate Woman struck me. There was something so confronting about the fact she is on display. A real example of two worlds meeting, she is in our world now whether she likes it or not. I wondered if she was lonely. I wondered who she had been and what she would think about me staring at her now. It felt intimate and yet so much about her was unknown. I wanted to give her the power to look at us just like I was looking at her in that moment. I wanted her to speak (although, obviously in reality I’m glad she didn’t).

Tell us a little bit about the play.

The Coppergate Woman is a story weaves myth with contemporary stories to see if that can help us understand who we are and who we want to be. It’s about the world we all live in, and the struggle to build a new world that’s better. The Vikings had an end of the world story in their mythology, Ragnarök, in our tale the Coppergate Woman is awakened to try and help four people of York live through their own version of Ragnarök. It’s about hope and heart ache and loss and starting again, together.

Can you describe the play in three words?

Have you worked on a community play before?

Yes, I’ve done a couple of different things and they’ve always been so brilliant. This is definitely the biggest community production I’ve worked on though and I’m so excited to write something that feels so rooted in York as a city and can hopefully speak to so many people.

Are you from Hull? Any York connections?

Yes I’m Hull born and bred so I’ve grown up popping to York for all sorts, particularly to the theatre actually which I feel a real connection to. We’ve always visited a lot. Me and my mum once got escorted out of a production of Death of Salesman York put on because we were crying too much at the end to make it on our own.

How does The Coppergate Woman fit into your general body of work in terms of themes and subject matter?

I think in my writing I’m always interested in the act of storytelling and what it can mean for communities. I’ve done several shows that were inspired by retelling myth or fable, often from a contemporary and feminist perspective. A show I co-wrote a few years ago, Bare Skin On Briny Waters, partly retold the wives tales in Arabian nights through the eyes of two young Northern women, it toured to York and I think it’s partly what made Juliet think of me for this project. I often write using music and song as well, which you’ll find in The Coppergate Woman. I’m interested in things that cut to the heart of us, that make us cry and make us hope.

What led you to become a writer?

I’ve always been obsessed with stories. I was the sort of kid who would try to read walking upstairs, on the loo, on the bus, under the table in lessons, anywhere. When I first went to the theatre I couldn’t get over the magic of it, I knew I wanted to do something to do with it, although it took me a while to figure out what. Like a lot of people I think at first I thought I would have to be an actor, but while I was at University I slowly noticed what I really wanted to do was write. It sort of hadn’t occurred to me that that was possible before. I was interested in what the words were more than performing them (I also wasn’t that great at performing them). So, after university I formed a company called Bellow Theatre with another writer called Tabitha Mortiboy and we started to write things and put them on. Writing to me feels like the most incredible way of trying to figure out the world.

So there you have it! You can catch “The Coppergate Woman” at York Theatre Royal from July 30th to August 7th 2022 and you can find your tickets here.