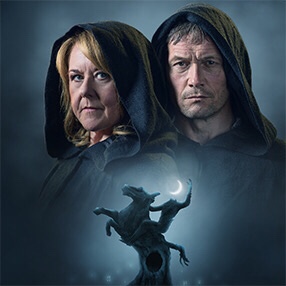 Philip Meeks adapts Washington Irving’s Headless Horseman tale for the stage and in Tilted Wig’s production, ambition (and over-ambition) is at the centre of everything.

The story follows a newcomer to the isolated village of Sleepy Hollow, where folk are living by their own rules and the residents carry the weight of local legends and superstition in all they do. This newcomer is quickly enveloped by the strange happenings and odd ways of those residing in this creepy place. The problem is, there’s a lot more to it than this and in such a busy production, the action becomes very convoluted and it’s difficult to keep up.

Jake Smith’s direction is full of good intentions. Transitions in particular aim for visual spectacle via energised and synchronised movement (Chris Cuming) and shifting set pieces, but the transitions are too frequent (some scenes seem to last mere seconds) and too fussy. Various styles and genres make appearances, sometimes quite randomly, and the cast work hard to bring the ambitious direction to fruition, but ultimately, The Legend of Sleepy Hollow is too full of big ideas for its own good, and loses its way.

Adding to sources of confusion is the issue of some insecurity with sustaining accents meaning that dialogue is lost at intervals. On the plus side, Wendi Peters offers some welcome gravitas and sustains the character and accent well, and is joined by Sam Jackson in offering secure performances within a cast that has its merits but needs to be more sure-footed to deliver the goods.

The production, in all its ambition, does achieve some impact in terms of striking visuals and commitment to stylised storytelling. From the cracking spooky opening moments to the glaring backlighting giving smoke-filled reveals dramatic impact, there are some great ideas here. Amy Watts’ set looms large and offers plenty of opportunities for variety of entry and exit points, and there’s also the inescapable impact of stereotypical sound design which embraces all tropes of audible horror: creaks and slamming and groans and singing children. Filipe J. Carvalho also conjures some nice illusions along the way, offering some engaging moments of trickery.

What is evident throughout is the passion for creating engaging storytelling which refuses to take a load off for a millisecond. So I can’t fault the energy and the sheer graft on display, and I can’t fault the kind of ambition and optimism with which this creative team and cast have approached their return to the stage after a long hiatus. But if I’m sitting here still clueless about certain chunks of this play, I also can’t deny the fact that this is a flawed and over-complicated piece of storytelling.

The Legend of Sleepy Hollow plays York Theatre Royal until October 9th 2021 and you can find tickets here.