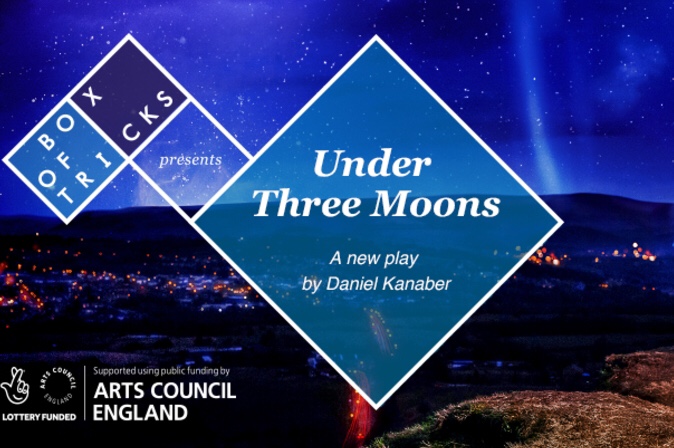 Daniel Kanaber takes on topical subject matter with an eye for authenticity and understated power in Under Three Moons. The play follows two comically mis-matched boys who become bickering men who become slightly older, more worldly men with disparate lives. Taking place across three nights across decades, this story seeks to dissect the ways in which men communicate with each other and navigate the highs and lows life throws at them.

Michael and Paul, played by Kyle Rowe and Darren Kuppan respectively, are an unlikely pairing. A school trip throws them together on the basis of alphabetised organisation alone and their initial connection proves to be pretty rank before it shakes off the stench and becomes something more substantial. While their friendship is unexpected and full of tension over the years, the various developments in their lives are not so much. Kanaber works hard to reject expectations of the dippy northern lad and the son of a businessman with money to throw around. The play succeeds in showing us what we know to be true: all that glitters is not gold; those who muck about at the expense of others tend to have their own woes; and all that drawls is not dumb!

Rowe’s fantastic transformation from the numbskull youth following the pack to someone altogether more collected and robust than we might have imagined is fantastic. By the same token, Kuppan’s take on Paul toys with expectations very nicely and his shift from intense teen to rather reckless man is very well played. Together they offer glimpses into different worlds behind individuals who grow up to be completely different kinds of people – the dynamic shifts gradually as time passes and we essentially see two blokes on a rocky road of friendship ducking and diving life’s full pelt missiles.

Kanaber’s writing excels in the early comedy and some beautiful sensitive moments later on. It also features a mild hint of topical tickboxing with the central themes of males and their handling of mental health (with an edge of toxic masculinity just about discernible) flanked by references to addiction and sexual harassment. Such details mark the piece as a contemporary social commentary but with so much ground tackled, it also begs for more development in some areas.

Adam Quayle’s direction is as understated and natural as Kanaber’s writing, keeping things ticking along nicely without that sense of monotony or static void creeping in which is such a risk with a two hander built around little more than conversations across the years. Transitions carry a nod to more stylish performance elements but the scenes are wonderfully simple, resting entirely on the written words. Katie Scott’s set design is also a lovely focal point – a kind of glassless hourglass with our characters sitting on a sphere of wood beneath a sphere of lights, above which hangs the ever present eponymous moon – they’re helplessly caught up in the sands of time it would seem…

It’s a strength and a shame that the very best of this play lies with the earliest scenes focusing on the characters as lads on that sixth form trip. The exchanges are brilliantly crafted and comically sound, gaining plentiful laughs and securing attachment very early on. Rowe in particular is hilarious and offers brilliant comic timing to the proceedings – I could happily watch an entire play built around the young Michael and Paul. But as it stands, the production somewhat dissolves the sense of attachment as the narrative swiftly progresses towards the more strained tales of the older boys, and later scenes could do with a heavier dose of that skilful layering of comedy and darker revelations.

Under Three Moons provides an insight into something filling headlines (on the rare occasion Brexit takes a snooze): the tragedy of poor mental health in young men who simply don’t talk. While the production may feel under-developed and top-heavy, when it’s great, it’s really wonderful and when it’s not, it is still an engaging and considered take on an important issue.

Box of Tricks Theatre’s Under Three Moons tours until November 2nd 2019 and you can find tickets here.