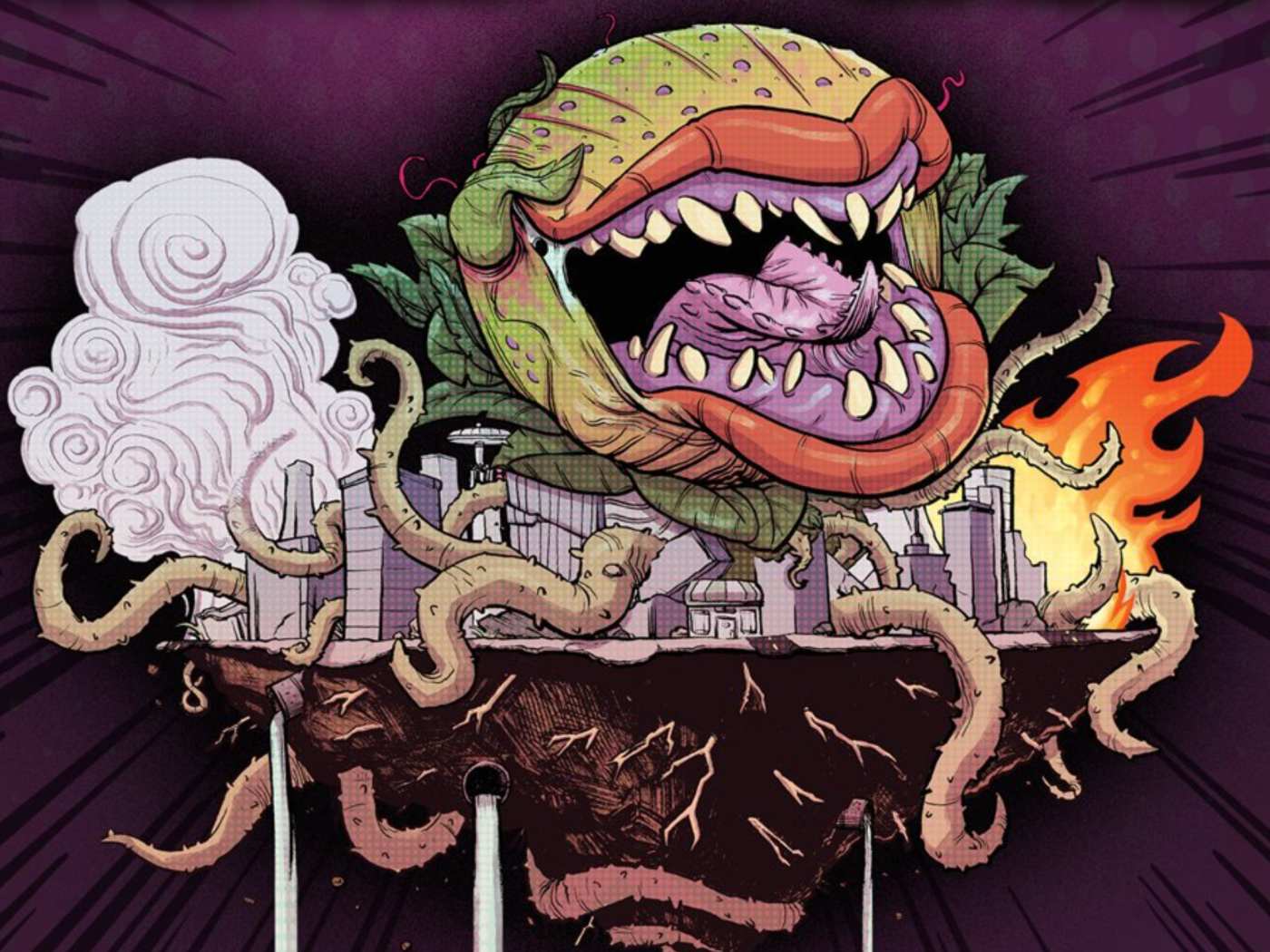 Little Shop of Horrors, the quirky cult hit musical about a nerdy guy and his rather wayward plant has landed in Leeds thanks to a collaboration between Bite My Thumb, Gravitas Entertainment and Cutting Edge Theatre. Based on the film by Roger Corman, the stage show is an ode to all things outlandish and while this production is rough around the edges, there’s buckets of enthusiasm on stage and the show is clearly a crowd pleaser.

In Little Shop of Horrors we meet Seymour (Ronan Pilkington) who works for the batty and ratty Mr Mushnik (Matt Stik) in his failing flower shop. Poor Audrey (Vicki Holmes) is a fan of bad ‘uns and leaves Seymour pining while she throws herself into the clawing mits of the barmy dentist (Joe Hamilton). Not one for doing things by halves, the tale features double the fun with two villains in Mushnik and the dentist, two heroes in Seymour and Audrey and one semi-charming creature somewhere in between…

Seymour, being the darling he is, wants to help the business and takes on a very unusual plant which subsequently turns Seymour’s deeply ordinary world upside down, starting a trail of gradual chaos which keeps us all somewhere between bemused and thoroughly entertained.

The show is capably led by Holmes and Pilkington as the airhead shop girl Audrey and the tragic misfit Seymour. The pair have a good rapport and do well to navigate an unexpected romance as over-dramatic as the surrounding show in general. Holmes channels the dim witted Audrey very nicely, teetering awkwardly on stilt heels and twirling her hair like a mindless muggins before throwing in a sweet moment of pure tragic foolishness for good measure.

Pilkington’s Seymour is great – he carries much of the show on his shoulders and Pilkington’s energised melodramatic performance showcases some wonderful comic timing and a flair for the geekazoid role. It’s his physical comedy which really sells Seymour for laughs and with Pilkington’s flailing matched with Holmes’ simpleton drawl, there’s plenty of comedy fodder here.

The third key player to steal scenes is, rather predictably, Audrey II, played with full entitled force by James Sidgwick – I don’t think any of us tire of seeing the Audrey II puppets and this production does not disappoint with its reveals and dramatics.

Neil Knipe directs and Howard Ashman’s Book and Lyrics (music by Alan Menken) generally fare well here, especially in the big finale of the title number. But the sound system was not on top form for the duration and at times some of the lyrics were completely lost. Vicki Holmes and the ‘Ronettes’ offer the best pipes, with Holmes in particular carrying the sweetest of notes and the strongest of tunes – Somewhere That’s Green is particularly lovely. With classics like Grow for Me, Suddenly Seymour and Feed Me in the catalogue, there’s plenty to like about the music of Little Shop of Horrors.

So with a charmingly whacky storyline and a substantial cast full of beans, this is good old fashioned panto-esque fun. It may well be rough around the edges, but the cast are clearly loving every minute and that beaming enjoyment is always a winning force. Little Shop if Horrors is set to entertain for just one day more, departing from the Carriageworks after a Yorkshire tour on October 19th 2019. You can find tickets here.