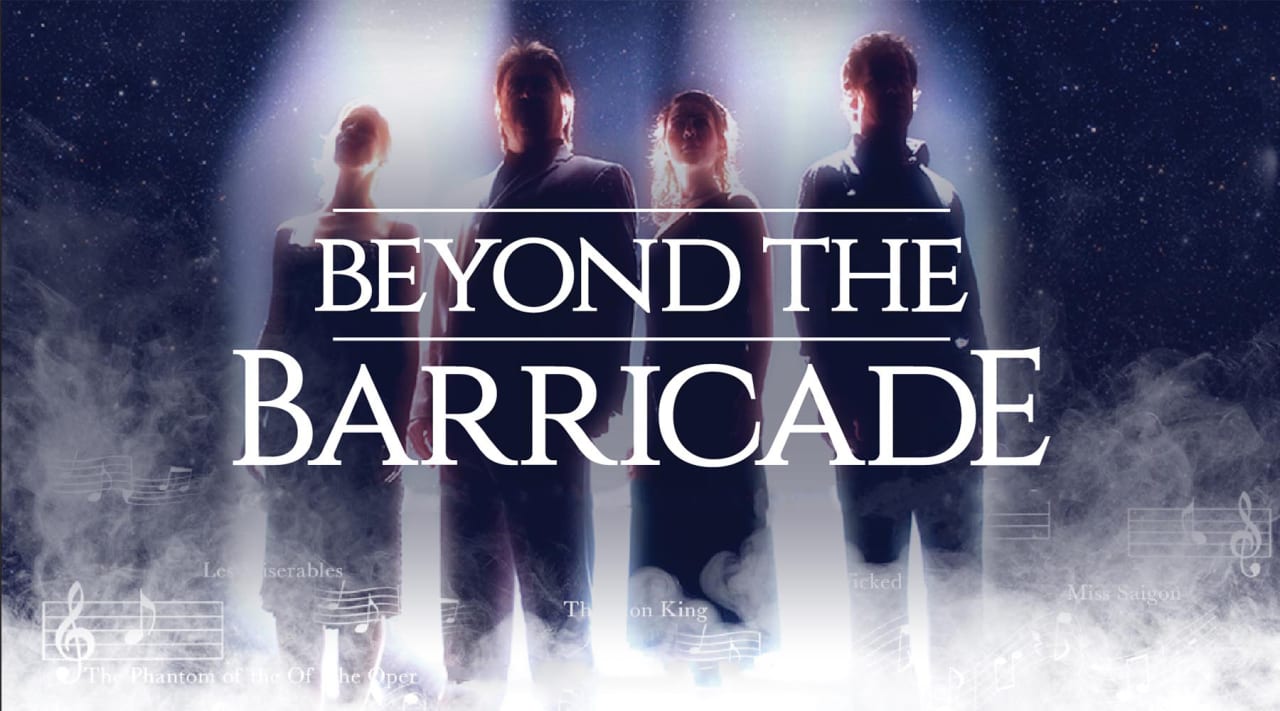 Beyond the Barricade has been around since the late 90s, celebrating the music of stages in the West End and on Broadway for appreciative musical theatre loving audiences. David Fawcett, Andy Reiss, Poppy Tierney and Shona Lindsay have all been principal players in major musicals – including Les Misérables of course – and in this Twentieth Anniversary Tour, they celebrate contemporary hits alongside the musical institutions we all know and love.

Beyond the Barricade does away with performance elements beyond the gorgeous dramatic lighting designs of Ed Railton…and the music of course. It’s interesting to see how the notable lack of grand, enveloping orchestral sounds associated with large scale West End shows is addressed by an accomplished band who deliver the magic of the music beautifully on the inevitable smaller scale. With just four musicians playing (Russ Kennedy: bass & tuba; Andy Reiss: conductor & keyboard; Dave Williams: drums & percussion; David Lane: keyboards) and four vocalists singing, the drama of Chess and the jolly numbers of Joseph are delivered very nicely indeed.

The show covers great ground and after an initial underwhelming take on Queen’s The Show Must Go On (rarely has this rousing rock song felt quite so incongruously neatly controlled), this show begins an ascent which sees the cast work their way towards the fantastic final sequence glorifying the music of Les Mis. There’s no shortage of West End tunes as the talented cast offer up renditions of iconic songs from The Lion King, Miss Saigon, Anastasia, Joseph and the Amazing Technicolor Dreamcoat and a ‘silly medley’ of children’s ditties from classics like Chitty Chitty Bang Bang and Mary Poppins – and that’s just Act 1.

Returning with refreshed energy, the group pay tribute to Mamma Mia, Chicago, The Phantom of the Opera, Starlight Express, Chess and Hamilton before closing with the greatest highlight of all: that Les Mis sequence. It’s in the powerful sense of ownership and affection for the material that makes the finale shine much brighter than anything in the preceding performances. The cast have all played the parts in extended runs and their connection to the music makes for a thrilling closing section, with Fawcett’s solo being a particular high point. If the whole set were approached with the same unwavering conviction and gripping command of the material, this show could be truly fantastic.

The standing concert form used here works well for the most part but there are times when the repeating pattern of standing with feet planted to deliver an expressive song results in a sense of lost lyrical significance – these are after all songs from musicals with narrative depth and it’s a shame that this is not always discernible within performances which seem more focused on delivering on vocals than communicating a sense of story.

Andy Reiss and Poppy Tierney are by far the most engaging performers and in their designated numbers we’re treated to some great theatrical moments. Reiss’ Joseph showstopper and Tierney’s Chicago Medley and The Phantom of the Opera performance are some of the best moments this show has to boast, with Reiss digging deep for the drama of his character’s conundrum. Lindsay’s On My Own is another highlight, as are the beautiful harmonies from Fawcett and Reiss and in turn, of those two with Tierney.

This is an affectionate celebration of West End greats and latest hits – the cast take us on a journey through time, pace, style and genres over two hours of vocal beauty. Fawcett offers gentle patter between numbers too, giving in to the charm of a terrible industry joke or a tongue in cheek jibe – no one is short changed on their entertainment here and the Phantom and Les Mis sequences alone are worth the ticket price.

Beyond the Barricade’s 20th Anniversary Tour runs until April 25th 2020 and you can find information about venues and tickets here.