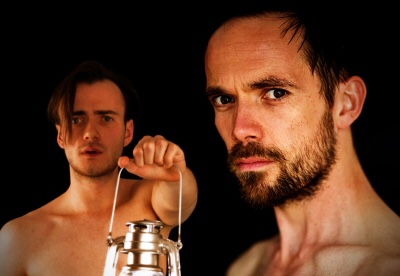 Ross Dinwiddy’s The Geminus is a cleanly selective new work based on Joseph Conrad’s story of a ship captain who harbours a fugitive. In Dinwiddy’s story, the captain and an enigmatic sailor clambouring aboard his ship in the dead of night form a connection born of their shared sense of isolation and a raw physical attraction.

John Black offers a captain plagued by his feelings of inadequacy having newly joined the ship and its crew, swaying between a kind of adolescent coyness with the mysterious stranger and a cold air of command towards his crew. Upon joining and donning his silk night suit, Hotson is faced with instantaneous smirking and thinly veiled ridicule from the crew which makes him perfectly susceptible to the infatuating dynamic of saving a handsome stranger isolated and in need.

Gareth Wildig is that handsome stranger by name of Leggatt. Wildig masters the art of the charismatic stranger with a tale to tell and makes for a very charming ‘accidental’ criminal – it’s easy to see the credibility of the blossoming bond in our leads’ depiction of an instant attraction which subsequently moves forward to fervent commitment at pace.

Beyond the central characters we find crew members to offer some mild comic relief from the rather static scenes between the men hunkered down in the captain’s cabin. Christine Kempell is great as Ma Gwen – a real breath of fresh air with her brusque manner and her comic defiance. While Robert Cohen provides a robust voice of reason and experience as Skeres, Ben Baeza showcases some great comic timing which brings out the strengths of Dinwiddy’s more subtle writing with well planted pauses and wry delivery.

The sense of secrecy and lawlessness of harbouring a fugitive is nicely paralleled with an underlying awareness of the lawlessness of their romantic connection within the context. However, the scenes of near-discovery lack urgency and while there are recurring opportunities for great action and tension in that dynamic, the play takes a much more stilted approach to the dynamic of one man hiding a fugitive in his personal apartments at the risk of his own safety and freedom.

The lack of urgency is exacerbated by Chris Postle’s lighting designs which call for dimmed lights between scenes, a feature which makes the transitions clunky rather than fluid. His lighting does reflect the setting and shifting moods of the piece well, and his sound design also captures the ambience of the high seas setting nicely, but the reliance on dimmed lighting for bustling repositioning of the cast is an unnecessary detraction from the action.

This is a solid play which is well performed by a very capable cast. Dinwiddy’s isolation and manipulation of an element from a Joseph Conrad novella achieves its purpose well, introducing a love story which feels very timeless. So while the premise and the framework of adventure and peril at sea seem to promise more high tension than we see in the delivery, the play is a very nice depiction of an unlikely love affair.

The Geminus plays the Tristan Bates Theatre as part of the Camden Fringe until 17th August 2019 and you can find tickets here.