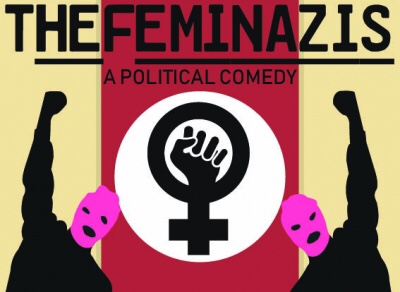 You know the drill: someone spews some hateful drivel from behind their keyboard/ webcam/presidential podium; there’s uproar and controversy; there’s inaction. So what happens when you’ve had enough of this cycle of madness and you have a willing bestie to take things into your own clumsy hands? The Feminazis non-starter, that’s what!

Libby (Lily Vosper) and pal Sal (Julian Briscoe) are sick of being surrounded by the eye-rolling rhetoric of those who cry ‘snowflakes’ and take to the streets or the web to vent their pent up venom. The duo decide to put some of these awful people (white cis men, most likely) in their place…well, in their graves. Because when the system doesn’t create change you want to see, the next step is of course to set up your own vigilante/terror group to round up the scum of society. The thing is, that bloke Dexter had a similar idea and was pretty damn good at it with his meticulous planning and sharp eye. This pair aren’t so…together.

Admittedly, Curious Dispute’s show takes a little time to sit comfortably – after a strong energetic opener and a well established comic friendship paraded, it gets a little odd and uncomfortable before steadily getting comedically better until it finds its way to some comic brilliance…with a few heavily obtuse lines thrown in to cement its status as a rough diamond. There are some real corkers in the writing, with the Thelma and Louise bit being a particular winner along with the back and forth about Libby’s dunce brother which is the show highlight for me.

This is a great cast too, very capably led by Vosper and Briscoe who have an on stage rapport which put me in mind of Burke and Dreyfus’ Linda and Tom more than once – she the bruiser and he the flustered numpty with both creating some great comedy with their combined hysteria and bickering. They’re joined by Charlie Round as the classic useless teenager Freddie who rivals their comic timing and has a deadpan delivery which can be a real hoot. Completing the cast is Sam Morris as the loathsome kidnapped troll who doesn’t know how to quit while he’s behind – he doesn’t get much of a shot at big laughs but certainly goes to town on the slimeball role.

The notion of disgruntled liberals being moved to small-scale terrorism is a weirdly entertaining one. They’re not cut out for it, that’s for sure, but their intentions are as strong as their ineptitudes which paves the way for some excellent comedy and some great writing. But the show moves beyond ridiculous misadventure comedy too, throwing in a dramatic hand grenade in the closing scenes to sprinkle the space with valid and resonant food for thought. It jars a little with the preceding style and action but it does allow the production to shift up a gear, bringing a silly comedy with pockets of grim humour to a dramatic finish very nicely.

I was pleasantly surprised by The Feminazis. The name threw me a little but I’ll give most shows a go – something named The Feminazis and going by the label of a political comedy included. It’s an interesting mix of the classic comedy duo dynamic, dark humour, well orchestrated slapstick, and a dramatic socio-political commentary on the quirks, trends and plagues of our times. I definitely recommend it if you’re willing to take a punt – it may just win you over too…

Unfortunately the Camden Fringe run at the Etcetera is now over, but you can follow them on Twitter at @CuriousDispute to keep up to date.