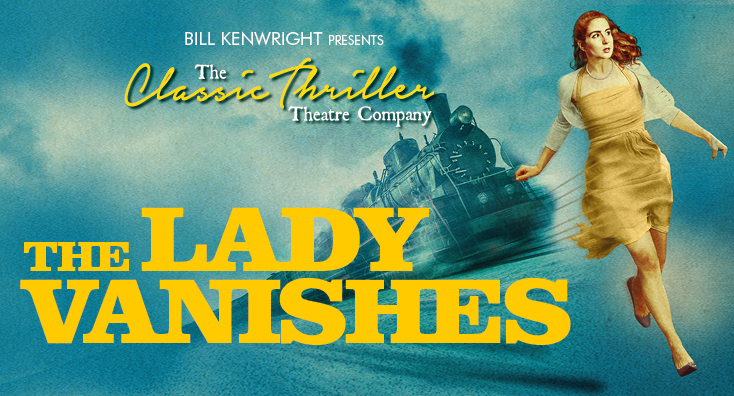 A train journey, strangers at odds thrust together by chance, a missing person mystery and a sparky young duo for puzzle crackers – The Lady Vanishes promises thrills and delivers…some of them. Based on the film written by Sidney Gilliat and Frank Launder and directed by the great Alfred Hitchcock, the show wavers between pacy and lively at its best and meandering and inaudible at its worst.

Brash American Blanche (an energised performance from Natalie Law) sees pal Iris (Lorna Fitzgerald) off at the station with giggles and fanfare. A bump on the head prompts Iris to fall into company with a sweet samaritan in Miss Froy (Juliet Mills). But no sooner do the two have a pleasant spot of tea than Miss Froy vanishes… Set against the backdrop of Nazi flags and imperious-looking officials (Joe Reisig is particularly effective) donning those horrid red armbands with pride, this is a wild goose chase with a dark undercurrent though the Nazi regime is a mere reference rather than focal point.

Fitzgerald and Boswell make for solid leads. Fitzgerald’s Iris transforms under the duress of her mystery solving mission from an incessant giggler to an undeterrable intellect with backbone. Boswell’s Max undergoes something of a reverse transformation from grumpy bookwriter with a sharp tongue to a likeable ally with some welcome strong comedic moments. The pair carry the production as a well-matched team and despite surroundings manage to impress in their own right, picking up the pace and energy and running with it when most needed.

Antony Lampard’s adaptation hangs on to much of the film script but that’s not always a golden stamp, particularly when some of the early exchanges are so difficult to follow in their attempts at a pacy opener. In fact, the first ten minutes set entirely the wrong pace and tone and could (and should) be cut without tears – begin with that bump on the head and you’ll have your engaging opener – muddled exchanges in opaque accents be gone! Under direction of Roy Marsden, the production finds its feet in the second act and for a little of the first (the act one finale scene is very nicely done) – once the clues start rolling in there’s real intrigue and the narrative takes shape. It’s mostly those opening clunky scenes and a few similar subsequent others with so many lost lines that puncture this production.

The star of The Lady Vanishes is designer Morgan Large whose set conjures the train with economy and just enough realism. The opening spectacle at curtain up is the best part of the production, setting the tone for a Hitchcock style mystery with smoke, large scale station backdrop and a pleasing symmetry. It’s a visual mirrored in the closing scene and it’s perhaps my favourite thing about this production – though Cara Ballingall’s beautiful vocalising and some of Fitzgerald and Boswell’s sparring exchanges in Act 1 nip at the heels as a close second.