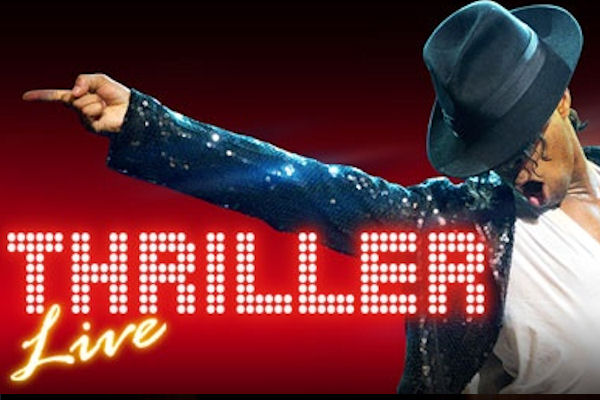 Thriller Live commendably tries a different tack when it comes to celebrating its source material. Thanks to creator and executive director Adrian Grant, this is no jukebox musical with loose narrative thrown in. Nor is it a jukebox musical with a whackily entertaining plot designed purely to string together hits. It’s a tribute concert which sees the ensemble recreate snippets of music videos or live performances interspersed with affectionately staged renditions of Michael Jackson’s back catalogue. Unfortunately though, the production is incredibly hit and miss and ultimately ends up a grand display of how a show like this can’t really do justice to the deeply distinctive nature of the work it attempts to glorify.

Director and choreographer Gary Lloyd (resident director Britt Quentin) leads a talented cast through hit after hit and this cast earn every penny of the ticket price, packing in the songs like there’s no tomorrow. But the quality of production and performances varies significantly… History proves a very flat opener but thankfully the show gets stronger as the various numbers begin to hurtle by. Things certainly pick up by the Act 1 finale which leaves the audience on a high note for the interval via an energetic rendition of Can You Feel It. Narrated segments are the stuff of tour bus circuits and are thankfully short-lived, with the cast doing their best to inject some humour and charm before the next number begins.

Act 2 goes a good way towards rescuing the show’s reputation as an entertaining celebration of pop music, starting with an enthused Wanna Be Starting Something and ending with the rousing encores of Smooth Criminal, Thriller, Black or White and Beat it. That’s not to say that Act 2 if free of the flaws seen in Act 1. The Way You Make Me Feel and They Don’t Care About Us carry a great energy and passion but this only highlights the fact that such things are missing from a good portion of the show overall. To boot, it’s not until Earth Song and the Billie Jean sequence that the brilliance of the source material is really felt with any gravity. Up until those numbers it’s a conveyor belt of tribute acts compiled into one show.

Blink and you’ll miss ABC, but keep your eyes open and you’ll see a shocking Rockin’ Robin sequence which makes use of a pixilated screen (Video content designer Colin Rozee) to provide our Jackson Five era Michael as dancers do their best to give the number energy and life in the real world. I mean really now, making great dancers back-up to a screen? Gosh. It’s a juddering style choice rivalled in its poor taste only by the sequences seeing our MJ character perform the dance sequences as vocalists sing the songs around him – or worse still, having our MJ dancer miming along to a backing track… It feels clunky in the moment and looks as underwhelming as it sounds.

Four vocalists share the load of delivering the hit parade. Ina Seidon has a great voice and a fantastically indefatigable stage presence, but she does not necessarily have a voice powerful enough to master this music. With a voice as rich and soulful as this, her mic needs to be at least twice as loud as others or the band needs to be pulled back significantly for her numbers. There’s no doubt that the voice is a beautiful one, it’s just not always audible and many lyrics are lost, bringing vibrant numbers to a muted stall when they should keep ascending for the duration.

Britt Quentin offers the gentler notes of MJ’s sound with great feeling and shines in songs like Smooth Criminal and Earth song. Trace Kennedy has the best voice of the bunch and handles the big notes and the small equally well while Rory Taylor is the resident talented ballad singer of the troop, giving his all to the likes of Dirty Diana, much to the appreciation of the audience.

Standouts on the choreography front are Kieran Alleyne who dons the glittered glove and hat for MJ impressions which border on extraordinary as he emulates those defining moves. Penny Smart is brilliant, proving that a great physical performance can be as much about an expressive face as it is physical contortions while Savannah Darnell and Lee Pratt bring a sense of joy to the moves – with Pratt bringing real charm and some welcome comedy to the role. If the flair of those four were paralleled by the whole ensemble and sustained across the production, this show as a whole would be considerably more impressive but as it stands, faces and postures seem to show that some of the ensemble are merely going through the motions with performances more than a little disengaged from the material.

Choreography (Associate choreographers: Yasmin Yazdi and Jo Dyce) ranges from a tame and slightly laboured aerobics class to very impressive, high-octane performances. Most importantly, the iconic visuals of the lean and the moonwalk are achieved and celebrated but there’s just no telling which way the quality-o-meter will go in any given number; one minute the ensemble are full of fire and the next they’re all but extinguished (with someone forgetting to tell the lively band who maintain the uptempo regardless).

The same goes for costume (from Shooting Flowers) – the iconic pieces get a good outing but a fair few numbers are painfully naff, as is the case with the central piece in Remember the Time – combine the lethargy of some of the moves with an eyesore costume and you’ve got a thoroughly problematic musical number – salvaged more than a little by Britt Quentin’s performance, but not by enough.

Set Design fares better, with Jonathan Park keeping lines clean and opportunities open, saving the grand visual for the eventual Billy Jean number. Nigel Catmur’s lighting is also excellent, bringing the buzz of the concert format to the stage in great big bright displays with pyrotechnics a great touch along the way too. The band, made up of Andy Jeffcoat, Tom Arnold, Matt Arnold, Johnny Copland, Rob Minns and Allan Salmon, is also thoroughly excellent and do great justice to the work.

The music of Thriller Live and the legacy of its star attraction remain undeniably impressive and the vocalists and dancers do entertain well overall. But the crux of the problem with this show lies with the wildly uneven production values and as a whole, it unwittingly declares that the source material far outshines this production attempting to emulate it. You’ll likely enjoy hearing the music live and a good number of the musical sequences, but overall this is not a show for the must-see list and there are too many clunky features in an established show like this to make me more free with praise.