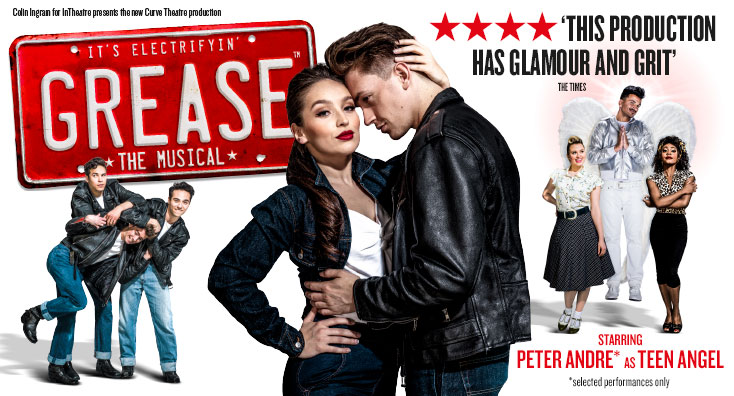 Director Nikolai Foster brings a ‘new’ Grease to audiences with this production. That is, he’s returning the story to its roots, pre-Hollywood and pre-shiny-Hollywood-friendly edits. So we’re back to the original, slightly grittier source with Book, music and lyrics by Jim Jacobs and Warren Casey but with a few of the hits conjured for the film thrown in for good measure. After all, riots could be proven lawful if a production of Grease neglected to perform You’re the One that I Want…

This is a big and playful touring musical with loud scenic and costume design from Colin Richmond. We’re in high school again or out at the outdoor film screening  (Projection design: Douglas O’Connell) in no time at all and the show goes big for the iconic hit Greased Lightning which arrives complete with a good dose of spectacle. Choreography is probably the overall highlight – Arlene Phillips has the ensemble working hard on exciting fast-paced sequences which feel fun and fresh with plenty of quirky footwork and fire.

Dan Partridge makes for a distinct Danny Zuko, shaking off some of the oil and swagger of the better known takes on the character in favour of a much more measured approach. Martha Kirby reinvents the Sandy Dumbrowski role somewhat, expressing the angst the character by dropping the popular sugar-sweet affectations in favour of playing her as a no-nonsense intelligent type. Nowhere is the departure more beautifully notable than in Kirby’s raging showstopper take on Hopelessly Devoted to You which is easily the vocal and dramatic highlight of the production.

Rhianne-Louise McCaulsky is a fabulously sharp Rizzo. As the production plays more towards credible dramatic performances rather than for laughs, Rizzo’s drama receives its due, allowing McCaulsky to go to town on the pains of the character which are beautifully expressed through an emotional performance of There Are Worse Things I Could Do. Louis Gaunt meanwhile makes for a perfect confused puppy in Rizzo’s wake as the tragically lustful yet likeable simple-guy- to-a-fault Kenickie.

Jessica Croll’s Patty Simcox is perfectly needy as the designated over-eager dweeb but again, the character is given credibility in dramatic terms where she might otherwise remain a cardboard cut out ‘geek’ – the chat with Miss Lynch in particular goes a long way in giving a peripheral character like Patty some well-deserved depth.

Comedy isn’t thick or fast here but it arrives to great welcome in the shapes of Corinna Powlesland as the sardonic and twinkle-eyed Miss Lynch and Darren Bennett as the hip shimmying over-energised firecracker Vince Fontaine. Fontaine is actually the funniest character by a long way here and Bennett approaches the role with a wild energy I’d have liked to have seen reflected elsewhere in the production. Peter Andre’s brief stint on stage as Teen Angel predictably prompts adoring screams straight from the vaults of teen crushland and he plays his part like the pro he is, smirking knowingly and ploughing on through his number over the din.

The show proudly declares itself a ‘new’ take on the 1972 show which was subsequently transformed for the screen via many edits and additions. In fact, the film gets a raw deal in Tim Bano’s programme feature which could indicate no love lost between stage and screen takes, but hey, facts are facts. Speaking of which, the fact here is this: the reinstatement of cut or edited songs lost from the original during the movie process aren’t at all memorable or impressive. It has little to do with viewing this show and the movie comparatively I hasten to add – this show just doesn’t make the re-addition of those songs exciting enough; they feel like fillers rather than great new bonus features for an already immensely popular story.

On the flip side, the show’s casting and re-invigoration of the characters is wonderful. They’re not perfect, but they’re a far cry from the carbon copy approach many touring shows are taking currently. Here, Sandy is a brunette with a mature voice (gasp), Danny is really quite fair and not overly cock-sure (an improvement to be sure), we finally have real diversity within the bubble of central characters (about bloody time), characters are sporting cautiously updated costumes (eyes widen across the globe)… and Sandy does NOT sport a replica of that iconic film costume (please excuse me while I faint)…

It’s certainly high time someone was brave enough to launch a production of Grease which stands proudly on its own two feet – I only wish the show as a whole was more impressive. As it stands, it too often feels like it’s plodding along rather than flying by. Bursts of energy impress at intervals rather than being a consistent feature. Some songs have inaudible lyrics and some performances aren’t sustained well enough. Even if this show is commendably returning Grease to its roots and reclaiming a story diminished for Hollywood, it’s not yet in a position to take the pedestal.

Regardless of gripes, Grease will always entertain and this show continues that tradition. The cast and production tell a much beloved story well and with a refreshingly stand-alone approach – most important of all, let’s hear it for a show bravely bypassing movie imitation!

Grease the Musical is a new Curve production and is presented by Colin Ingram for InTheatre, Donovan Mannato, William Sinclair, Hunter Arnold, Ricardo Marques and Araca. It plays at The Grand Theatre and Opera House, Leeds until July 20th 2019 and you can find tickets here. The tour then continues until October 2019 and you can find more information about tickets and venues here.