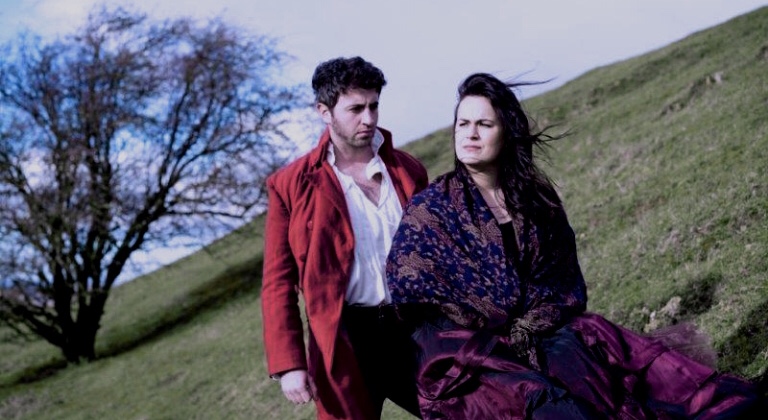 Emily Brontë’s Wuthering Heights is quite frankly one of the best works in the English literary canon. With its tempestuous narrative and love to hate characters, it’s not only a gripping read but also a gorgeously crafted piece of fiction. Bringing such a work to the stage is surely a daunting process but undeterred by the dark brilliance of the source piece, Heartbreak Productions are out performing their take on Brontë’s work in outdoor spaces.

A cast of five tackle the titan and manage to bring Brontë’s complex characters to life with aplomb. Housekeeper Nelly (Samantha Dart) knows the ins and outs of this Yorkshire melodrama in which the young are corrupted at best and tormented at worst; where the grown-ups are self-serving and tied rigidly to convention and class edicts; where few find happiness and fewer find love or affection.

Nelly is both our narrator and our medium who happens to have been overtaken by the spirit of this housekeeper (more on that later). Dart’s shift from well spoken medium Dorothea to the broad Yorkshire frankness of Nelly is nicely done and Dart’s performance as the put upon housekeeper is full of resigned wisdoms and bitterly hopeless concern for her charges.

Ben Thorne is an excellent Heathcliff. He marks the transitions of the character over time with subtle shifts which culminate in a deeply repellent villain who makes the pity earned early on nigh on impossible to find later. It’s a common debate as to whether this ‘tragic hero’ maintains any warmth from a once sympathetic readership and I’ve always erred on the side of NO, so I was gratified to find Thorne’s take on the character to be unreservedly poisonous by the end of it all! It’s a brilliant characterisation which is well matched by the tempest-tossed performance of Kate Gee-Finch as Cathy.

In Gee-Finch’s performance we find another complex character given a skilful turn on the stage and it’s a dark performance with flashes of great manipulative pain and alarming dramatics. Like Thorne, Gee-Finch has her work cut out for her when it comes to marking Cathy’s arc from gleefully feral young lass to the deeply unpleasant and vindictive woman who marries for reasons which are cruel yet somewhat poignant. Brontë certainly knew how to sculpt controversial characters…

Through the actions of Heathcliff and Cathy, the cycles of abuse at play in this text continue painfully onwards as Heathcliff torments Isabella Linton, the woman he lovelessly marries, Young Cathy, his own son (also played by Gee-Finch) and poor Hareton (Benjamin Darlington).

Elloise Thomson makes for a greatly sympathetic victim as both Young Cathy and Isabella, showing some great dexterity in betraying glimpses of Young Cathy’s own ingrained cruelty no doubt inherited from her much less sympathetic mother. Darlington is likewise a great victim as the deeply sympathetic Hareton but also impresses as the imperious Linton in earlier scenes.

Now, the framework for this production is definitely a little muddled and lacks the surface credibility of its sister productions of previous years. We have the same play-within-a-play set up but here the choice doesn’t find instant success the way others have.

The framework for Much Ado was local actors at a village féte putting on a production – great. For Pride and Prejudice we brilliantly found ourselves at a lecture of sorts on the importance of etiquette, with the play itself being illustrative of the points made; perfect. Here, we meet a gaggle of scientists (the Society for Scientific Research) trying to prove the existence of spirits complete with medium and naysayer from the press there to record everything. Promising, but from here it gets muddy.

Our medium is overtaken by the spirit of housekeeper Nelly Dean who begins to tell the tale of two spirits on the moor. To get to the bottom of the story, the gaggle of scientists and naysayer take places as the characters Nelly describes.

The incongruity is that the scientists and naysayer must of course begin to genuinely act out the story being told (which they do, excellently) with the assumption being that they get caught up in Nelly’s story enough to give dramatically charged performances though they themselves are not possessed by the spirits of the characters they play…or at least not so overtly as is the case with Dorothea. The ‘scientists’ speak as if it’s all very spooky but quite clearly it’s not – the spookiness never really comes to fruition. It’s not terrible as far as narrative frameworks go, but it’s not great either and previous productions fared far better in this respect.

Wuthering Heights is clearly a great choice for this ensemble who get to flex their acting chops and in doing so deliver some impressive takes on famous characters. They’re a skilled ensemble who do great justice to the characters as written and under the direction of Alice Kornitzer. Particularly pleasing is that Heartbreak Productions have edited healthily but not steered clear of the grim drama of the piece by any means. It’s a production good enough to prompt me to reach for my copy of Brontë’s gorgeous novel once again – and on that note, I’m off to spend another afternoon on the Yorkshire moors circa 1847…

Heartbreak Productions have a number of Productions currently touring, including this one. You can find more information about shows, venues and tickets here.