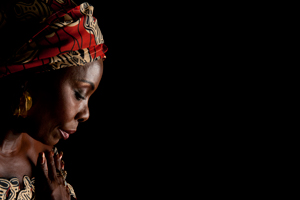 Our mucky political waters have caused much controversy and consternation and in Three Mothers Matilda Velevitch offers a moving and reactionary piece of theatre which explores refugee experiences.

When it comes to refugees, most have at least a vague awareness of large scale statistics; most know of those heartbreaking news stories and the disturbing images of the news cycle…and that horrific picture capturing the indiscriminate cruelty of seeking a better life. What this play does is give refugees across time and continents air time. It gives a problematic and very real crisis of our times individual faces and stories told directly from character to audience with no barrier in between and it’s a play which provokes reflection as much as emotional connection with the three mothers we meet.

Agi Nanjosi is fantastically scene stealing as the fearless Khady, a charismatic woman full of life who shares with us a wry take on the wisdoms and beliefs her community lives by. She also shares with us an unshakeable determination and the comical commentary of a woman who suffers fools begrudgingly – albeit a comic commentary heavily peppered with harsh realities with both sides of her life experience equally well played by Nanjosi.

Khady is a mother struggling to raise her children and run a business in the absence of her husband. Like most mothers in Senegal, the hope of a better future lies in the process of sending a son to build a future in Europe, supporting their family from a distance. The trouble is, the journey from Senegal to Europe is a treacherous one and waiting for news tests the deepest recesses of hope and so Khady, along with Velevitch’s other characters, prophetically points out that ‘hope is not a strategy’. It is however the only option remaining.

Roberta Kerr is a real force in this production as Gisela, a highly strung, strong-willed and deeply feeling daughter of a refugee who now seeks to help others just like her mother. She returns to Bavaria after spending her whole life in England and must re-adjust accordingly. Gisela, just like Khady, has comic material attached to her character and her hyper-sensitivity to a variety of gripes gets in the way of her willingness to do good.

Gisela watches the same news cycles we’ve been seeing; capsized boats, bodies in containers, child fatalities specified but never enough of a catalyst for real action. She reacts with passion and rage that we should all experience when those stories are reported. Velevitch doesn’t preach and nor do her characters – Gisela’s reactions aren’t lectures, they’re often a wordless display of grief and it’s in those moments of pained hopelessness that Velevitch leads us to contemplation of how desensitised we have or have not become.

Victoria Brazier is perfectly tragic as  Erika, Gisela’s mother – a refugee seeking sanctuary in a time before the lifelines of communication. Erika is expelled from Sudetenland in 1945 and must find her way to sanctuary elsewhere. Brazier makes Erika’s desolation as palpable as her desperate determination to survive and it’s in Erika’s experience that the biggest emotional pulls lie; there’s nothing quite like a mother and infant in peril to inspire the deepest of reactions. Like all of Velevitch’s characters, she’s simply a mother who wants the best for her child.

Jane Linz Roberts’ designs create efficient space indicative of multiple locations without making anything absolute. Under direction of Janys Chambers, this same fluidity is an integral part of the narratives crafted to intertwine, overlap and collide. In a stroke of slick theatricality and flair, Khady may be sharing with us the vexation created by her business rival and will engage with the other actors on stage who are simultaneously in place and in role as Gisela and Erika. While the actors may appear to interact, the characters remain in separate spheres somehow, crossing paths on another plane. In the same vein, Khady’s son crosses paths with Gisela and Erika gives us more background to Gisela’s own story than we ever get from her. It’s a subtle but powerful display of just how intertwined we all are.

Three Mothers looks at the refugee experience from vital, humanising angles; not just from the perspective of those making dangerous but necessary journeys but also those who await news of their loved ones and those who benefit from the brave journeys of others. Not only is it an engaging and well-crafted play, it’s a valuable statement piece about the most basic of human needs and rights.

Three Mothers is presented by Useful Productions and as this was its final stop on the 2019 tour, there are no more planned performances. I will however recommend that you keep a keen eye on the cast and creatives of this show!