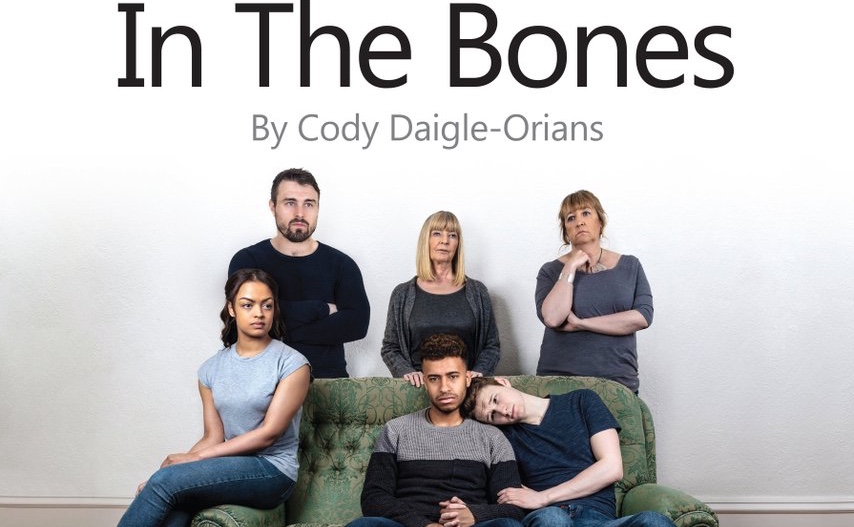 Families. Love them or loathe them, they’re a complex muddle of individuals and it’s never too difficult to find frictions beneath the surface. In the case of Cody Daigle-Orians’ In the Bones, there’s not much digging to be done; the anguish of this family is evident from the moment we enter the studio space to see a broken woman weeping in her underwear. She’s Dee: mother of a soldier who killed himself and she’s the picture of vulnerability and unspeakable pain.

With direction from Joe Geddes, the play follows the aftermath of Luke’s suicide, looking at the impact of his death on those closest to him. There’s more to his death than can initially be perceived and it’s in the gradual revelations that much of the power of the play lies. The play has poignant moments which are as well played as some of the hot headed flare-ups but there are also some less convincing scenes both in terms of moments of comedy and upset and it seems likely that considering the varied subject matter, the play is intended to be more emotively gripping than it was here.

The production uses filmed segments in an episodic approach to the narrative. Video clips filmed by the phone-obsessed Luke (a tender, meaningful performance from Jesse Wright) shift us year to year very nicely and provide a vital connection with the melancholy character we never meet in the flesh, only in relation to the space he left behind.

There are some great performances from an accomplished cast with Julie Root at the centre as the mother in turmoil. Prue Griffiths gives us the classic jolly aunt in Kate, capturing all the elements of the potty mouthed fun aunt as well as the flawed do-gooder with a relatable sense of uselessness.

Aside from Dee wearing her grief like open and infected wounds, sister Chloe (Sherelle Armstrong) and boyfriend Ben (Ben Sherlock) are the most in pain here, not least because the merciless Dee cannot consider anything or anyone outside of her own heartache. Sherlock provides quirky comic relief as the sweet, slightly geeky one as well as the desperately sad lover left behind by a family not ready to include him in their fractured inner sanctum.

Chloe is easily the most sympathetic of characters here, caught between a rock and a hard place and Armstrong skilfully strikes an apt balance between emotional trauma and youthful optimism. Late on the scene is Kenny (Luke Goddard), Luke’s army comrade who happens to be an endearingly awkward kind of guy and Goddard is a firm, charming presence within the piece – an antidote of sorts to the bitterness and bickering of other characters.

Daigle-Orians explores a range of important and volatile contemporary issues here and does so with sensitivity and a clear focus on inviting empathy with each character, despite flaws. The exploration of Dee’s reception of Luke’s boyfriend is perhaps the most well delivered, bringing light to valid points of contention impacting upon her attitudes rather than zeroing in on a simplistic view of someone with a blanket issue with same sex relationships. There’s a depth to Dee’s scenes which elevates the writing and the story beyond the primary plot points very nicely.

In The Bones looks at deep and challenging issues which are very much at the forefront of modern consciousness: mental health, love is love and the lasting impact of war on the individual. As such, the play carries considerable merit and this cast do great justice to Daigle-Orians’ troubled characters.

In The Bones is a Root & Branch production. It tours until July 6th and you can find more information via their Twitter page: @root_branchprod and Facebook page: @rootandbranchproductions