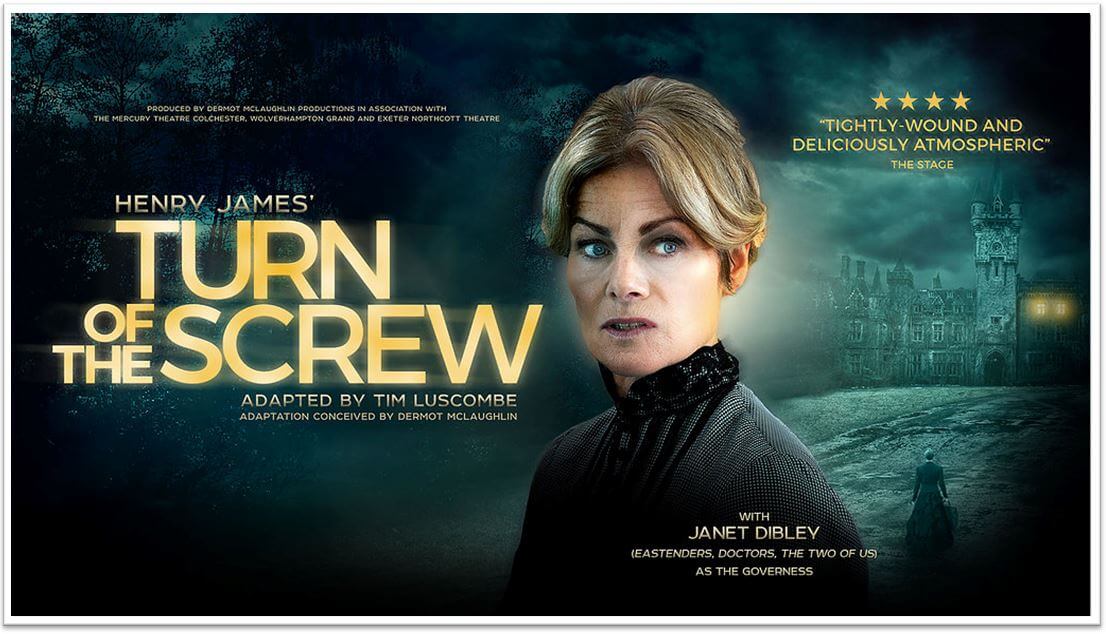 Can an 1898 psychological thriller still cause a stir? Yes, as it turns out. Henry James’ sound grasp of the most thrilling gothic traditions appear in this tale of an impressionable young Governess and her charges. Children in peril and a mind in turmoil will always inspire fascination so when this play whisks us off to a remote grand house with such young and vulnerable inhabitants, we must gather our wits and begin to unpick the puzzle surrounding two ominously spoken names: Miss Jessel and Peter Quint.

Here, Turn of the Screw has been adapted by Tim Luscombe (an adaptation conceived by Dermot McLaughlin) and Daniel Buckroyd directs with a strong sense of atmosphere and a love of pregnant pauses to bring most of the best of James’ story to the stage. In this incarnation of the production, I sense some key changes beyond the change of cast…I can’t place the specifics, but I found this much more impressive in its revised form.

For this take on James’ characters, we are given a superb cast, each impressing with their ability to hint at the possible duality and threat of their characters while encouraging us to doubt each and every one of our verdicts as they arrive. As The Governess, Janet Dibley is deeply expressive and she brings a dark clarity to the role in the disturbing final scenes. Dibley’s performance casts a gritty but generous light on the Governess, intimating that there’s much more than appears on the surface without over-exaggerating the existence of troubling depth in this loyal, dutiful woman plagued by doubts and fears.

The children, Miles and Flora, are equally well played by Amy Dunn and Elliot Burton – both of whom take on additional roles to propel the story forward. Dunn masters the art of playing a child and a grown, wronged and imperious woman by quick turns. She’s a delight as young Flora and an intimidating force as the older version. But it’s Dunn’s subtle gestures as the young Flora which elevates this production above the last I saw. Dunn is a true match for Dibley in her understanding of the power of the twitch or the glance and as a pairing, they create some excellent exchanges as both the younger and older characters.

Burton is a complex Young Miles and akin to his fellow cast members, he too manages to constantly blur receptions of the character. He keeps us questioning the motives and behaviour of this child, making his odd claims appear both entirely in line with the rebellious spirit of a young boy and yet completely repellent, especially when accompanied by some suspect acts… Maggie McCarthy delivers in her interpretation of the well-meaning but directionless  Mrs Grose by honing in on her simplicity – she creates a parallel between us and Grose as individuals capable of believing anything under the circumstances but  as quick to abandon certainty with any one theory as swiftly as we initially accepted it.

This is a brooding production of dim lighting, smoke and shows. It’s an approach perfectly complimented by Sara Perks’ brilliant designs featuring combinations of the prim and orderly with the fractured and chaotic. David W Kidd’s foreboding lighting is another central source of the gothic foundations of the piece and John Chambers’ Sound Design offers all the intense auditory trappings of a story like this, though as I thought when I saw the initial cast and production, the reliance on jump scares via the sound designs is an easy tactic which undermines the sophistication of James’ tale. The multi-roling of Miles/Flora and Jessel/Quint has improved slightly in the hands of new actors but the dynamic remains problematic even if it is perhaps not so markedly so.

More than anything else, it’s the performances of this beautifully cast ensemble which now take this latest version of the production to new heights. A thoroughly enjoyable play – catch it if you can.

Turn of the Screw is a Dermot McLaughlin Production and plays at York Theatre Royal until June 1st 2019. You can find tickets here.