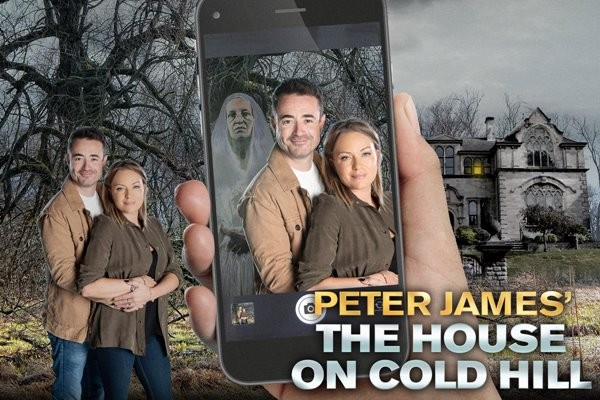 Peter James’ spooky novel The House on Cold Hill takes to the stage in an adaptation by Shaun McKenna. It features a strong cast and seeks to scare the masses with a hyper-modern all round approach.

It’s most definitely a tough gig to launch a new, modern spooky story but even more difficult is the mighty challenge of telling a ghost story which heavily relies on modern gadgets for scares. This production approaches those challenges with confidence and ambition but doesn’t find success in all areas.

All the basics are here. In fact, some of the elements feel more than a tad familiar as is the case with many ghost stories – they are after all variations on a theme. We have an old house with mystery attached and a young family just moving in. The locals have tales to tell. Odd things occur and the family are left flailing for answers as a series of visions take hold and a powerful force commandeers the building itself along with the home electronics. It’s the uneven success of the modern emphasis which primarily creates obstacles.

It’s great to see a production which manages to hold off on the scares to build characters before the wooing and booing starts. It’s a very credible family dynamic between loved up parents Ollie (Joe McFadden), Caro (Rita Simons) and their daughter Jade (Persephone Swales-Dawson). The three give the early scenes a natural and convincing bustle of the family just moving in and it’s easy to get on board and root for their safe delivery from the wayward house. I actually find myself wanting to see them in a drama or sitcom away from the unfulfilled promise of chills and scares. Yes, a very nice, relatable family.

The script does well to present daily life but lets the youth of the production down with jarring ‘teen speak’ which is already outdated despite this being a modern story. While Swales-Dawson’s performance is convincing, the same can’t be said of her teen clichè lines. McFadden is the likeable hip young dad and Simons masters the young hip mum trope without overdoing it. It’s Simons who exudes the greatest stage presence and carries the production overall here.

With the help of oddball tech geek Chris (Charlie Clements), builder (Phil Leon Stewart), Father Fortinbras (Pádraig Lynch) and local resident ghost whisperer Annie (Tricia Deighton), this charming young family introduce us to the mystery and the malice of the Grey Lady of the House on Cold Hill…who has a knack of getting her own way.

In terms of the scare-factor, The House on Cold Hill is pretty tame. While the family dynamic is very well played, Director Ian Talbot struggles to marry the performances with a script which increasingly descends into a maze of clichès in the second act. The cast are great and the bare bones of the plot are certainly the stuff of great ghost stories but in its eagerness to appeal to modern audiences with modern spooks, the show falls short on delivering the promise of the source material.

The House on Cold Hill is produced by Peter James. It plays at Leeds Grand Theatre and Opera House until May 4th 2019 and you can find tickets here.