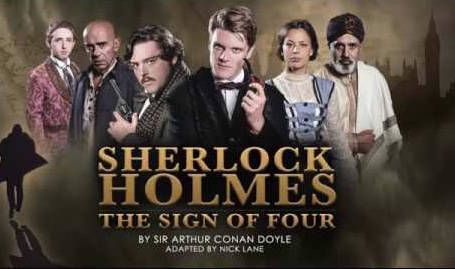 Blackeyed Theatre continue their journey through the vault of great literary classics with this latest production. Like Frankenstein and Jekyll and Hyde before it, this production of The Sign of Four handles its material with style.

It’s another mystery for Sherlock Holmes and Co: a lady requires assistance in tracking down the source of pearls mysteriously delivered to her each year. There’s a missing father, treasure, trickery and murder in the mix – not to mention a boat-based chase – it’s all very intriguing if you’re a fan of this genre. Nothing is too challenging for Holmes though, and with Watson in tow, he sets about calculating theories in pursuit of answers.

Nick Lane adapts Sir Arthur Conan Doyle’s Sherlock Holmes story well, staying true to the original almost entirely, with the addition of a spotted dog running joke and some inevitable trimming down. That said, the production could do with a few more of the peripheral scenes being chopped to avoid slipping into that sense of each act being just a scene or so overlong.

Lane also directs, and does so with stylish transitional blocking and plenty of minor movement to save the production from falling into static territory. Music is a central feature and another strong source of style for the production as actors seamlessly move from playing a scene to donning an instrument to underscore the next. It’s a device which has become very popular and this production uses it wisely to define the shifting tones necessary to tell a Holmes tale.

It’s another strong cast from Blackeyed Theatre too, with Luke Barton taking on the coveted role of Holmes and Joseph Derrington the sidekick Dr John Watson. The pair make a great duo which, let’s face it, is half the battle won if you’re staging a story surrounding one of literature’s best known partners in crime-solving. The two bounce off one another in a brotherly fashion, with Barton’s Holmes never missing an opportunity for a dig and Derrington’s Watson likewise never failing to fall for the foolery.

Barton strikes a perfect balance between intensity and playfulness, allowing us to find a man decidedly detached and logical very likeable. Derrington approaches Watson in a similar manner, honing in on his endearing bumbling and easily rattled nature as much as his comic fawning over the resident pretty lady.

Stephanie Rutherford takes this pretty lady role as Mary Morstan. Her performance marks a distinct departure from the source material in that her Morstan seems far more assured than Conan Doyle’s and this revision doesn’t always feel apt. Rutherford also takes a great turn as a mother of 14 and impresses as a versatile musician, playing a number of instruments throughout.

Christopher Glover gives a variety of distinct performances, including the principled and loyal servant and comic rival cop. Ru Hamilton shines here in each of his roles but particularly as the eccentric hypochondriac Thaddeus Sholto. Zachary Lee also  showcases some great multi-roling, taking on the mysterious character Jonathan Small as well as the would-be brute McMurdo and the tragic Captain Morstan.

Victoria Spearing’s set is initially a little puzzling but soon takes shape as building blocks for scenes of Victorian London, its docks and its outhouses, all crafted from makeshift structures. There remain a few puzzling elements, but it’s certainly a versatile and well conceived set when it comes to meeting the challenge of bringing the sprawling streets of London to the stage in a minimalist approach. Conjuring the London of this era is also helped along significantly by Naomi Gibbs’ period costume designs and Claire Childs’ muted, brooding lighting.

This production stages The Sign of Four with style, pace and strong performances. It did need a more ruthless eye in the editing process but nonetheless, Blackeyed Theatre once more deliver a quality period drama which pays homage to its source material and beloved characters. I look forward to seeing the next creation.

One thought on “The Sign of Four: A Stylish Homage to a Literary Great”