This production, with its finger on the pulse of our times, is a revival of George Furth and Stephen Sondheim’s musical comedy. In it we follow the singleton Bobbie whose friends are wrapped up in relationships of various kinds and as she celebrates her 35th Birthday, the weight of her situation as the female bachelor hits home. With the ticking of the clock signalling Bobbie’s need to propel herself forward, we are given a whirlwind of glimpses into love and marriage through Bobbie’s encounters with friends. 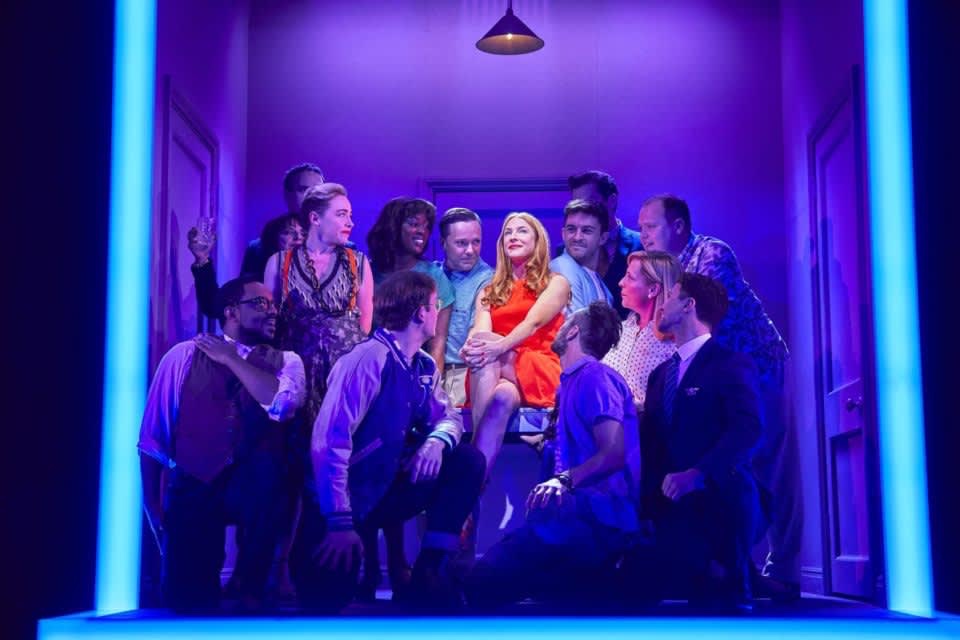 Originally a product of 1970s trends and sensitivities, Elliott and Harper’s revamp modernises in the best of ways, switching in a gay couple and switching gender roles along with some redistribution and reversal of lines between male and female characters just to even out the playing field. Bobbie is presumably a career woman, but the production keeps it simple and looks at her personal life rather than tackling a fuller picture. Revisions are with the blessing of Sondheim who has provided rewritten lyrics, so if Sondheim is invested in the merits of this production enough to revise his original work, we should all most definitely be sitting up and paying attention.

We already know that Director Marianne Elliott is an exceptional creative and like Curious Incident and War Horse before it, this production is in a league of its own when it comes to stylish and sophisticated storytelling with an emotional undercurrent and a lively coating of intelligent comedy. There’s cutting realism within the narrative but the production itself flies between wonderfully absurd fantasy sequences to cracking domestic comedy to glorious nods to Broadway and the best of big musical showstoppers.

And as if having Marianne Elliott at the helm with music from the genius of Stephen Sondheim wasn’t enough, the show features a thoroughly superb multi-talented cast. Seriously, it’s a knockout ensemble if ever there was one. Elliott keeps them moving en masse throughout, taking momentary roles to give additional artistry to the foregrounded action – it’s a constantly moving and evolving production which is utterly thrilling to watch. 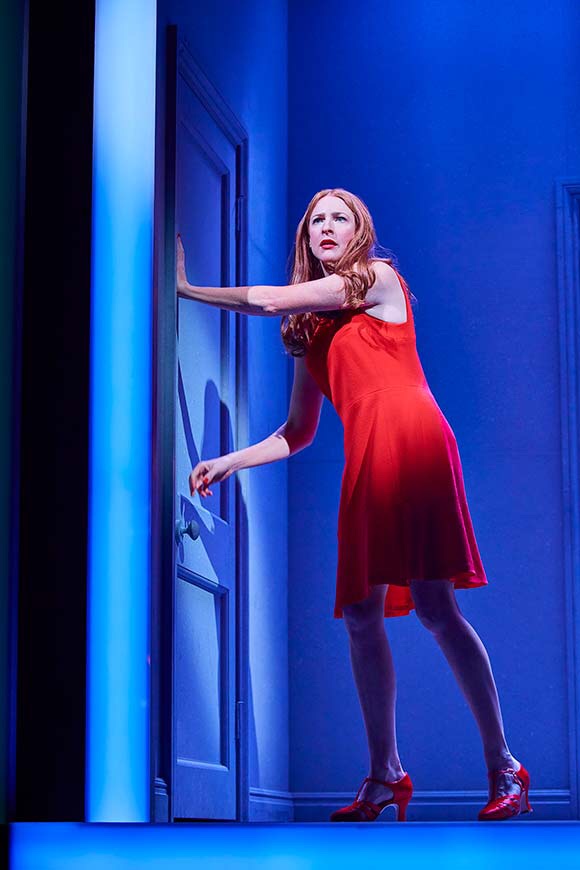 To comment on individual performances is to find yourself in the middle of one of theatre’s greatest gifts: a cast so uniformly superb that the review can be nothing other than a roll call of excellence. So here it is:

Rosalie Craig is the perfect lead as Bobbie, capturing that particular brand of charm which is in part infectiously giggly and endearing but also comically disillusioned. Company finds real value in Craig as both an accessible and recognisably contemporary representative for modern women, but also as a stellar vocal lead. Marry Me a Little is given incredible depth while the showstopper Being Alive is a resounding highlight declaring Craig to be every bit the sensational lead.

Patti LuPone and Ben Lewis are the most mature couple in Bobbie’s life as Joanne and Larry. Theirs is a marriage built on pacification and deep rooted trust, but on the surface, they are a divinely comic pairing; Joanne as the infinitely unimpressed Dame type with Larry as something resembling an adoring new puppy, but with a class and a dignity which comes from a stable life with money.

LuPone in particular brightens the wattage of this production considerably as Joanne; a woman with no illusions, few airs and an effortless gravitas. She’s equipped with a scathing eye, a purse full of reality checks and has a thrilling selection of witty one liners delivered with a deadpan forcefulness worth its weight in gold – and which gifts the production an unstoppable magnetic force. And the voice. LuPone is a fiercely talented vocal powerhouse who very nearly stops the show with her rendition of Ladies Who Lunch in the inspired nightclub sequence – one of a number of performances in this production to make us all wish live theatre had a rewind button. 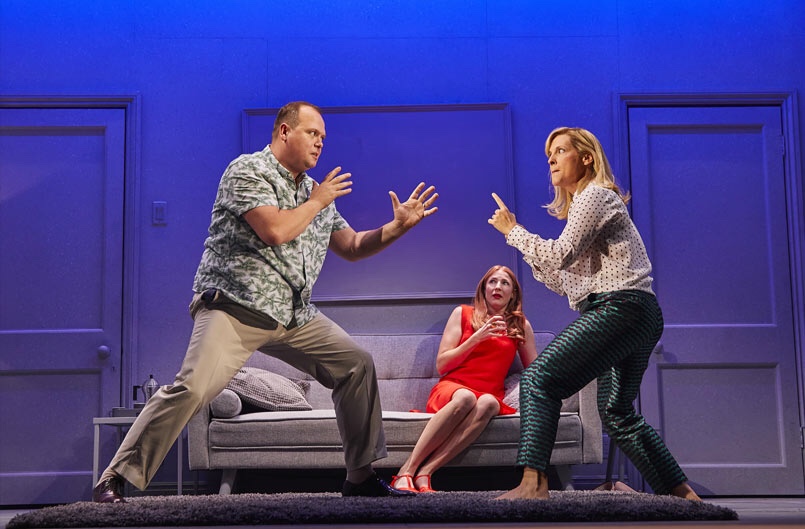 Mel Giedroyc and Gavin Spokes provide one of the funniest covertly competitive couples ever realised on a stage as the hilarious Sarah and Harry. Their passive-aggressive visions of love are playful enough to be endearing and sharp enough to keep the laughs coming.

Jonathan Bailey gives a stunning performance as Jamie. His rendition of Not Getting Married Today and the entire ‘kitchen sequence’ is a diamond-clad stand-out and Bailey’s turbo-charged performance throughout is the most hilarious thing that I’ve seen on a stage in a good long while. Playing the calm to Jamie’s storm is Alex Gaumond as the warm and gentle Paul. Together, they create a perfect intertwining of raucous comedy with a stark emotive kill switch, evoking that Hitchcock move of the sobering moments  feeling much more powerful when supplanting an opposing emotion.

All done? Not yet. Richard Henders and Jennifer Saayeng offer us David and Jenny. Like every other pairing in Company, Henders and Saayeng produce some brilliant comedy but their relationship leans more towards the disappointments of marriage and the traditional trajectory of ‘successful lives’ with one of Saayeng’s parting moments providing a subtle but impactful glimpse of the precarious position of single women surrounded by friends in couples.

Daisy Maywood and Ashley Campbell’s Susan and Peter are adorable and a tiny bit ‘alternative’, giving the story a healthy injection of the mad realities of the world we live in. They remind us that couples come in all shapes and sizes, as do marriages and the variety of other relationship paradigms in operation – everyone surrounding Bobbie has taken a different route in the realm of marriage, begging big questions about the expectations of co-existence and marital dependency.

Bobbie also has a trio of love interests who heap even more comedy fuel onto an already blazing fire. There’s the devastatingly self-certified WOKE hipster PJ, played by the brilliant George Blagden with all the earnest opaqueness of a real egotist. Then there’s the sweet but ill-fated Theo, played by Matthew Seadon-Young, whose sincerity is a great source of melancholic comedy while Richard Fleeshman is just superb as Andy, the sensitive, boyish flight attendant whose brain is as rock-solid and unmalleable as his paraded abs. Fleeshman’s comic timing is outstanding and the comedy created between Fleeshman and Craig is a thing of awkward genius thanks to wonderful direction from Elliott.

When I say the production is superlative in every sense, I mean it – writing, direction, designs, music, performances – all work seamlessly to produce something exceptional. Liam Steel’s choreography is incredibly stylish, as is Elliott’s direction, with bold choices of striking visuals created through impressive sharpness and fluidity.

Bunny Christie’s set designs are brilliant creations, equally as striking as the choreography performed within the shape-shifting spaces which seem to be ever in rotation. Neil Austin’s lighting provides the visual gold leaf to the designs, capturing the shifting nature of the story in the most expressive tones.

Sondheim’s gorgeous music is the heart of Company’s narrative, but also carries in it some of the very best comedy. Songs span the emotional spectrum of a woman walking the tightrope of being 35 and not yet following the norm and the music is brought fiercely, playfully and vibrantly to life by Musical Supervisor and Conductor Joel Fram.

Like others, I have no experience of George Furth’s Book of Company pre-dating this one. I’ve known many of the Sondheim numbers from Company through various incarnations over the years, but the songs were known to me only in the abstract, not attached to a specific narrative. Sondheim’s work is always brilliant in isolation, but of course, seeing the work embedded within a narrative gives them so much more shine. Also like others, I find it hard to envision Company with a male lead packing quite so much of a gut punch as this production – when told through a female lens rather than the classic male bachelor type, it is a timely and thoroughly gripping narrative.

In short, this production is an absolute gem. I haven’t enthused this much about a show in a good long while; I grinned and giggled my way through it in a bubble of pure theatre-loving joy. It is exquisite escapism from everything outside the Gielgud Theatre walls and it takes the best of everything about musical theatre, comedy and sophisticated staging and puts them on a stage alongside one of the very best ensemble of actors a person could hope to find in the West End. With Company, Elliott et al have achieved something very special within the current musical theatre landscape and you’d be an absolute FOOL to to miss it!

Company is an Elliott and Harper production. It runs at the Gielgud Theatre, London, until 30th March 2019 – get your tickets here.