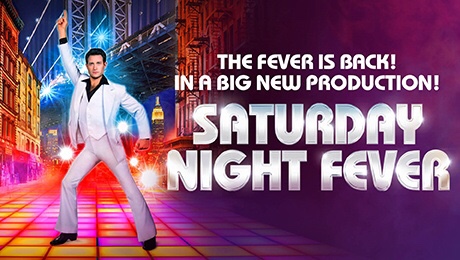 Saturday Night Fever arrives on stages once more, decades after the hit Paramount/RSO film delighted audiences. Robert Stigwood adapts Nick Cohn’s story for the stage in collaboration with Bill Oakes and the musical does a good job of delivering some 70s escapism via the ball of angst that is Tony Manero. That said, the production is undeniably uneven, with the first act feeling distinctly underwhelming and lacking in purpose and at times stage presence before the second act arrives to save the day with some credible substance and some fire.

Set in 1970s Brooklyn against the unique sounds of the Bee Gees, director Bill Kenwright brings another heavyweight musical to the touring stage. Tony (Richard Winsor) is fed up. His dad (Phillip Aiden) is a rotten apple who winds him up at every family meal, often with a beer or three in his system. He lives in the shadow of his brother, Frank Junior (Marios Nicolaides) who is a respectable priest – though in truth, he too is suffering a crisis of faith, just a different kind. Sister Linda (Olivia Kate Holding) and mother Flo (Melody E Jones) are the ‘nice’ ones, but they’re caught in the cross fire of misfiring testosterone surrounding them.

Tony faces further frustrations outside the home though. Clingy Annette (Anna Campkin) proves difficult to shake and although Tony feels some warmth for her, she’s quickly passed over when Stephanie Mangano (Kate Parr) arrives on the scene. Then there’s the drama external to his own life, with pal Bobbie C caught up in the classic ‘now she’s pregnant’ conundrum.

In short, his dad wants to knock a piece off his ego. His buddy wants a piece of his wisdom. Annette wants all of him and Stephanie wants none. What’s a poor guy to do but let off steam through the medium of funky dancing?

So while Tony is stuck in dull store work by day and arguing with dad in the evening, he’s also lighting up the dance floor by night. It’s only at the 2001 Odyssey Club that this melancholy boy and his pals Bobbie C (Raphael Pace), Joey (Michael Cortez), Double-J (Jared Thompson) and Gus (Owen Broughton) let go of their worries. When an impressive competition is launched by the club, Tony finds drive in dancing beyond stress relief. 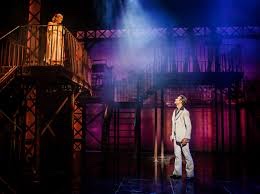 The central narrative is engaging enough, though it isn’t quite gripping and it’s worth mentioning that as with most shows set in the 70s and prior, women and gay men get some off-hand sour treatment which I guess is at best contextually sound but at worst a little awkward to watch in our current ‘woke’ climate.

It’s a notably large cast and choreographer Bill Deamer puts them all to work with classic 70s disco moves all performed under disco lights with glitter balls (Lighting Design by Nick Richings) to conjure the scenes within that disillusioned Brooklyn neighbourhood and to offer up some brilliantly vibrant visuals. Set is a movable feast and Gary McCann’s designs allow for swift segues. 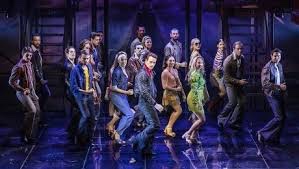 Now, there’s not much weight to any of the hostile scenes in the first act – the clashes around the dinner table feel rushed and tame, but the second half has this production finding its dramatic feet and what was lacking early on becomes really quite moving. The scene with Tony talking to his sleeping mother and his heart to heart with his brother feel much more fleshed out and credible. The final scenes with Bobbie C are also nicely done, as is the defiantly cathartic dance sequence which follows.

I do have to add that I found myself questioning the decision to relegate The Bee Gees (Edward Handoll, Alastair Hill and Matt Faull) to a platform way back on stage close to the rafters for the duration. The music is the heart of the piece so I can’t help but wish they’d been given a chance to come down and take a star turn for just one number…even if just for the finale, bring the boys down from that ledge! 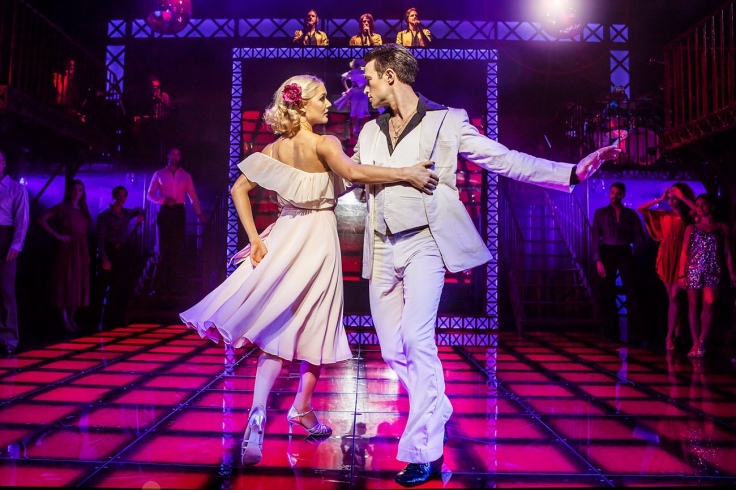 Strengths in this production include Winsor’s painstakingly maintained ‘cool kid with unshakeable mettle’ persona and ‘I take myself painfully seriously’ facial expressions. Kate Parr delivers both as dancer and singer, with her rendition of What Kind of Fool being a particular highlight in this production. There’s a great, energised fiery number from Rhianne Alleyne and Javier Cid during the competition scenes and Aimee Moore steals the dancer’s spotlight, giving a uniformly excellent precision performance throughout.

The best thing of all about this show is without a doubt the music. Having the deep bass of Night Fever play out loud and proud is really quite surprisingly thrilling. There are songs we all know and love which are impossible not to appreciate live and this show offers a fair few: Stayin’ Alive, More Than a Woman, Boogie Shoes and the real classic, Disco Inferno. The show also uses some of the smoother sounds of the Bee Gees to support more dramatic plot points, with Words, What kind of Fool and How Deep is Your Love used very effectively here. 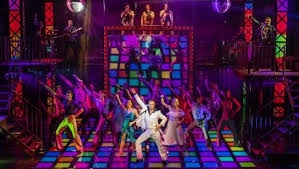 Saturday Night Fever is a throwback to 70s funk that should keep the youth of the 70s in the audience very happy indeed. There’s perhaps less shining for younger generations who like the music but not enough for the underwhelming elements of the production to be forgotten.