I’m a little late to the party with this one, but here’s my tuppence worth, for what it’s worth: Mark Ravenhill’s new play is a dark and intriguing affair laced with dry humour and a scathing commentary on our culture of accountability.

As a teacher retires after a long career in the profession, his past comes to light to surprise his students. Modern youths cannot abide the knowledge that this respected teacher has in the past bloodied and caned their would-be peers, and they surround the house in protest and rage. Daughter Anna arrives to attempt to offer advice, with surprising consequences. 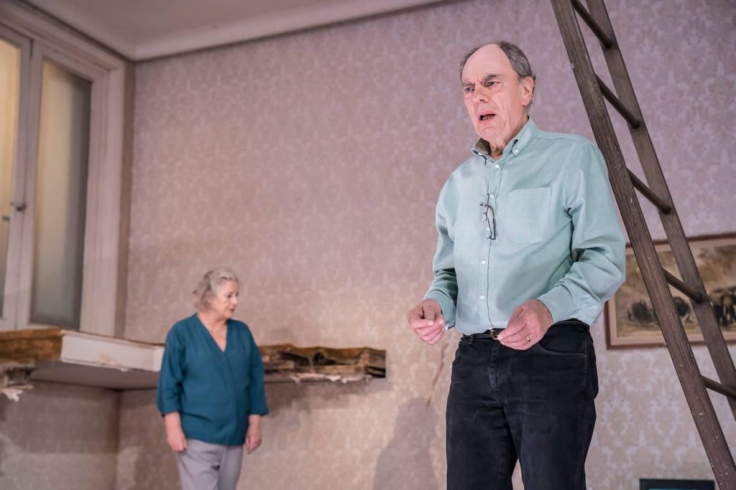 The production risks glaring minimalism and it pays off. There’s little complexity in movement and Designer Chloe Lamford offers nothing more than a comfortless, bare living room with sparse furniture and peeling walls. A decaying almost-formed staircase provides an unseen level and there’s a recurring removal to an attic space. Lighting from Natasha Chivers works in sync with Sound by David McSeveney for some stark scene segues but the production lies at the feet of the actors.

It’s a brazenly bare, intensely static play which despite very little visual appeal, grips its audience in what is essentially a lengthy set of interrogations within a dysfunctional family unit.

How does The Cane manage to hold us with so little going on? The performances are of course the primary reason. For just over an hour, a trio of seasoned actors give a masterclass in the unsaid.

Alun Armstrong’s Edward is stoic and entitled and deeply conflicted. When challenged about his past and his role as the local school’s Cane Man in his position of Deputy Head, he’s defiantly dignified. But the most winning element of this play is its ever shifting nature. First impressions don’t last. Dynamics shift on the turn of a cutting phrase or an instinctive action. 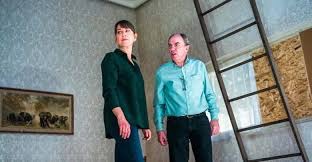 We get the distinct impression that Edward doesn’t quite tell us the truth. The question is, is his generation of male entitled to that privacy? Was the fact that he was just doing his job then enough to deflect criticism in the here and now? Caning was okay then. It was wide-spread and an accepted fate of the naughty, tardy or sleepy boy. Should he show remorse in this new age of benign detentions and tellings off?

We live in a world of outing of truths and baying for attrition, so the parallels are glaring and probing. One thing is certain: the crowds of youths targeting this ‘popular teacher’ are certainly after something like grovelling from this legally protected bully of children. 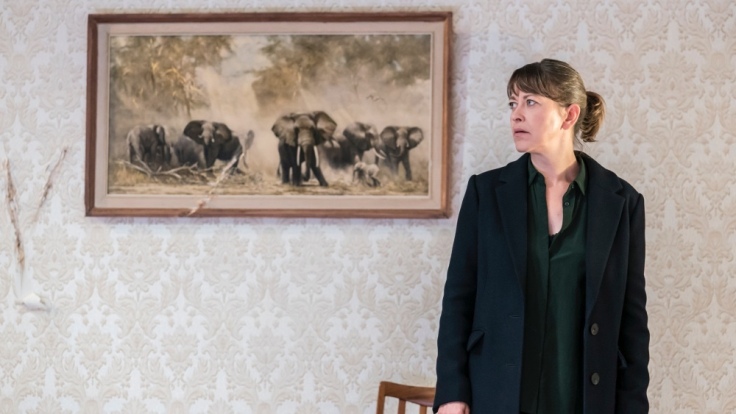 Maggie Steed’s Maureen follows the same trajectory, but in reverse. Steed presents a cold, dismissive and even callous woman at first, but we slowly begin to discern a vulnerability below the surface. She’s a woman and wife of her time, just as her husband is a man of his time. She goes along. She appeases. She rejects what he rejects and vehemently defends every action he has taken.

Somewhere though, Maureen’s autonomy is stashed away and with a little digging, parts of it start to creep into the light and therein lies the thrilling game of cat and mouse led by daughter Anna.

Anna is the only child of the couple. She’s a disappointment and a regret according to her parents in flashes of rage and indignation. Presented as a tearaway without cause by her parents, Nicola Walker depicts her as a survivor of a cold home rather than a victim.

Walker’s performance is thrilling and dark. From the beginning there’s a sense of edginess to her. She’s back in a childhood home trying to communicate with people who want her significantly farther away than this living room. She diverts criticisms and stands her ground in a remarkably controlled manner considering some of the exchanges and that’s gripping to watch all by itself.

It’s Anna’s role in schools which puts her in opposition with her retiring teacher father and they both feel it. She stands for contemporary education standards and the best practice. He maintains that he merely did what was expected and necessary.

Anna’s actions don’t exactly escalate, because the whole play is so tense and muted that her ‘deviant’ behaviour is performed with the same subtlety as the veiled frustration in her words.

Ravenhill has skilfully layered darkness and light here. We are coaxed into laughing frequently at surprising exclamations. The humour is bred of anger and a sense of detachment towards surroundings. We don’t expect to hear some of the brutality from the characters we’re watching so when one of them takes aim at another and fires a poisoned dart with no forewarning, it either inspires mouths agape or a surprised giggle – or both. It’s a brilliantly charged script and nothing evidences this more than the fact that not a rustle was heard from this captivated audience…

Does the daughter see an opportunity to mend relations with her parents by saving her father from himself, by bringing him out of his concrete fort of stubbornness? Does she hope helping her parents in this PR nightmare will allow her to build a new relationship with the mother who snubbed her primarily to please her husband? Or is there something else on her mind?

The Cane reveals most, but not all. We are left with a fair few questions to mull over, and Ravenhill’s writing is perfectly pitched to send us back out into our modern world of culpability and resignations in the face of pasts brought to the fore to ponder our robust ethics anew. Direction from Vicky Featherstone is excellent. The cast are nuanced and superb. The script is skilled and gripping. I’d say go and see it but I caught this on the last day of its run so…here’s to the hope of another run somewhere in the future!