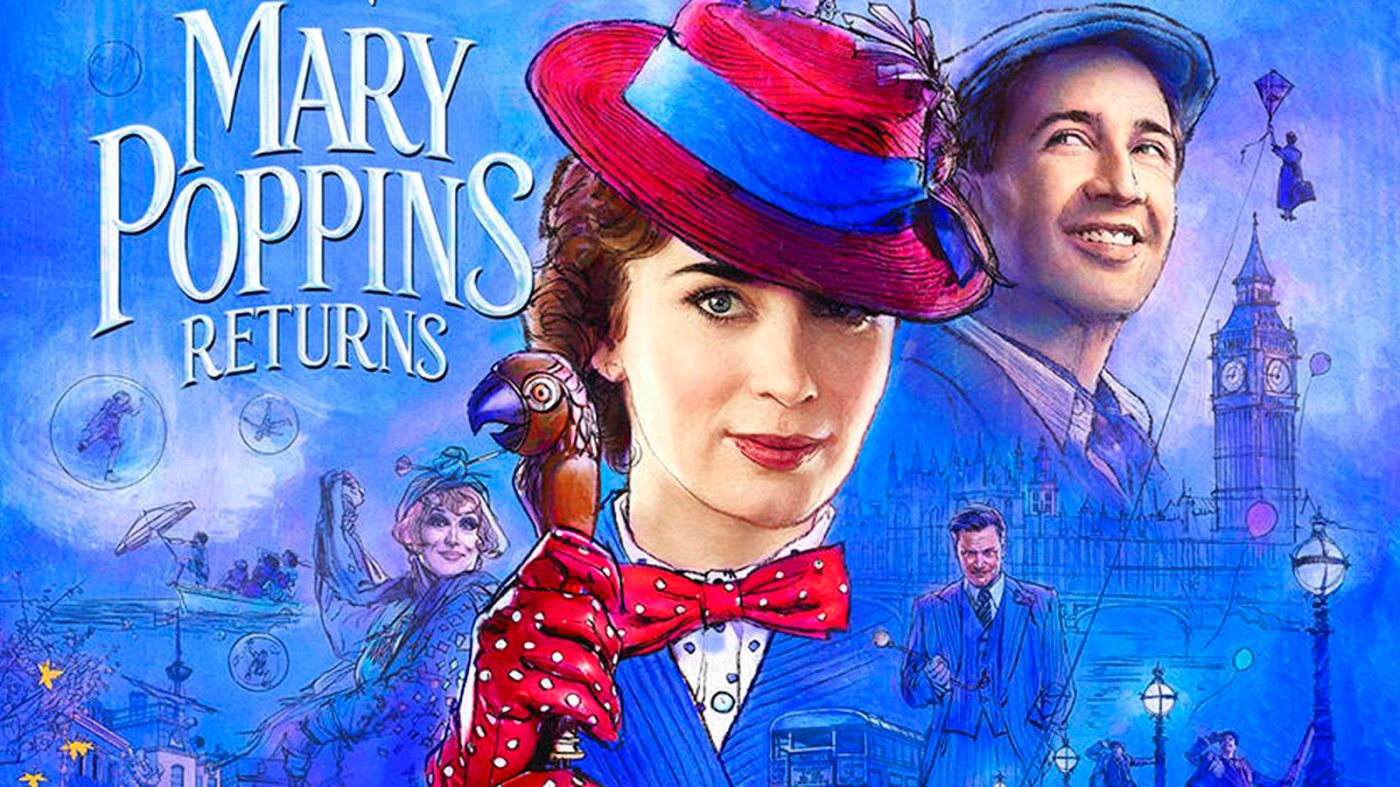 The much awaited return of Mary Poppins has landed.

Mary Poppins Returns takes a beloved old classic and gives it some modern aesthetics and new stomping grounds. It’s not so much about carrying on from or matching up to the original, it’s about finding a way to bring great characters back to the big screen with modern upgrades to boot. It’s still set in yesteryear though, with the now thirty ish year old Banks children looking after the the children of the now-widower Michael. With a recent bereavement looming large, new conflict arises as the bank are demanding payment; the fractured Banks family unit must find some rather vital paperwork or face losing the house. With the man of the house spiralling and growing impatient with his little darlings, and with his sister unable to help him out of his anxiety, it’s down to Mary Poppins to return to save the day…and the happiness of this family.

Emily Blunt is a well chosen and interesting new Poppins. Blunt has proven herself to be incredibly versatile in recent years and adding an iconic role like this to her catalogue is great to see, but there’s something a little odd about this Mary Poppins. It’s not the performance itself, which takes the best of Julie Andrews’ characterisation and adds just a slight sprinkling of fresh nuance. It’s not the costume, which does well to keep Poppins recognisable but newly clothed. It’s the voice. Not your recognisable RP and also not quite Blunt’s usual sound – it’s impressively maintained, but I did find it a little distracting and I can’t say I was a fan, despite the otherwise perfectly charming performance. What Blunt does do beautifully is the array of pointed Poppins looks. One look holds so very much in it, and Blunt nails those expressions captured by Andrews as if she herself originated them.

Ben Whishaw is utterly wonderful in this movie. As the grown up Michael Banks, a man with the world on his shoulders and all knowledge if his magical childhood long gone, he’s just struggling to keep it together for his motherless children while keeping the wolves from the bank at bay. Whishaw sensitively captures the conflict of this character; a loving, devoted father who ends up taking on the worst of his own father when his patience and strength are pushed to the limit. Best of all, Whishaw’s performance is incredibly feeling without slipping into that heavy brand of musical sentimentality – for me, His is the best performance of the movie.

The child actors are fantastic. In Pixie Davies’ performance, little Anabel is very much the mini mother. She’s all maturity and care when it comes to her siblings and it’s adorable to watch. In much the same vein, Nathanael Saleh’s John is a mini father type. He’s the man of the era in the making and alongside Anabel, John is responsible for chasing after the bounding ball of energy that is George, played to maximum cuteness by the cute-as-a-button Joel Dawson.

Interestingly, there are pointed equivalents rather than attempts to recreate here which saves us the anxiety of trying to match up characters from the first film with older versions. Lin Manuel Miranda plays Poppins’ go-to guy Jack, a lamplighter with all the stylings of Dick Van Dyke’s chimney sweep but crafted to bring the same charm to the story, not necessarily the same exact cockney geezer. Manuel Miranda gives a winning big kid performance, making all ages swoon for his fun-loving ways, infectious optimism and can-do attitude.

Emily Mortimer’s take on the grown-up Jane Banks is a homely, gentle soul who is permanently breathless and completely endearing. Soft-spoken and infinitely optimistic, she’s the perfect would-be antidote to her brother’s haze of frustration and heartbreak if it weren’t for those pesky bankers. The flirtation between Jane and Jack is a lovely little detail too and Manuel Miranda and Mortimer bring the sugar-sweet fluster and innocent coy looks back to the screen- quite refreshing in the contemporary climate of saucy scenes and sexual tension depicted in most movies…

Colin Firth dons his villain hat here as Wilkins, the greedy banker seeking to steal the Banks’ house from under them. Firth plays the duality well, helped significantly by his track record of charming bachelors but he certainly plays the charm and the charmless equally well here. Caught up in Wilkins’ wicked scheming are clerks Gooding (Jeremy Swift) who seems rather on board with it all, and Frye (Kobna Holdbrook-Smith) who is an earnest and likeable take on our classic ‘in with the wrong crowd but has a good heart’ type. And then there’s poor Receptionist Miss Penny Farthing (Noma Dumezweni) who seems caught up in Wilkins’ lies without a clue as to his real nature.

Cinematography from Dion Beebe is beautifully nostalgic. It paints the story as exactly that: a story. Often mimicking the fairytale in plot, the aesthetics keep in step and much of the movie feels lovely and cosy with a real all-the-family-together haze. Production design by John Myhre conjures the era and the styles of it with a conscious eye on Costume Design from Sandy Powell which has our enervating cast popping out of monochrome, stuffy or grand settings in all manner of patterns and shades – and so, so many hats and flat caps…

Segments taking the characters into animated worlds are a great throwback to the most winning elements of the first movie, and all such scenes are full of thrill. That said, the dated nature of the animations, while in keeping with the period setting, mean that there’s not much to really dazzle and it does feel like there were opportunities missed in terms of modernisation or genuinely original moments.

Other highlights include the wonderful Julie Walters as maid Ellen. There’s more than a hint of Mrs Overall in there, but this Cockney take on Walters’ grandmother type also brings a distinctly working class, salt-of-the-earth wit and warmth along with some of Walters’ brilliant physicality. Meryl Streep briefly appears as Cousin Topsy, the Russian (?!) cousin of Mary Poppins who is all kinds of dotty and can crack out one heck of a fast-paced ditty. You’ll spot some welcome familiar favourites too as Angela Lansbury makes an appearance as the Balloon Lady in the park and Dick Van Dyke as a sprightly Mr Dawes Jr. – an unlikely but thrilling victor!

Mary Poppins Returns is of course a musical – how else would Poppins ever signpost a learning moment? Marc Shaiman’s Music is suitably jaunty and there are plenty of lively sequences to impress, though it must be noted that there’s nothing here which comes close to the rooftop sequence of the original which is surprising considering modern movie making capabilities. Songs are entertaining and perfectly accompany the narrative, though I didn’t leave humming anything which again felt a little surprising. It almost feels like the movie plays things a little too safe, and by making everything simply very pleasant and streamlined in relation to the first movie, it hasn’t quite managed to make an impressive impact all of its own.

Directed by Rob Marshall and with Screenplay David Magee (Screen story by Magee, Marshall and John DeLuca), Disney’s delayed sequel paints P.L.Travers’ character as charmingly as ever. What the film doesn’t quite manage to do however, is give the character or the story surrounding her any daringly new elements. There’s really never a dull moment though and the whole movie ticks away nicely while offering up some old-timey escapism and I’m sure little ones of those who watched the original as little ones will love it just as much.