It’s December in Harrogate and the local theatre is in full buzzing swing. An audience of Brownies, Scouts and various other cute kids’ organisations are filling rows with swathes of uniformed little ‘uns and filling the air space with giggles and chatter. It’s panto time! 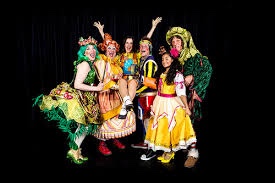 The story? Well, in the Year of the Woman, our Jack is a girl (Harriett Hare) and it’s her brother Simon (Tim Stedman) who provides all the boyish silly antics one might expect from a male Jack. Our Panto Dame in this production arrives in the form of Dame Trott (Howard Chadwick) who could give a foghorn a run for its money while simultaneously challenging drag teams to a costume stand-off. Joining Jack on her adventures is bestie Jill (Christina Harris), princess and daughter of King Bumble (George Telfer).

Now, Bumble has an evil twin brother Fleshcreep who has his sights greedily set on self-elevation by pleasing the Giant in the Sky (Naail Ishaq) by getting hold of Jack. Jack, as we all know, is forced to sell his beloved cow Buttercup (Alice Barrott at the head, anon at the rear!) and does so for BEANS, the silly child! Shenanigans and a voyage into the clouds is in order. Along the way we’re entertained by bouncy, flouncy Tigger-type Fairy of the Forest (Polly Smith) who narrates periodically to keep us up to speed.

For me, the real delights here are the puppet-types. Buttercup is brilliant. A beautiful face with endearing fluttering eyes and a surprising coy femininity – also just the right size for panto, crucial in livestock costume I feel…

As for the Giant? A wonderful addition, giving the production some great spectacle in the shape of the mean ‘old beastie’ towering over the actors against a backdrop of giant furnishings. Lovely stuff. Like Buttercup, he’s well crafted and has a great face designed to be imposing but not necessarily threatening – the music does that for him of course. Oh yes it does… 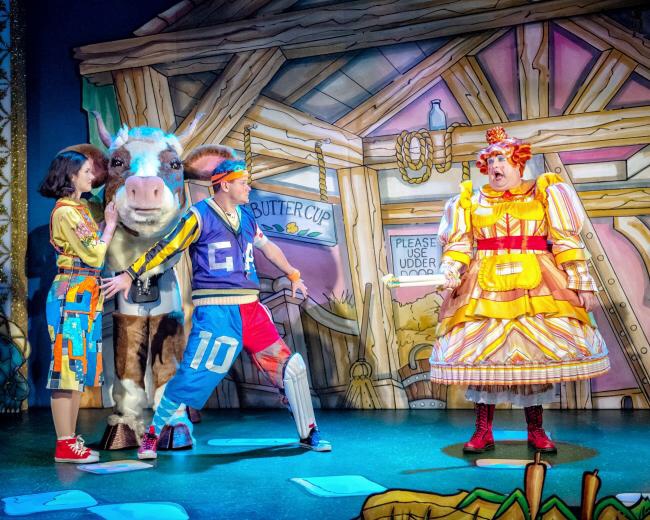 Highlights in human form appear in the unshakeable enthusiasm of Tim Stedman and Polly Smith. Stedman is all slapstick, snot and silliness while Smith is your ideal bundle of glee fairy. Smith gets a second chance to shine with her Scottish captured Cook, a character she uses as a vehicle to showcase great comic abilities and a flair for the caricature.

On the flip side, despite being a popular panto classic this particular scripting (Phil Lowe and David Brown) of Jack and the Beanstalk is a little underwhelming but is thankfully performed with high zest by a super duper enthusiastic cast. Where the script itself falls short, the cast up their game with big bold characters and plenty of gleefully silly physicality – and really, isn’t that what we’re all here for? 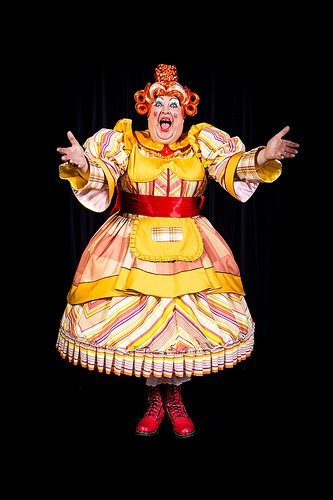 And the jokes are awful. Truly awful. But delivered with the certain knowledge that they are exactly that! The cast deliver these ‘funnies’ very much prepared for a mute response but that’s half the fun, giving them the opportunity to heckle US and jovially remind us that this is panto folks, get on board or go home. That said, the string of pun-filled one liners on offer upon various character entrances does wear thin, though I suspect only for grown ups. I could have done without the generous helpings of five floppy zingers in a row if I’m completely honest… Yes, yes, I know. Boo, hiss. I shall change my name to Ebenezer… 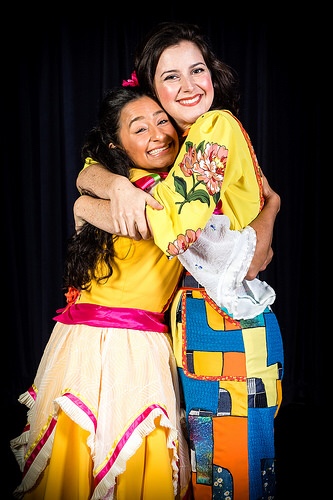 Set is another lovely highlight, with copious glitter, naturally, and plenty of colour. And the beanstalk? Very nicely conjured through a combination of lights (Alexandra Stafford), smoke and…other theatrical sorcery! Much to the delight of the gasping youngsters I add.

Sophie Zealand’s choreography has a team of young dancers (Isobelle Broadbent, Isabel Barnes, Evelyn Somers and Niamh Armstrong at this performance) delivering sequences from The Greatest Showman and dramatic numbers to give the production a nice sense of variety (also playing nicely into current trends and tastes – the little boy in the row in front burst into accompaniment before he’d even had a millisecond to debate the matter).

This panto, like all good pantos, takes pains to uphold classic traditions; Happy Birthdays, Shout-Outs, Quips about the local area and a good few very cool, very current musical offerings. From Jack and the team we get Baby Shark (well, of course, right?), the classic upbeat Walking on Sunshine and even a snippet of Adele’s Someone Like You in a rare heartfelt moment of pining in this uniformly jaunty production from Director Phil Lowe.

Harrogate Theatre’s 2018 contribution to the festive theatre scene does a lovely job of bringing panto traditions alive to thrill and to entertain at the very best time of the year. It’s good Christmassy fun for the young so scoop up your nearest and dearest little ones and take a trip to the land of giants, beanstalks and sing-alongs!

Jack and the Beanstalk plays at Harrogate Theatre until January 20th 2019 and you can find tickets here.