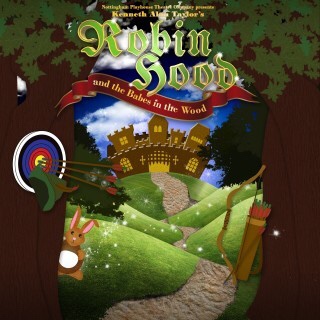 Writer and Director of Robin Hood and the Babes in the Wood, Kenneth Alan Taylor, clearly knows what panto is all about. The show is packed with fun, fantasy and plenty of cheerfully gaudy excess – full of life and colour in every sense, this is a very fine panto indeed. 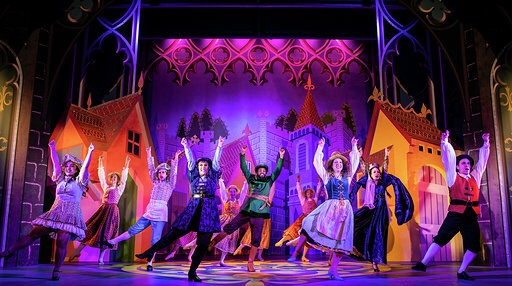 The tale is a simple one, as is the telling of it. It’s as child-friendly as can be, complete with with the mild danger of murder plots and with some classic humour pinging over the heads of the children to give the grown-ups a laugh (although there’s less of that in this production than in others). So, in brief: The horrid Sheriff Of Nottingham (the perfectly cast and very villainous Robin Kingsland) is collecting unfair high taxes from the people. 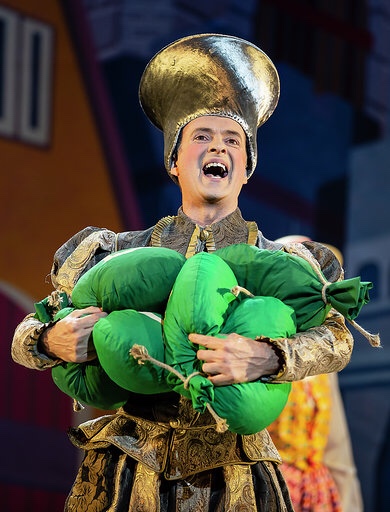 Instead of doing his own dirty work, he sends the adorably anxious and wimpy Arnold (Darren Southworth) to collect for him. Cue hero of the people Robin Hood who has the bright idea to steal the money back from the Sheriff (the rich) to give back to the people (the poor). In the mix is a sub-plot in which the Sheriff, not content to simply be a greedy guts, plans to bump off his niece and nephew (the super sweet Babes as referred to in the title) to gain their inheritance. Will Robin Hood and gang let this happen though? Ohhhhh no they won’t! 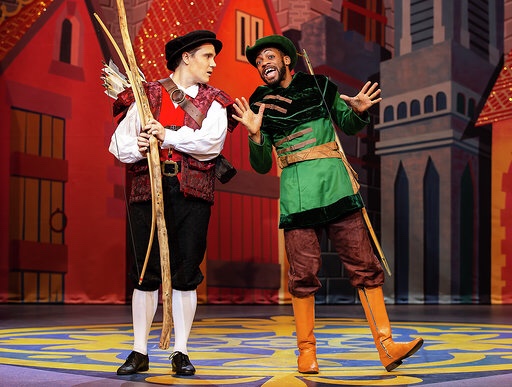 The brilliant Tim Frater takes the title role of Robin Hood and brings a lively playful energy to the role. Frater is both leader and mischief maker, getting his team on stage and off to declare themselves his Band Of Merry Men (and Women) with all the zest of patriots. His on-stage Merry Men (and Women) are made up of the sprightly duo of cooks Tina Tuck (Clarice Juliana) and Alan-a-Dale (Kinden Singh Uppal), the put-upon Will Scarlett (Adam Pettigrew) who is pig-SICK of getting the girl disguises damnit! 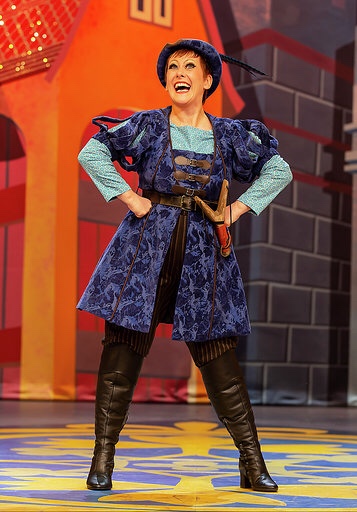 Joining them are the super eager Milly (Kelly Edwards) and the bouncy, gleeful Tilly the Tomboy, played by Rebecca Little (a firm favourite and a real seasoned pro). Maid Marian (Kelly Agredo) is an honorary and covert member of Robin’s band and as someone residing in the castle of the enemy, she’s both love interest and informer for our dear Robin. 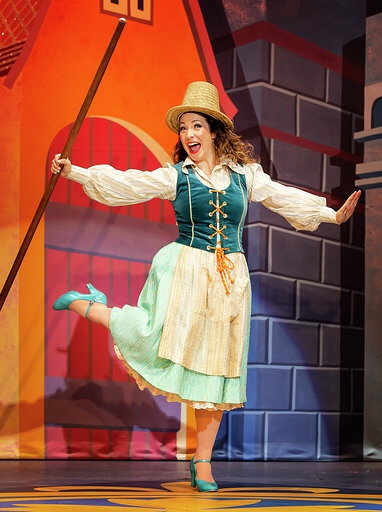 Put John Elkington centre stage to interview a string of little ones for an hour’s show while their parents squirm and I reckon you could sell out. The man is a thoroughbred entertainer; spirited, quick on his toes and thrillingly wayward. Previous years have seen him play Widow Twanky but here he appears as Nurse Nelly Noggins and my hyperbole is only minor when I say the stage gets lighter and brighter each time he steps out onto it. Nurse Nelly is a very tongue in cheek take on the moral governess trope and Elkington channels his inner Mary Poppins beautifully but never loses the self-aware sparkle of being the grand dame staple and he makes us hope against hope that the man in the dress never disappears from the panto scene. 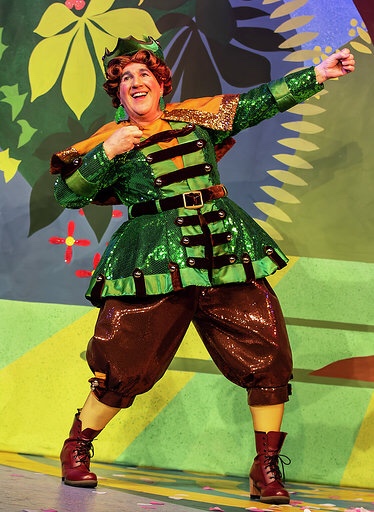 Half of the appeal of any panto falls to the design. Tim Meacock does a superb job with both set and costume but particularly shines in costume designs. Set is traditional: 2D, cartoonish and made up of one part primary colours, one part buckets of glitter and two parts in-your-face. The 2D nature makes way for some nice wisecracks and plays to grown up sensibilities with pointed acknowledgement of its uselessness. But for wee ones taking their first trip to the theatre, this is surely a thrilling thing to greet young eyes as the curtain rises: a fairytale book live on stage! 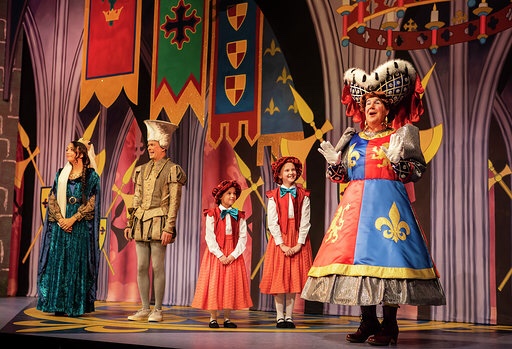 And the costumes. OH THE COSTUMES! Beautifully made with lots of detail to capture our imaginations and take us willingly back in time. So good are the costumes that the programme includes an illustration of each actor’s garb alongside their bio – something I think all shows should do frankly. There’s not a single dud to detract from the overall quality, but no costumes please the extravagant panto style more than those donned with such a twinkle in the eye by Elkington. The grand dame figure remains the one with the best kit and every get up provides opportunity for a laugh… 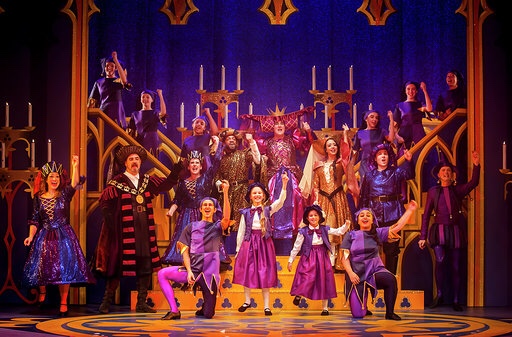 Adele Parry gifts the show some lively ensemble choreography and the cast keep the pace very nicely (bar the rather uneasy first number which perhaps needs sharpening up as the big opener). Parry certainly makes the dance all about fun fun fun. Musical director John Morton has his work cut out here as the show inserts copious classic popular songs at will, randomly inserting a Queen Melody, a Hamilton ditty and the Shark Song for no reasons beyond the fact that they can, so they do and because songs are a sure fire way to raise smiles and get some nice audience participation in. 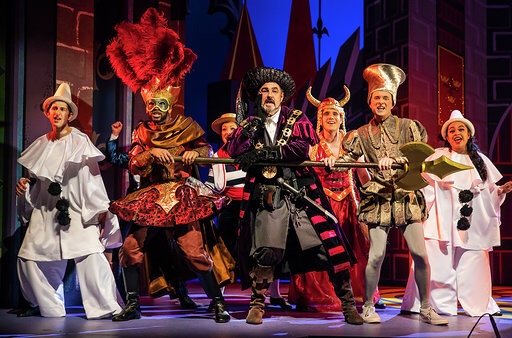 Nottingham Playhouse also proudly preserve every tradition going – shoutouts to those in the audience, the birthday list, whole theatre sing-alongs, witty one liners about the local area and all rounded off with getting some little ones up on the stage for a witty interview. The show has the house and several kitchen sinks in it, even drawing inspiration from current figures in prominent TV commercials to raise a quick laugh. It’s bonkers and it’s thoroughly random, but it works. Put it this way – with everything crammed in and the show packed to the gunnels with all sorts of entertainment, there’s never a dull moment! 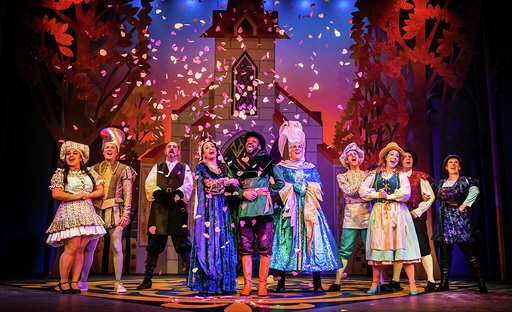 This is a wonderful panto. It blends the traditional with the modern throughout, taking care to make mention of all the big trends this year to give the kids a real kick. In true panto style, it flogs its running jokes until only the skeleton of the original remains and this can and does go both ways – sometimes it’s hilarious as it builds and builds and other times it feels a little too drawn out but hey, anything goes in panto kids. Casting is spot on and performances are perky without ever slipping into the overdone – and yes, even panto can most definitely be overdone! I think this show will be a real fun-filled treat for the babes of Nottingham and their accompanying family and friends.

Robin Hood and the Babes in the Wood is presented by the Nottingham Playhouse Theatre Company and if you don’t know now, you surely will never forget it by the end of the show: this panto is sponsored by Nottingham City Transport. The show plays at Nottingham Playhouse until January 16th 2019 and you can find tickets here.

One thought on “Review: Robin Hood & The Babes in the Wood at Nottingham Playhouse”