Adapting something so extraordinarily brilliant as this Charles Dickens masterpiece is surely a tough gig. A Christmas Carol is so rich with insight and detail that to do it justice in a stage adaptation is to ask an awful lot of the adaptor. Deborah McAndrew rises to the challenge though, and offers all the best moments of the original while being mindful of modern sensibilities and the various ways in which this story has evolved over the years.

Thanks to the Muppets, Dickens’ story has become a Christmastime staple. Yet their rendition makes Scrooge far more of a comic character than Dickens ever conjured. The music, especially the famed Marley and Marley number, gives the story a bounciness quite removed from many of the more sinister, sombre elements of this tale of sin and redemption (which is of course at heart a ghost story). 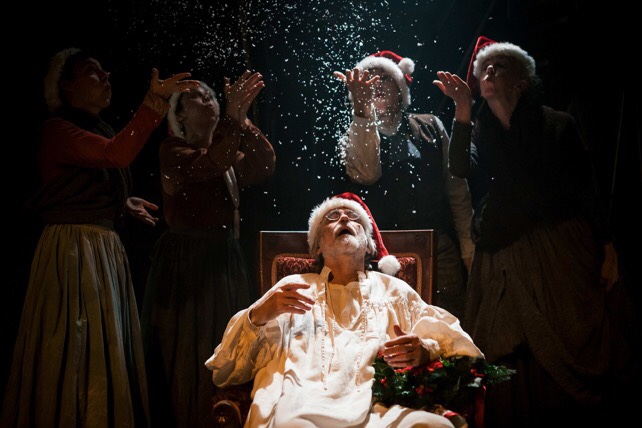 McAndrew’s adaptation seems to marry the delights of jollier renditions with the gravity of the original very nicely. Scrooge’s terrible character is comically cantankerous rather than hatefully so. Music carries a clever duality as songs shift between sinister and jolly (it is also a lively central highlight throughout). The opening song begins markedly spooky with words hissed on a darkened stage by crouched individuals with gnarled postures. This tone swiftly shifts a few bars later with the ghostly atmosphere replaced by the light-hearted hustle and bustle of a village square.

Josh Carr’s lighting works in much the same way. Clusters of candles around the set create a Christmassy warmth which is reinforced by carols playing while the audience file in, but later those candles are given new purpose to offer spookier scenes a deeper sense of disorder and danger.

Chopping down the text to under two hours of performance means a transformation in quick-time is needed. Scrooge’s early hideousness is limited, which actually helps to make the show more child-friendly. The Ghosts Of Christmas Past, Present and Yet to Come cover good ground in good time and thankfully, no major narrative point is left by the wayside. Another notable child-friendly departure from the original is the addition of gleefully mischievous spirits who delight to torment Scrooge in the build-up to Marley’s arrival. It’s a device catered to the youngest audience members, inviting joint glee as they toy with Scrooge like tittering little pixies. It’s an interesting take on Dickens’ wandering tortured spirits and along with a fleeting glimpse of Santa and a Panto sequence, this production takes care to cater well to those expecting a festive season treat for young and old(er!) alike.

In the central iconic role we have Robert Pickavance who proves himself a dynamic Ebenezer. To begin, his Scrooge is SO highly strung and SO cantankerous with SUCH a short fuse that within five minutes of dialogue his manner is bordering on hysteria and his face sports bulging eyes and a permanent snarl. That’s how to communicate mean Scrooge in a nutshell alright. Pickavance performs Scrooge’s whole transformation with the same economy and makes his emotional journey no less impactful for the condensing of each stage of the story. His take on the reborn Scrooge at the close of the performance makes is impossible not to at least mirror his smiles as he bounds around the space trialling new kind sentences so very unfamiliar to his mouth but so eager to become a staple.

Tessa Parr is a saintly Ghost Of Christmas Past (Hayley Grindle’s inspired costuming helps, giving the ghost a constant light without creating too much fuss). She speaks in sweet, childish tones as she guides Scrooge through his former years until he begins to reflect on his actions. The Ghost Of Christmas Present breaks the spell of the quiet reflection which goes before in loud proud style. Elexi Walker bursts onto the scene with a grand manner of movement and speech to announce her existence to all the world in full colour and sound. She crafts something between a Panto Grand Dame and a kid’s show presenter, giving the production a large section of high-energy including a classic panto exchange to cement the show’s place as the Playhouse’s contribution to the festive season. Walker does very well to rouse a quiet audience and I’ll put it this way: if she hasn’t attended the class on how to rally an audience like a class act, then I reckon she could teach it!

The Cratchits are played with wonderful sincerity and a nostalgic purity by Darren Kuppan and Jo Mousley, with Mousley in particular capturing the thorough goodness of the struggling but honest poor household. Lipalo Mokete impresses in giving Tiny Tim even measures of the adorable innocence of childhood and the sensitive vulnerability of an ailing infant. The whole cast do of course multi-role to provide us with the full set of Dickensian classics but Joe Alessi proves the master with high impact turns as Marley’s shrieking Ghost, Mr Fezziwig in all his extraordinary eccentricities (more excellent costuming from Grindle) and the slimy Old Joe, basking in theft and haggling prices in growling indulgent tones.

Breaking the spell of the previous ghost again, the Ghost Of Christmas Yet to Come casts a long shadow over the proceedings to hammer home the terrifying message given to Scrooge: if you don’t change your rotten ways, if you don’t make the common good and kindness your business, then your future holds nothing but misery. Cheerful stuff! Worry not though, as Scrooge does of course learn his lesson and the show is able to end on a high note of Christmas cheer and good will to all in attendance and beyond.

Luckily for all, Dickens’ story is one of marked contrasts which makes consolidation a slightly easier task than it might otherwise be, and direction from Amy Leach ensures that each key moment preserved in this adaptation is given time to play its role sufficiently. Scrooge starts out mean and getting meaner while all others around him are higher in spirit and goodness. The Cratchits are kind and exude warmth from every pore. Fred (a lively, enthusiastic Dan Parr), the try-hard nephew is kindness and tolerance personified. Old pal Dick Wilkins and Topper (both played with a twinkle by Lladel Bryant) are light on their feet with a ready smile freely given. The Fezziwigs (played by great exuberance by Alessi and Susan Twist) are thoroughly joyous. And good old Ghostly intervention proves to be the perfect way to get Scrooge to shape up and match up to such good souls in all their endeavours. 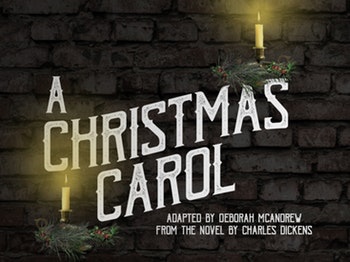 A Christmas Carol clearly gets a loving outing here. It’s treated as a classic to be loved and admired but brings it out from behind the dust cover to modernise enough to keep it on our stages and to keep the wee ones happy and engaged. Cuts are well judged and shouldn’t cause too much dismay for purists, although the departures from the original in the name of family Christmas show tropes just might! At the end of it all, this production reminds us that Scrooge’s story is timeless and thanks to productions like this, it looks likely to enjoy unlimited longevity going forward. Hurrah for the Christmas season and Gawd bless us everyone!

A Christmas Carol is presented by Leeds Playhouse in association with Hull Truck Theatre. It plays in the Pop Up Theatre until January 19th 2019 and you can find tickets here.

One thought on “A Christmas Carol: A Light & Lively Adaptation of Dickens’ Brooding Classic”