If there’s one thing Jersey Boys tells us, it’s that at whatever stage of reincarnation The Four Seasons were enjoying, Frankie Valli was always the star power. Each original and subsequent member has undeniable talent, but at the centre of it all and especially in the music, it’s Valli who finds the spotlight. 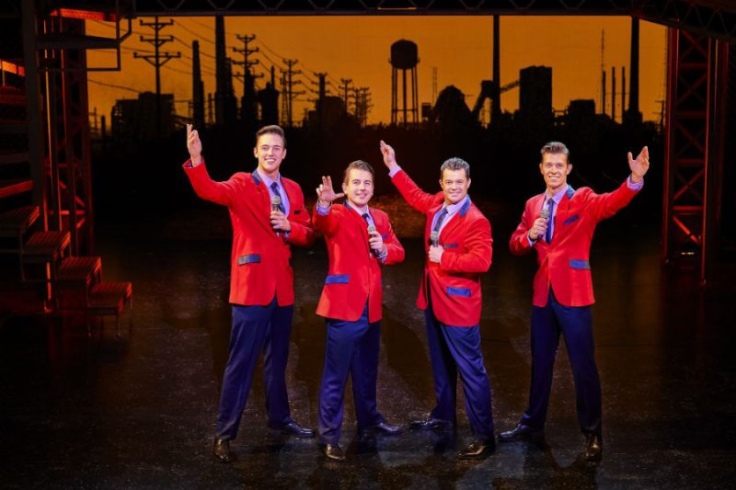 This lively musical takes us from the streets of Jersey where we witness young wannabes trying to make their way into the business via gigs and such to their rightful place on stages across America. With Book by Marshall Brickman and Rick Elice and Music by Bob Gaudio with lyrics by Bob Crewe, the production is supported by strong writing and a vast array of toe tapping hits. Expect everything from Earth Angel and Short Shorts to Sherry, Walk Like a Man and Can’t Take My Eyes Off You…along with twenty or so others!

Director Des McAnuff keeps a sharp pace a constant. The tale spins out seamlessly as one by one Frankie and the boys tell us a tale or two about this band’s journey from obscurity and incarceration out in Jersey to the very heights of their success. No sooner is the last note of a song sung but one of the guys has launched into an energised take on a pivotal moment for the band. Much of the narrative magic rests on the novelty of having such strong, well sustained American accents land on a UK stage – Italians and Jersey lads born and bred, the show is more than a little easy on the ears for songs and dialogue alike. And this slick structure of smoothly weaving enthused narration between snappy choreography and crooned numbers make this show a standout in the world of Jukebox musicals.

Michael Watson’s Frankie Valli begins as a quiet presence slowly brought into the limelight by Tommy DeVito. But while this Frankie makes his way into the narrative with an innocent, unassuming air, it’s not long before his voice announces his rightful place to be centre stage. Watson gives a fantastic performance which goes from strength to strength as Frankie hones his craft and as Watson hits his stride. And despite the head voice intensity, the only faces showing strain are ours as our eyebrows lift towards hairlines with the ever rising notes…

Stupendous voice aside, Watson gives Valli a lovely arc, mapping his journey from young up and comer to established artist and eventually the one to take the reins from an old pal no longer fit to lead after his own troubles threaten to overwhelm them all. Paralleling the professional journey is the domestic one. We see Valli meet and fall for the ballsy, brusque Lorraine, played hilariously by Olive Robinson who has some of the best lines and gives some of the best delivery to be found in this production. But it’s far from plain sailing for Valli and Watson delivers sensitive moments when they’re needed most. 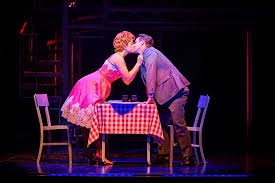 Tommy DeVito is our well-meaning trouble maker, played with copious amounts of inflated-chest pride by Peter Nash. DeVito is the wheeler and dealer with the gift of the gab back in Jersey as the band is starting out. He does what it takes to push the band from stalling to climbing the ladder but finds it difficult when his role as leader of the pack is challenged by those with artistic talents to far outshine his negotiating prowess.

James Winter’s Bob Gaudio is a fish out of water as the guy from a better background whose accent alone makes him a rival for DeVito and his ever growing chip on that shoulder of his. There’s a sincerity in Winter’s performance which gives the production a little more drama and warmth when it’s needed while Nick Massi’s dramatic moments are often boiled down to comic tantrums complete with threats to head out on his own. In fact, in Karl James Wilson’s Massi, we find yet another great source of comedy. A scene in which he finally explodes on the issues of hotel stays and towels is a particularly winning moment.

The Jersey Boys ensemble is kept in constant motion, taking up a great number of minor roles in record time. Three female cast members (Amy Thiroff, Olive Robinson and Tara Young) play ladies of the night, secretaries, wives, girlfriends, mothers and maids with a quick costume and wig change somewhere along the way. Wig and hair design rarely gets such a showcase as they do here; thanks to Charles G LaPointe, the women take every shade, shape and style in their efforts to convince us that there are in fact at least fifteen females in the cast.

An early witty back and forth proves to be the defining marker of Jersey Boys (aside from the music that is): a musical which is genuinely witty and full of surprising moments of great comedy dotted around between musical numbers and narration. While almost every actor gets at least a few stellar one liners, Joel Elferink’s performance as producer Bob Crewe is a sure fire source of a sassy quip and often such gems from Elferink are gifted to us with a devilish smug smirk and raised eyebrow combination. 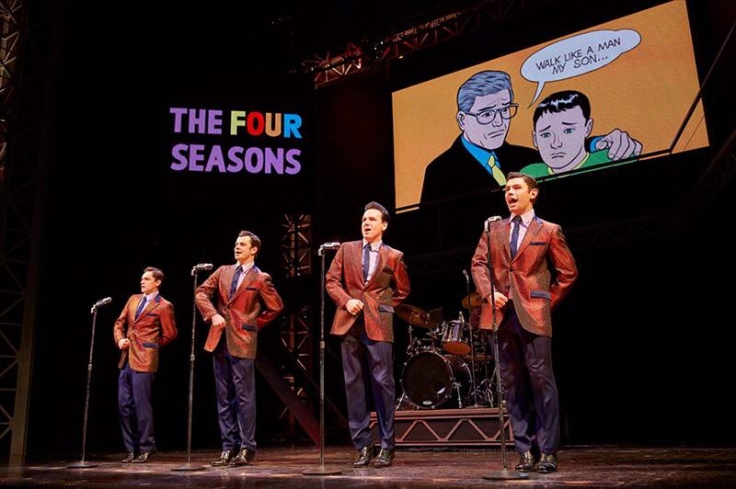 James Gibbs gets some of the best comic moments exactly right as Joe Pesci, channeling every over-eager teenager to inspire and endure a clip around the ear. And to complete the trio, Mark Heenehan really shines in the role of Gyp DeCarlo, with his booming voice perfect for the mobster world and his mildly threatening demeanour beautifully lending itself to some great comedy born of incongruity.

The look of Jersey Boys is stylishly understated. Scenic design from Klara Zieglerova gives us the basics – raw metal scaffolding which is multi-purposed well, removing all need to significant set changes beyond token pieces – something which plays nicely into the thrilling speed with which some of the narrative plays out. Projections from Michael Clark offer comic strip signs for underscoring key scenes, giving the production a layer of colour or light heartedness. Costume from Jess Goldstein takes us back to the sixties with underskirts and tailoring galore while Sergio Trujillo’s choreography raises spirits with gorgeously distinctive old school moves.

Jersey Boys is the kind of musical which leaves you humming away for the next few days. It has you laughing every five minutes and basking in nostalgic tunes every other three minutes. It’s pacy, engaging and has impressive comic and choreographed timing as precise as the shine on the shoes… With hits on top of hits on top of hits, great comedy woven into the very fabric of the production and some fantastic vocalists, Jersey Boys is well worth the trip – catch it if you can!

Jersey Boys plays at Leeds Grand Theatre and Opera House until December 1st 2018 and you can find tickets here.