As The Lakes Season (presented by Theatre by the Lake) winds down, the energy and panache of their productions picks up with Jeeves and Wooster In Perfect Nonsense – an adaptation of P.G Wodehouse’s The Code of the Woosters from the comic minds of the Goodale Brothers. 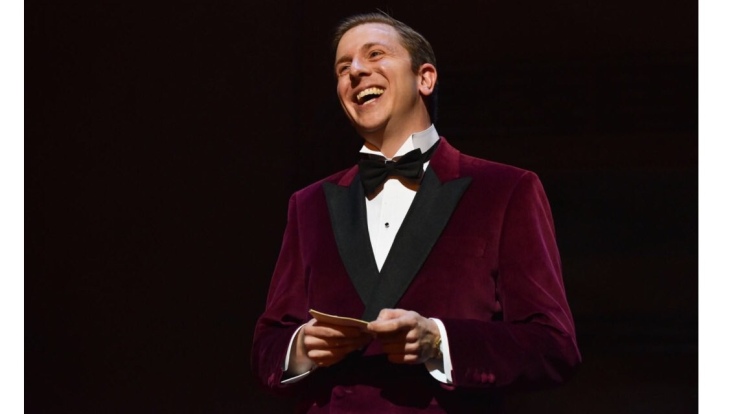 An impressively dexterous cast of three who most certainly have had their dose of Weetabix carry the narrative along at an almost perpetual jog, breaking into a sprint as each narrative hinge requires. Director Philip Wilson does let the action fall into a trough pace-wise when it comes to key scenes padding out the central narrative, but those departures don’t last long and we’re soon pleasingly back to the peaks.

As lead and narrator Bertie Wooster, Thomas Richardson plays to the audience with glee. The set-up here is that this spoiled member of the elite Bertie wants to tell us a story and he’s going to try his hand at acting it out for us. He soon discovers that playing so many roles himself is a tad ambitious and ropes in his staff who have some nice little surprises for their amateur actor in residence.

With teeth fully displayed in sweetly self-indulgent grins throughout, Richardson’s exuberant Bertie recounts the various comic events of his string of accidental or coerced misdemeanours. Richardson’s Bertie is a child in grown up clothes, in awe of the theatrical flourishes conjured by his staff and endlessly impressed with his own performance. 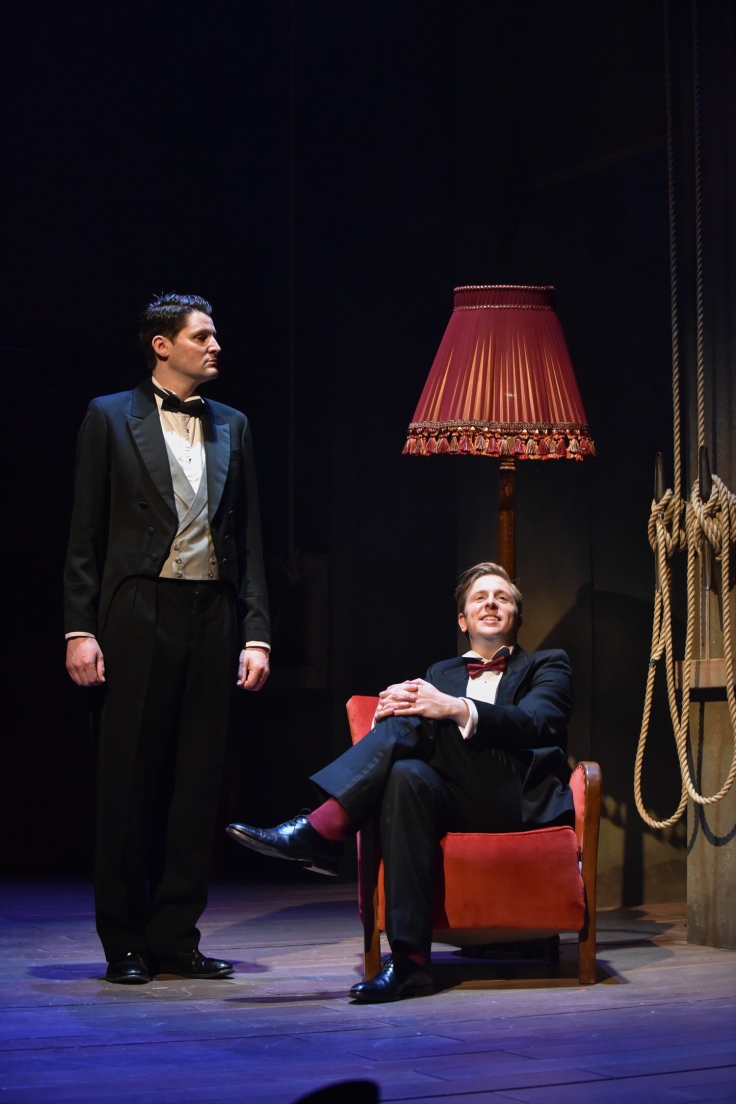 It’s butler Jeeves who stuns and delights this toddler masquerading as Lord of the manor. Theo Fraser Steele is brilliant in the role and carries the monotone air of all men resigned to servitude under command of an overgrown infant. There’s loyalty here and genuine efforts are taken to increase the enjoyment of his employer but the expressionless manner with which each display of humouring the boss is delivered are a source of instant easy comedy.

Seppings, another employee of Bertie-the-Bouncy, is played by James Duke with similar expressionless flair but with an additional layer of the seasoned, expertly restrained and highly ‘British’ servant. 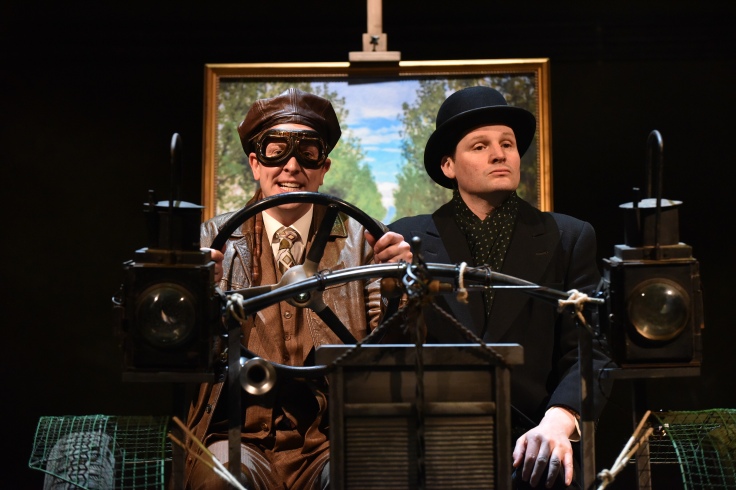 Of course, a narrative like this cannot rest on the shoulders of three characters and so our trio of lively men multi-role with entertaining transformations. Quick-changes and costume designs (Colin Falconer) or errors are therefore often the root cause of many a gag. Steele impresses best with the heightened comedy of playing uppity grand dame types who think highly of themselves and incredibly lowly of others but also takes a star turn as the deeply geeky fiancé of a potential match for Bertie.

It’s much the same with Duke whose best additional role is his female counterpart, Bertie’s scheming Aunt, fleshed out with florals and heels for maximum impact in such stark contrast with Duke’s well-played stoic or growling male characters.

It’s also Duke who ultimately steals the show here, with more roles to shape than the others and each delivered with equal zest even while the original character Seppings is left flitting and flailing to keep up with each transformation. His role as Antique dealer is a great one and Duke is wonderful in giving his fleeting roles distinctive ways – with thanks to Dialect Coach Charmian Hoare no doubt.

Perhaps the most impressive element of the production is the stagecraft. Designer Colin Falconer’s set holds some canny little reveals which serve to triple the impact of a good comic moment. Duke’s delivery of Falconer’s train crossing concept is a great highlight and while some elements encroach on panto level silliness, it’s nonetheless impressive in its imaginative approach to some of the best visual gags. 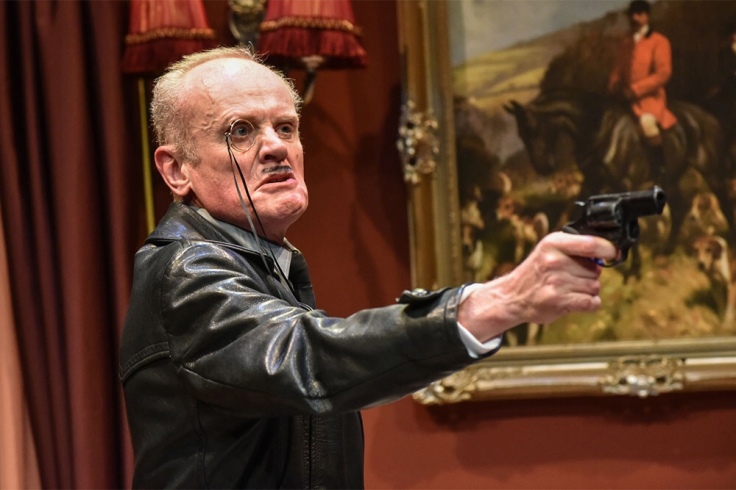 And if you think at curtain call it’s all over, the cast arrive to prove otherwise with an Eric and Ernie style dance finale (Choreography by Zoë Leigh Gadd) to end on a fun-loving note, complete with curtain foolery to milk the last few giggles and smiles.

The tale of Jeeves and Wooster in Perfect Nonsense is a winding one with all the elements of a good farce safely in place, though in truth the performances and stagecraft outshine a narrative which is decidedly basic at heart, filled with crises born of class and reputation woes of yesteryears and therefore lacking in real bite. That said, it therefore excels in capturing the comically earnest melodrama of period farces, all the funnier for the panic-inducing details often so alien to a modern audience.

Jeeves and Wooster plays at York Theatre Royal until November 17th 2018 and you can find tickets here.