Whoopi Goldberg remains as charismatic as ever. She’s a real force on stage and in watching her deliver her latest stand-up show, it’s easy to see that she is just as fearless and straight-talking as she was in her famous New York shows. In Whoopi Goldberg Live on Stage (a title as literal as her first book…Book…) we are treated to anecdotes in love and life lessons from someone so at home on a stage she may as well pitch up in PJs and slippers.

The delivery is everything from hilariously emphatic and incredulous to charmingly easy and mischievous – this is real star quality. Goldberg’s show covers grandchildren and family pranks, politics, the perils of growing older, awkward sexual encounters and some unfortunate moments when experimenting with staying ‘hip’. The best material surrounds the grandchildren and her takes on love, lust and marriage, but it’s all pretty good material. Using nothing but a little notebook as a reference point, Goldberg thoroughly entertains for the duration and uses the whole ‘let me just check I haven’t missed anything’ as just another smooth gag about eyesight, memory and ageing. 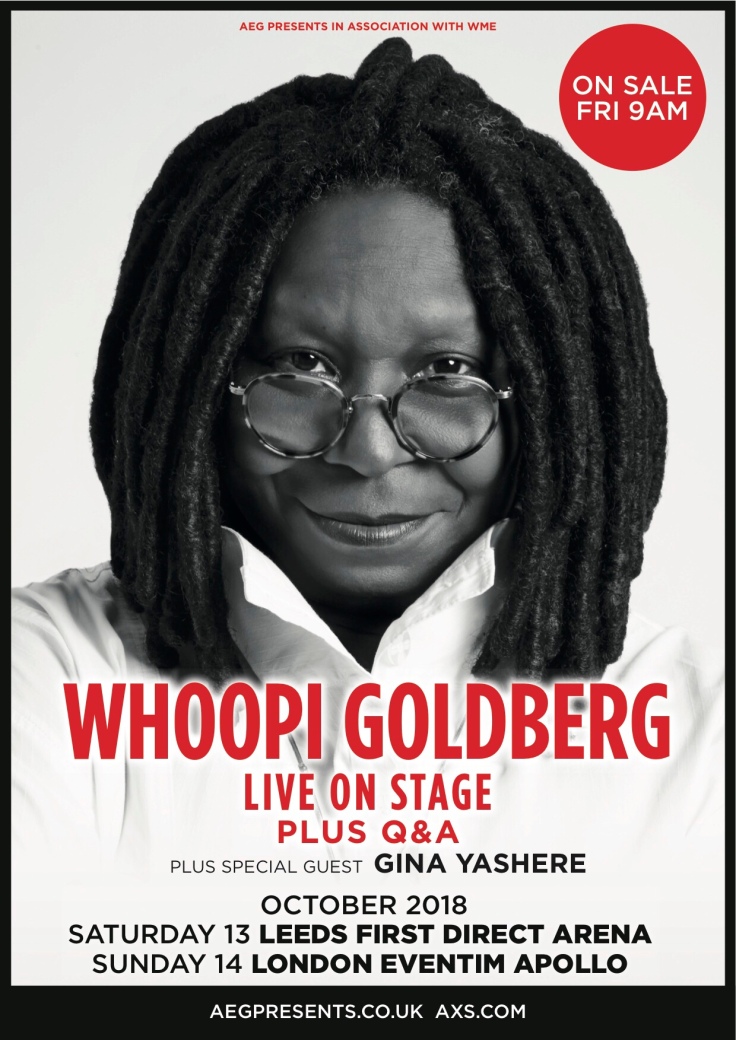 Goldberg’s support act is the energetic and very funny Gina Yashere. With lively delivery verging on a hype-girl style, Yashere quickly won over a room where she was not a very well known name. Her material is wide-ranging but the best of it surrounds generational divides marked by pop culture references and goods and the material on her upbringing in London in relation to her Nigerian mother. By the time Yashere prepared to leave the stage, there was a collective ‘nooooo’ from much of the audience who wanted more of her instead of a 30 minute interval waiting for Goldberg – I’d say she nailed it. 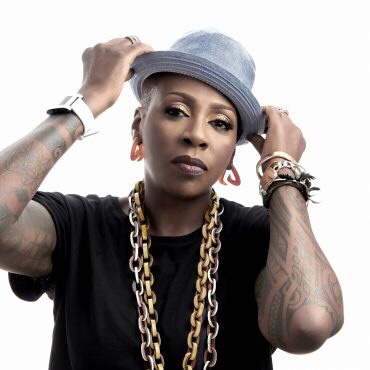 Much of Goldberg’s stand up is heavily reliant on her acting prowess; she re-enacts the moments she shares rather than simply narrating them; she raises belly laughs with a single look; she knows how to plant, manipulate and break a dramatic pause. Although she doesn’t brush off her characters from her previous stand-up, which might have been nice to see, she’s everything you expect her to be – outrageous, warm, frank and down to earth. Perhaps the best thing about seeing Goldberg away from a screen or stage, in her own clothes and in her own words, is that she proves herself to be every bit as funny, quick-witted and playful as her best characters.

Now, being such a wonderful performer with this winning stage presence would certainly have earned Goldberg a fully deserved standing ovation. But decisions made about the close of the show well and truly scuppered the overall success of the performance… 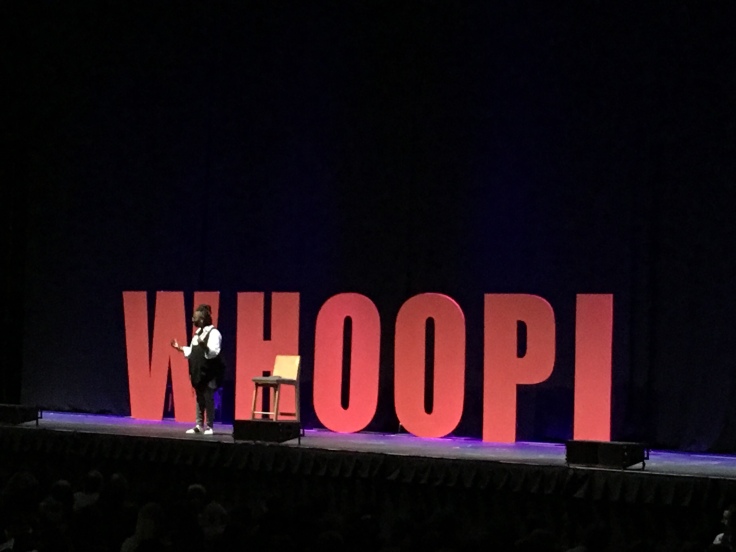 The show is billed as a stand up performance with Q&A attached – a nice idea and not particularly unusual, but most performers offering this element to their show do so via question cards handed out and returned for selection during the interval. Goldberg and team took another direction, and the pot holes in that road were hefty… Some audience members shouted questions without being handed a mic – often over each other. Some got impatient waiting and outrageously reprimanded Goldberg when she told everyone to be patient with ‘we’re waiting too long’, to which Goldberg, true to form, replied along the lines of ‘I’m doing the best I can and if you can’t wait then don’t wait.’

But that’s not the half of it. Despite being invited to ask Goldberg questions, almost all of those who got hold either a) gave an awkward speech on how much Goldberg has meant to them b) told Goldberg all about themselves with no question attached or worst of all, c) used the opportunity to ask Goldberg for a Meet and Greet, a picture or even to FaceTime/record a message to a family member there and then. 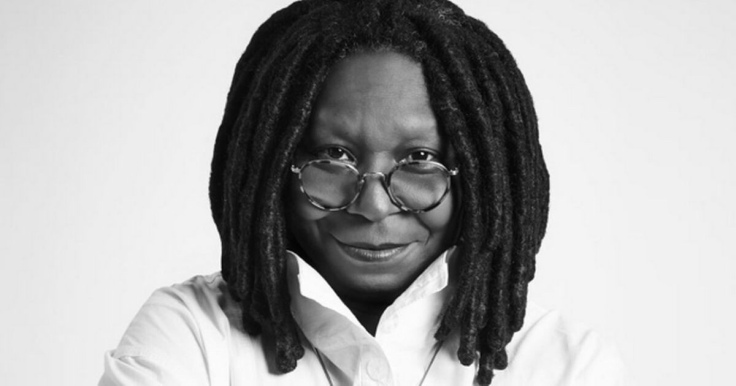 Even when the audience audibly groaned en mass at each shameless attempt to get something out of it, each person taking up the mic did so for their own self-interest. Goldberg had to tell people to be patient and to not boo multiple times. Of the ten or so people given air time, 3 asked genuine questions. Did we ever get the beautiful connection and a chat filled with insightful responses to thoughtful questions as Goldberg had no doubt intended? Despite those few relatively good questions, not even close – and worse, a good number of the audience got so fed up that they left during this shambolic twenty minute close to the show. 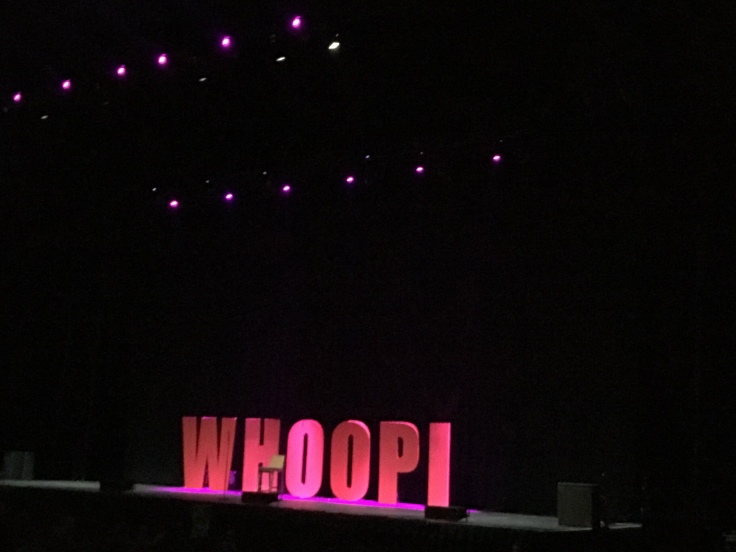 So, the audience didn’t get their exciting insights and poor Goldberg never got the standing O she deserved; her exit consisted of one swift answer to one last question, a quick bow and a quick exit – no return to stage for a second bow or encore. As it happens, support act Yashere most probably left the stage much happier than the star attraction herself, and that’s quite a sad thought really. I sincerely hope Goldberg’s London show tonight fares better – writing questions on cards is clearly the way to go. All I can say is that the first 90% of this show is excellent, as is Goldberg herself, but the last segment needs work.