This production is a real comic gem. It’s a new adaptation of Dario Fo’s They Don’t Pay? We Won’t Pay! by Deborah McAndrew and it’s packed with wit, sharp tongued satire and a whole bunch of ridiculousness.

Comedies taking on our current political climate tend to overdo it with the preaching and the rage but Fo’s play lends itself to a difficult brand of comedy with marvellous skill. The satire is so well embedded within the hilarious shenanigans that you recognise the references to the ever crumbling structures of our society while still being able to maintain the chuckle; the political elements are as much a part of the characters as the plot, so there’s no danger of clumsily crafted or forced resonance. Northern Broadsides ensures that it’s a wonderful northern line-up within the cast and there’s instant warmth between audience and actors as they invite a sing-along while crowds arrive. They’re like us; a Yorkshire lot sick of their lot but making the best of it all like real people do. Comedy fodder is wide-ranging, glaringly relevant and fun-loving, from visual gags to raised eyebrows and shameless puns – it’s action-packed and whether the moment is inside or outside of the fourth wall, it’s all brilliantly directed by Conrad Nelson. 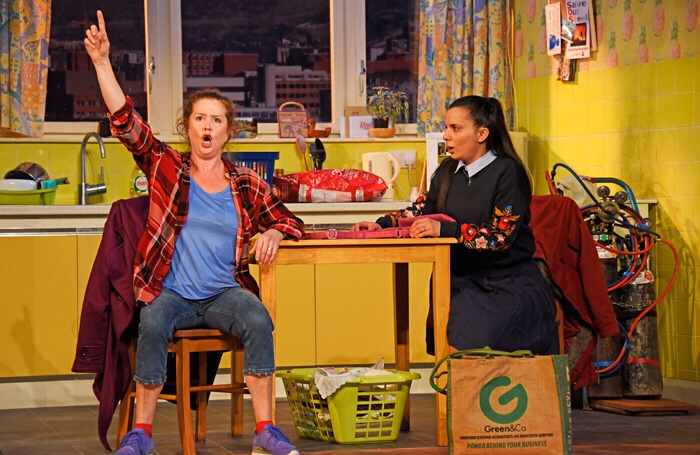 The plot is simple enough on the surface: real working class people struggling to make ends meet find themselves at a crossroads when the greedy big cats hike prices yet again. Bills are piling up, jobs hang in the balance and groceries are becoming luxury items according to the price tags – so what is there to do but rebel?

This community votes with their rebellious antics in the local supermarket and their uninvited, unpaid-for ‘Supermarket Sweep’ sets up the endless gags and wild goose chases filling the rest of the performance. We see hilarious takes on marriage, friendships, procreation and criminality to name just a few subjects hurtling by on Jessica Worrall’s set which conjures a cooped-up living space filled with bare necessities and luxuries only in miniature form. Simple stage tricks take us from home to the streets, where there’s just as much action going on and the production’s lack of complicated set changes allows Fo’s work to plough on full-throttle as it should. 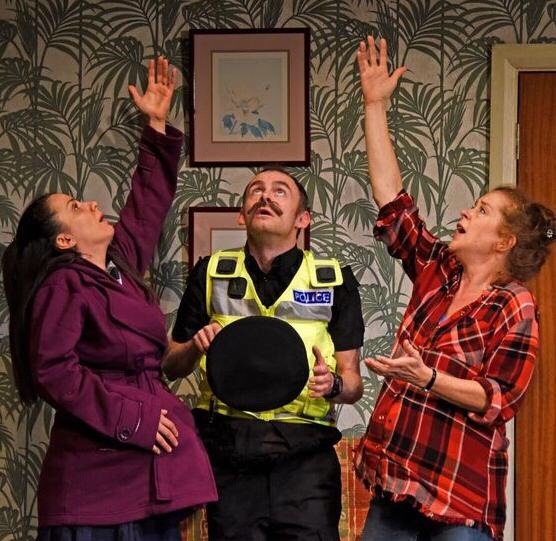 Despite ever growing ludicrousness, the cast keep up, keep us in the loop and keep it all just about credible as subject in a play like this. It’s a fantastic cast all round, but there’s no other way to say it…Lisa Howard is bloody brilliant as Anthea. Carrying the show as its catalyst, narrator and resident tall tale teller, Howard has her work cut out and is rarely away from the stage. Her lines are beyond pacy, leaning towards cartwheeled sentences in quick succession, landing the punchlines perfectly mid spin before flowing straight into the next and it’s incredibly impressive to watch.

Anthea is our rebellious spirit animal; in the face of outrageous injustice, she reacts in the spur of the moment and must get by with her gift of the gab when she returns home. Howard is incredibly likeable and we are absolutely rooting for Anthea precisely because Howard portrays her with such charm and warmth alongside her sheer cheek and shameless freedoms with that obscure beast Truth.

Anthea’s friend Maggie (Suzanne Ahmet) also doubles as something of a sidekick. For every fib and stretched-out, ridiculous story, Maggie has just the right reaction to confirm and cement the ‘truth’ of the tale. Highly strung and easily led, Ahmet is a fountain of comic reactions – Maggie is never quite prepared for the latest fib she’s been entangled in but she’s eager to make it work regardless; she’s all innocence and blind loyalty, allowing Anthea to twist her life into fantastical fictions at each turn.

Anthea’s husband Jack (played with likeable, earnest foolishness by Steve Huison) is as much of a puppet within Anthea’s storybook as Maggie is and he takes the brunt of the stereotyping here; temperamental within his marriage, a tad too emotional when things get dicey and blind to everything under his nose what with being a busy, principled union man and all. He’s also quite a bit dense, as is his foolish pal Lewis (Matt Connor).

Connor allows Lewis to be the younger version of Jack and it’s easy to see his marriage replicating Anthea and Jack’s in the future, with Lewis ever in the dark while believing himself throughly the man of the house with knowledge of everything worth knowing. Both fellas are gullible as toddlers and their stupidity leads to many belly-laughs. There’s nothing too outlandish to be considered a real possibility for them – I think they’d have had a rough time at school with the big lads making big claims before their wide, wide eyes! The winning bet for the menfolk lands on Michael Hugo though, who plays a variety of roles which are mocked and propped up as running jokes very early on. A constable and a sergeant are distinct via rather pathetic prop trickery and broad accents and such switcheroonies allow the cast yet more material for getting the big laughs through meta-quips and self-parody. Hugo showcases an impressive array of accents, characterisations and pivotal plot points in a role which is clearly an absolute gift for an actor.

This is a brilliantly silly and highly entertaining production which packs an awful lot into its running time. Fast-paced and generous with surprises and shock-tactic gags, it’s definitely an evening of laughs for all involved. The combination of passionate political commentary and general displays of limitless escalating hysteria is nothing if not thoroughly captivating. Laughs are plentiful throughout and while some scenes step away from the comedy to briefly take on an altogether more overtly political and glaringly didactic tone, the production as a whole rests confidently on its accomplished comedy. Catch it if you can!

Northern Broadsides’ take on Dario Fo’s They Don’t Pay? We Won’t Pay! plays at York Theatre Royal until October 13th 2018 and you can find tickets here.

2 thoughts on “Review: They Don’t Pay? We Won’t Pay! at York Theatre Royal”