Another film lands on stage with Dirty Dancing, and this show is more of a replica than any of the others I’ve seen.

That’s not necessarily a bad thing either – fans of the hit film are likely to enjoy being able to follow the accuracy of the plot sequence in near perfect time with the film version inevitably evoked in their head as they watch. The key scenes to make hearts flutter and knees tremble are all here, and most of the songs are too, so for Dirty Dancing fans looking for a fun evening of light entertainment, this should do the job nicely.

Everyone knows the story of poor wee rich girl Baby and her hunky bad boy Johnny, no? The hit film sees the rich and poor clash at Kellerman’s holiday destination, where the rich have their fill of their own status while local students playing waiters are encouraged to lord it over the very bottom of the barrel: the employees providing the leisure activities – most particularly the ruffian dancers who are from the wrong side of the tracks and are to be treated as such regardless of their talents.

But you can’t stop love, or lust, or a sweet but spoiled little girl from finding her own way in the world when love and lust steal her eyes from daddy and give them to Johnny. The discovery of this less than desirable attachment, alongside Baby’s infiltration of and acceptance into the after dark folds of the staff provide us our compelling obstacles for the evening.

When it comes to the performances, it’s a bit of a mixed bag. They’re all good, and some are great even, but across the show performances are on the uneven side. Francis ‘Baby Houseman is played with sugary innocence by Kira Malou who really goes to town on the Daddy’s Girl elements and there’s merit to that clarity, but the later displays of independence and emancipation feel a little underdone, as if Francis is scared of completely shaking off the ‘baby’ completely. It’s a nicely rounded characterisation and Malou does well to put her own stamp on the role.

In Michael O’Reilly, the production has found the hunky pin-up worthy of standing in Swayze’s uber-tight dancing tank and pants. But O’Reilly’s take on Johnny Castle is brooding to the point of unintentional displays of disinterest – the constant intensity somewhat undermines the alleged love of dance and means that the softer side arrives just a tad too late on for me.

Dr Jake Houseman gets a perfectly conflicted head vs heart portrayal from a likeable Lynden Edwards while Baby’s mother, Marjorie, gets a similarly gentle, likeable role from Lori Haley Fox. Our comic relief comes in a few shapes and sizes; most notable is

Lizzie Ottley’s high-pitched, utterly tone-deaf, rhythmically challenged take on Baby’s sister Lisa. The outlandish Mr Schumacher is played as a manic jester type by Mark Faith and pains are taken by Greg Fossard to play Neil Kellerman as more of a clown than the heartless crook he is. There’s plenty to laugh at here, and there’s some lovely comic talent to entertain after some of the more underwhelming moments.

Roberto Comotti’s set is something which allows this show to descend into panto-land with flimsy constructs designed to give a general sense of things like a whole car or a whole bedroom which are all just a little too small in scale or cartoonish to be taken seriously, which is a shame as some of the key scenes could have been lifted considerably if the naff set wasn’t such a distracting back drop. 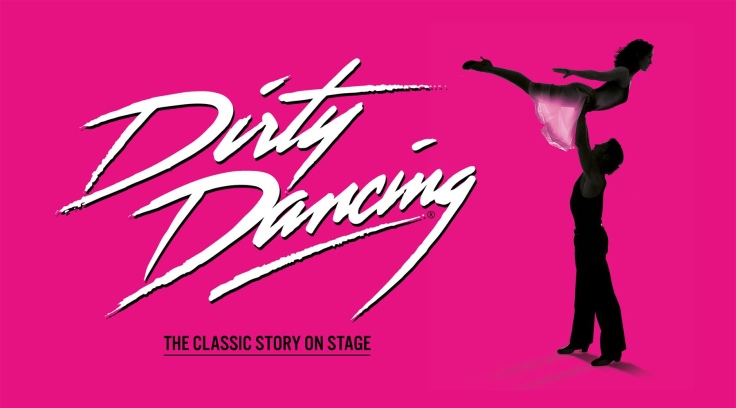 What the show really excels with is, of course, the dancing – and yes, plenty of it is indulgently dirty. This story from Eleanor Bergstein wouldn’t be worthy of a stage without it and Gillian Bruce’s choreography gives the production a great sense of energy and sensuality – lifting the pace at just the right moment and giving the whooping, whistling audience exactly what they want to see with all that lingering thrusting.

Also fantastic are costume designs from Jennifer Irwin, who has Baby’s sister in gorgeous fifties A lines with Alice bands, looking the picture of desirable femininity while standing next to the disheveled in denim and t-shirt infantilised lead. Dancers sport figure hugging outfits to make sure that every hip shimmy is noted while beautiful Strictly-worthy numbers make up the wardrobe of Simone Covele who owns the stage every time she dances on it as the ill-used employee of Kellerman’s, Penny Johnson.

This is a typical modern film-to-stage piece which does well to please the crowds with recreations of some of the most iconic moments caught on film in modern cinema. There’s nothing groundbreaking or particularly show-stopping about the production elements but there’s certainly enjoyment to be found – it was a pretty chipper audience around me by curtain call!

Dirty Dancing is directed by Federico Bellone and presented by Karl Sydow and Joye Entertainment in association with Lionsgate, Magic Hour and a Tripe Entertainment Group. The show plays at the Grand Opera House York until 13th October and you can find tickets here.