Ian Hislop and Nick Newman’s The Wipers Times is based on the fascinating and heartening true story of WW1 soldiers who began printing a wartime publication after discovering a working printing press amongst the rubble in Ypres. The play follows seven British men knee-deep in trench mud and wartime routine – with inaction and action taking turns to appear, the men set about writing this paper in the trenches in their down time. While the paper is aimed at soldiers and written by soldiers, it’s far from a collection of heart wrenching stories and anger…

The Wipers Times is a comic, satirical and subversive paper full of wartime wit, tongue-in-cheek advertisements and various poems and stories contributed by fellow soldiers eager to be a part of such a uniquely different pastime in the trenches. The humour is all nudging elbows, arched eyebrows, puns and mock-calamity which doesn’t quite make it necessarily laugh-out-loud, laugh-a-minute funny for everyone, but it does keep the amusement ticking along nicely for the duration.

What really brings the art of Hislop and Newman’s writing to the fore, is of course the rabble of men delivering the material – this production features an impressively likeable bunch who each have their own way of inspiring connection with the audience – we want to like them because they are of course brave heroes of a past war, and by gum they make that an easy task indeed. James Dutton is a worthy leading man as Captain Roberts – The Wipers Times is his brainchild and he’s determined to see it through, publishing right up until the armistice. Dutton gives Roberts a vital air of playfulness and allows us to root for him and his winning love for innocent fun when he faces his superiors. The publication is harmless banter for most, but for Roberts it is also a worthy calling in troubled times and no doubt a great release from his official role.

George Kemp is equally endearing as Lieutenant Pearson – the mild-mannered sidekick with a twinkle in his eye and an unshakeable good nature. Between the two of them, Roberts and Pearson keep the men in line and entertained at the same time – their relationship defines comradeship and their shorthand and ease with one another as they toy with the strict boundaries their ranks demand of them makes them a winning and engaging pairing. Sam Ducane is also brilliant as the uppity Lieutenant Colonel Howfield, resident stick in the mud with a penchant for total order at all times. Ducane’s Howfield always appears to be chewing glass whenever discussing those darn men and their darn paper, much to our amusement as an audience very much on the side of those darn men. Ducane also shines in a brief role as a French photographer, showcasing his comic talents not just with the highly strung high rankers but also as the temperamental civilian with a job to do. 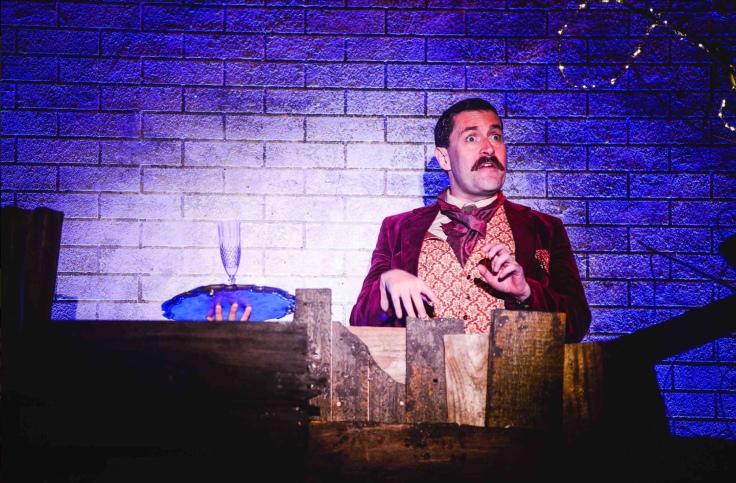 Directed by Caroline Leslie, this production has significant highs and lows. A platform on which the men play out various farcical advertisements, playful letters or dramatic tales brings a wealth of comedy in the most apt of forms for this show; slapstick, token costume, drag elements and melodramatic affectations – it’s a real highlight of the show. On the flip side, we have another war play restricting itself to a single lighting (James Smith) specification: gloomy. There’s merit and logic to that of course, the men are mostly in trenches and offices and this is 1916 wartime.

However, this is a comedy which naturally allows for more variety and as it isn’t a brutal drama, breaking away from the general dimmed lighting and gloomy shadows would be both acceptable and absolutely welcome for those like me whose eyes tend to betray them when watching stagings so dimly lit for the duration (no matter how entertaining the performances or how strong the material might be I quickly add)! The near-constant almost blackouts to allow for the plentiful scene changes not only exacerbates this sense of doom and gloom within a comedy, but also quickly begins to slow the pace. If I never see a scene change in shadow or black-out again, I’ll be a very, very happy lady…can someone please make them stop?

Gripes aside, The Wipers Times is an entertaining few hours of jovial characters, witty jokes and that magical rip-roaring style so deeply associated with wartime and ‘our boys in the trenches’. Not only does this production handle the comic material well, it gives glimpses of the gravity of the perilous situation facing the men when they find themselves in the Battle of the Somme. For all their leg-pulling, these men are at war and for all the light-heartedness of this play, it respectfully takes a moment to acknowledge this reality ever so subtly. The material is great (the programme is also packed with comic gems), as are the performances – but I’d like to see a slightly more fluent, pacier, brighter production I think. Either way, The Wipers Times is definitely worth a punt old chaps!

This production of The Wipers Times tours until December 1st 2018 and you can find venues, dates and tickets here.