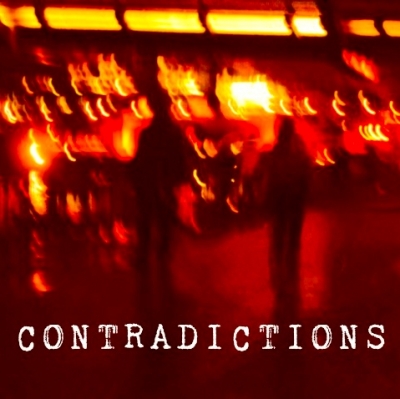 Contradictions from Nivedita Gokhale and Not a Dull Boy Theatre presents an interesting vision of relationships, modern dating and technology, but doesn’t always do so with clarity and the central aim of the piece to explore how two Indian ‘skilled migrant workers’ are ‘adjusting to the first world western culture by being hybrid’ doesn’t really find meaningful space within the narrative at all – at least not beyond the obvious premise of modern dating dynamics clashing with traditional Indian views of relationships. The play looks at two characters, played by Gokhale and Kaustubh Valdya, who meet the morning after the night before in a strange living room. The narrative shifts backwards to enlighten us at to how these characters came to be in this odd situation. Despite a lovely little twist at the end, this show is very static with copious pregnant pauses, clunky transitions and uncertain performances.

Our characters snipe at each other and are ill-matched from the get-go, leading to some nice comic moments of incredulity as neither offers inhibited pretences or ‘best date behaviour’ – unfortunately, while being a comic layer early on, this aggressive, self-centred characterisation of both characters leaves us with no one to like or root for, meaning we’re only really interested in solving the puzzle of where they were at the start and why. The use of technology is an issue here as we are too often left watching two people sitting in silence scrolling, or constantly watching our unnamed female taking calls – either dishing out cooking advice or arguing with someone without giving us any detail. Yes, it plants our story in modern culture, but it’s not gripping – kind of like watching the Gogglebox folk before they settle down to watch the shows; shoes are cleaned repeatedly, coffee is made, drinks fetched unnecessarily and silent scrolling from disinterested strangers is a staple…

There’s some political discussion interwoven into the dating schpeel which serves to highlight some key differences between our protagonists and highlights some well considered irony which parallels Trump with Brexit, but the increasing presence of political bulletins offers no additional insight into either the characters or the real relevance of those news reports. There are a few brief references to each other’s ‘Indian-ness’ but there’s no clear connection made between Indian culture or migrants adjusting to ‘western culture’ and the politics which creep in suddenly half way through. Contradictions begins to feel like a very apt title and I’m left feeling that I’ve missed the point at which the significance and meaning of these references was pointed out… There’s an odd shift as news reports begin interrupting the action – phones are pulled out frequently as news alerts arrive, detailing political events, but there’s no real connection made between the characters, their lives and the political climate which intrudes sporadically – they don’t discuss the news reports played for us, so we’re left to try to find correlation between Theresa May meeting with leaders and our protagonists showing glimpses of their work lives; he a weather reporter and she a chef – try as I might, I could see no correlation.

I think the premise here was a nice idea – the non-linear narrative creates intrigue early on, and our characters are unconventional daters but it’s all a little too static, too clunky and too lacking in clear purpose or depth to really hook or inspire real investment in the characters.

Contradictions plays at the Etcetera Theatre as part of the Camden Fringe until 18th August and you can find tickets here.