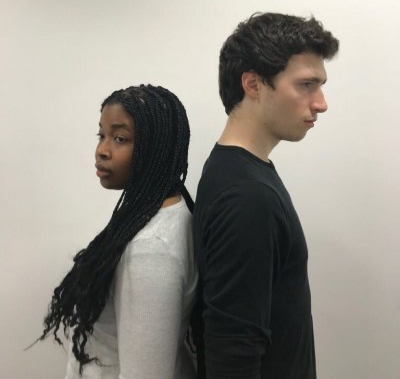 Christina Alagaratnam’s Face to Face is an intense sixty minutes of fascinating, though-provoking and disturbing theatre. A pounding two hander which delves into the territory of murder and the consequences the innocent face when their lives are entangled with criminals, this new play handles its territory with great care and sincerity. Florence Williams plays Emma, the daughter of a man brutally beaten by a local gang, including the deeply troubled person she now sits across from in the prison visiting room, Scott, played by Elliot Windsor. The narrative skips back and forth through stylish movement and monologues from our protagonists, and rather than a straight forward drama, Rachel Mervis directs the piece as an intense piece of dramatic physical theatre, featuring synchronised soundscaping from Windsor and Williams which pounds furiously so that the room itself vibrates, bringing us uncomfortably close to the fiery exchanges occurring.

This is a complex story full of questions with few answers; it’s not just one tragic story, but two – two young people without parents, it’s just that one of them violently took the other’s parent away. There’s a spectrum of innocence and guilt to contemplate too, as the young tearaway turns to crime and poor role models through necessity, but the story never seeks to excuse the crime, but rather to invite contemplation of all of the facts, including what leads a young lad to spiral as this one has. Each time Emma seeks some remorse from Scott, some display of emotion or regret as she talks of the man he killed, Scott has a depraved response or a disturbing claim about his own childhood; it’s never clear cut, because there’s always additional insight thrown in along the way. Despite such glaring disparity between upbringing and morality, the two are similar in intriguing ways, sharing feelings they can only struggle with internally, hiding from the truth while searching for release – it’s very fine, perceptive writing from Alagaratnam.

Both actors are excellent performers capable of playing a rollercoaster of emotions with credibility and depth. Williams’ portrayal of her character’s inner turmoil in facing her father’s murderer plays across her face while her mouth deceptively gives embittered, searing speeches. Windsor’s disturbed, remorseless, complexly contradictory portrayal of the villain keeps us guessing – his cold, callous words inspire hatred but a brief look away or a moment of uncertainty betrays him and gives a glimpse of the boy behind the big lad act. Windsor’s performance borders on alarming, such is the rage he conjures for his character – his entire body vibrates with it, his mouth twists out the words through gritted teeth and the veins in his neck threaten to explode – it’s an all-out, all engines raging performance which made me physically flinch more than once. Powerful stuff.

There’s a lot going on in Alagaratnam’s gritty drama, and its complexities are its selling point – along with the stylish physicality and use of sound. Lots of plays are thought-provoking, but this is challenging and puzzling with a plethora of avenues for the mind to wander down when it comes to ethics, innocence, guilt, class systems and ‘failed’ youth, gang culture and on and on, all linked to the vicious cycle of a life tied up with crime in any way, be it self-induced, a necessity, an inevitability or simply a victim of… There are some lulls, and perhaps one too many lengthy speeches thrown in, but this is a wonderfully dark and intrusive piece of new writing which grips early on and holds on tight.

Face to Face is presented by HiddenViewz Theatre. It plays the Camden Fringe at the Etcetera Theatre until 6th August 2018 and you can find tickets here.