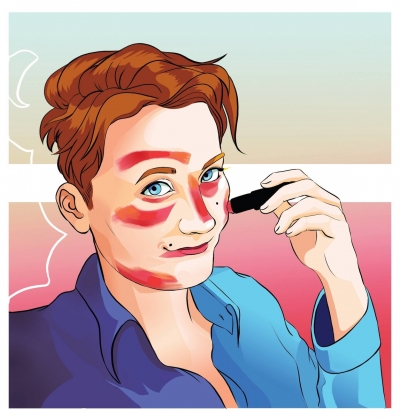 Miranda Porter brings new show S/he/it Happens to the Camden Fringe after a sell out run in Brighton. They’re passionate about raising awareness of Gender Identity and Gender Dysphoria through a solo show packed with personal content. The show plays the Camden Fringe at Etcetera Theatre until 3rd August 2018 so I caught up with Miranda to cover all things new show, Camden Fringe and theatre…

Tell us a little about your show S/he/it Happens – where did the name come from, what inspired it and what’s the show all about?

The name came very early on in the show’s development. I knew it was a comedy about gender, so a friend and I scribbled down all the words we could think of relating to gender – including all the words we could find for chests/boobs. ‘S/he/it Happens’ stood out as the best idea so I’ve run with it. Although I have discovered people often aren’t sure how to say it (I say She–he-it Happens) and forward slashes don’t work in hashtags!

The show is about gender dysphoria. There’s one character who enters their office to get to work, but soon reveals their desire to change their body and voice. They try to make these changes possible with the objects they have available – with varying success. There’s hilarity and mirth mixed in with the reverence and vulnerability of a profound struggle.

You’re heading to Camden Fringe following a sell-out run at Brighton Fringe and Wandsworth Arts Fringe – what has the reception been like so far and how have you found the experience of your first solo show?

I’m delighted that it’s had an extremely positive response from audience and critics so far. I think it’s one of the first pieces of theatre to focus on chest dysphoria. Some audience members with experience of dysphoria have been very moved by seeing this issue represented.

Solo shows are a challenge! I’ve got used to being “alone” onstage, although the fourth wall is almost transparent, so the audience are there with me in each show. The biggest challenge is directing myself and giving notes requires a split personality. In rehearsals I film and watch myself a lot and I’m extremely grateful to the many outside eyes I’ve had throughout the process. I think it’s possible I’ll make more solo shows in the future, but I am always looking for more opportunities to collaborate.

How did you come to the decision to perform a textless physical theatre piece as opqposed to more traditional solo show styles to share your experience?

I studied in Spain for 5 months a couple of years ago as an Erasmus placement. Everyone who I studied and lived with was Spanish and most of them spoke very little/no English. Although my Spanish improved, I still found it difficult to communicate. Amongst my peers in London I was fast-thinking, quick-witted and forthcoming with ideas, but the language barrier meant I was always behind everyone else.

I became much more reliant and aware of body language and physicality. Meanwhile, I started watching more theatre in Europe and sought physical-based productions that I could relax more whilst watching .This June I went back to Spain and performed the show there. My friends who came were so delighted and surprised and it received a standing ovation. I think in many ways the show articulates who I am and what I do, better than I can articulate in Spanish, and even in English at times!

You recently worked as assistant director on Wild Life by The Ding Foundation – has such an experience developed your craft as performer and creator of new work?

Wild Life is also a textless production, with the first half performed by a live actor who then falls through the back of their arm chair and into a strange jungle-like world, switching into a visual language of puppetry.

I’d had a little puppetry experience before but working on the show developed my eye for detail and articulation in the puppets. You want the audience to be able to see what the puppet is thinking by the way they move, and I apply the same principle in S/he/it Happens. E.g. the way I look at an object and pick it up indicates the character’s thought.

Speaking more broadly, I think it reiterated how much time, energy and attention to detail is required when creating new work. I believe it takes patience to sit with a show a long time and fine-tune it. I’m continuing to fine-tune and play with ‘S/he/it Happens’, a year after I first performed it.

Readers may not be clued up on chest dysphoria and gender identity, which this show focuses on – would you say an audience would benefit from reading up before attending or is the show designed to be illuminating?

I would always encourage anyone to read up more about trans issues and experiences. If you have the time, please do! (I’d recommend the websites of ‘Gendered Intelligence’, ‘Mermaids’ and ‘All About Trans’ as good places to start.) I think the show illuminates the audience to the experience of gender dysphoria and I hope it prompts people to do further research after the show if what they see is new to them. I would say it depends on each audience member; depending on if you would like to be able to articulate what you’re witness during the show or after!

Gender identity is part of common parlance within LGBTQ+ communities but the mainstream is only just beginning to catch up it seems. Do you consciously intend to educate as well as entertain with S/he/it Happens?

Emphatically, yes! Both within and outside the LGBTQ+ community. Recent events such as the anti-trans-protestors at London Pride this year prove there is still much we need to change.

Young people seem to be more knowledgeable on gender identity than older generations have ever been – do you feel a weight of responsibility in bringing an all too rare show like this to the stage?

The show is very topical and provokes important discussions that I believe we should be having in society today.  At times the responsibility is draining. However, I also feel an immense pride, privilege and fire to be side by side and on the shoulders of trans siblings.

From reading the details of the show, I think young people exploring their identity might find this incredibly empowering – would you recommend your show for teen audiences?

I certainly would! Although it’s important to note, the show has non-sexualised partial nudity in it in addition to exploring the topics of dysphoria, misgendering and unsafe binding practises. I am not aiming to promote unsafe binding practises in any way, rather I intend to express desperation in a comical and extreme way with visualimpact.

What would you say are your core intentions as the creator of play like S/he/it Happens?

If an audience takes just one thing away from seeing S/he/it Happens, what would you like that to be?

A more in-depth understand of chest dysphoria and a greater consideration about why someone might wear a binder or have top surgery.

Now for the Quick Fire Round!

Kallo Collective – in their artistic excellence, innovation and integrity. I’m feel extremely proud, privileged and humble to have worked with them a little on this show.

Has to be two! Physical Theatre as it has the potential to transcend language and express what language can’t, & Queer Theatre for celebration, pride, aesthetics and revolting against the status quo.

Etiquette debates – worthwhile or futile? Where do you draw the line?

Worthwhile. Draw the line when everyone feels validated, accepted and equal. Oh, and when trans actors are cast in trans roles.

If you could bring change in terms of opportunities in Theatre to London right now, what would it be? What does London need?

Trans narratives, with trans artists/creatives onstage and offstage. Did I mention trans actors should be cast in trans roles…?

Finally, to close, sell your show to readers in just one sentence.

Probably the only show in the Camden Fringe with boob puppetry…

So there you have it! Remember: S/He/It Happens plays the Camden Fringe at Etcetera Theatre until 3rd August 2018 and you can find tickets here.