Whitney Houston, Mariah Carey and Celine Dion were the powerhouse voices of my teen years (pre-Streisand discovery). Warbling along shamelessly to songs I could never hope to reproduce as anything less than a dying cockerel rendition was a favourite pastime. So when the opportunity arose to see Ms. Whitney Houston live, I was, frankly, quite beside myself. I believe we had booked to see the show in Manchester, but our date was cancelled, so we re-booked for Nottingham to see the Nothing But Love World Tour. We were ten rows from the stage, close enough to see the strength and the sweat shed by this music legend, eight rows from her daughter, Bobbi Kristina who could be seen supportively bopping away in the audience.

Houston was first and foremost deeply charismatic and very warm, but this was not Whitney in her magnificent inimitable prime, and like all singers, her voice had changed with age, becoming huskier and mellowed (though still capable of those huge, much loved Whitney notes). It’s a well known fact that her lifestyle for a significant period of time led to vocal damage and a permanent shift in her range, but we were still undeniably watching a phenomenally talented songstress and when she delivered, she delivered, and she did so for majority of the concert.

Houston came across as incredibly considered and wise, too; I can’t recall the exact wisdoms now, but I have a definite lasting impression of her insightful anecdotes and her honesty about her sense of re-creation and her fresh start after her hiatus. She was full of gratitude and stories for us.

Criticism of the time it took for a costume change at an earlier tour date led her to be oddly and unnecessarily apologetic, giving a gushing apologetic speech which was almost grovelling and left us non-plussed…don’t most music stars have a number of costume changes, leaving their back-up dancers/singers and musicians to entertain the crowd for the interlude? It certainly felt like she’d been burned by the harsh criticism from the prior date. And the family members who were left to entertain us in the interim were great.

So what do I remember most? I remember the beauty of both her and her voice; costumes were elegant and figure-hugging, showing off a body earned through hard work. But there was absolutely no preparing for seeing that wide, sincere Whitney Houston smile in person – I can still see her on that stage ten rows away in my mind’s eye, and when I remember, I remember that smile – a sincere smile that surely came from the love of the music that secured her such stratospheric success.

I distinctly remember her owning every metre of the stage, working the audience for Million Dollar Bill and I Wanna Dance with Somebody like the absolute pro she was before mesmerising us with those much loved ballads, introducing each one feelingly with a little background. 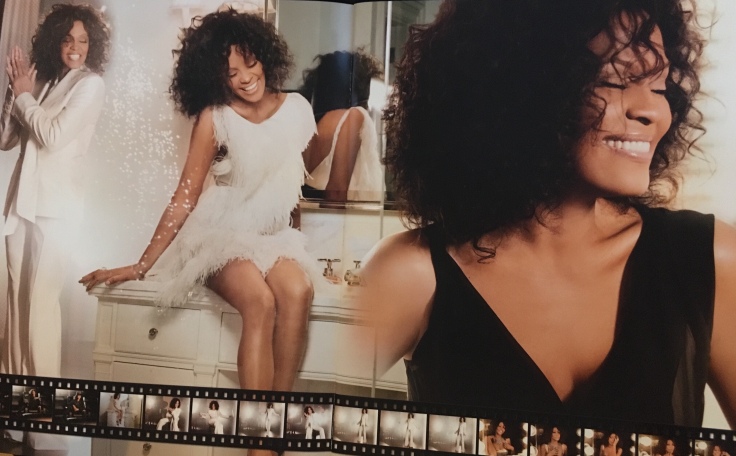 I remember her good humour too – she warned us at the start that her voice was a little strained after so long on the road and that we might be out of luck on a few numbers. When she went for the big high note at the end of I Will Always Love You and it came out as a breathy whisper – her heart saying yes and her vocal chords saying no – she cracked up. She laughingly apologised and we laughed with her, then she went straight back to it, skipped the high note and renewed her status as vocal goddess with a beautiful belt in a lower pitch. Oh yes, she absolutely still had it.

Which brings me to my moment of frustrated defence… I remember even then being perturbed by the unnecessary negativity and dismissal I was reading from critics. It was like they had all forgotten to shift the goalposts for performers who tour decades after the height of their success. Nobody expects to hear the clarity of 60s Streisand in the velvet tones she delivers now that she’s in her seventies. People still rave about Liza Minelli’s live performances despite the fact that she can no longer belt Maybe This Time at full pelt, often opting for gentler songs she can half-narrate, half-sing. I get the distinct impression that because she was in her fifties and therefore still relatively young, Houston wasn’t given the same consideration.

My issue with that is that while people were so fixated on the drug abuse and tragedy of her life, they failed to appreciate the connection that such abuse likely had aged her talents into a slightly different sound prematurely, creating all the more need for realistic expectations. And what’s more, she hit the notes we were waiting for almost every time, and that’s pretty darn impressive when you consider the fact that this was an extensive tour following a significant hiatus from the stage.

If anyone had been paying attention to her career and personal struggles (and anyone who had heard the latest album, Nothing But Love), there should have been few attending expecting to hear a powerhouse Whitney in her prime. What we heard instead was a mellowed sound with plenty of powerful moments of big belting and that beautifully distinctive tone of her voice which had only shifted in pitch, not in beauty or distinctiveness.

There was a beautiful tribute to Michael Jackson, which is all the more moving looking back because she was of course so soon to join him as an icon gone too soon and a greatly missed talent. A silhouette appeared on a screen and she sang to him in tribute, with the visual of one music legend serenading the memory of another proving to be one of the moving parts of the show. Another moving sequence was a passionate segment of gospel music; clearly a heartfelt throwback to Houston’s musical origins and her family connections to gospel. She brought the house down with those songs and she even managed to move herself along with the rest of us, getting emotional as she pulled the band into several repeats of the refrains. It was beautiful and it was heartfelt – a real memorable highlight for sure.

This really was the concert of a lifetime and I felt lucky to be there when I was there and of course I now feel even more privileged to have had the chance to see Whitney Houston’s blazing talent before she departed far too soon. I remain absolutely devastated that I lost the memory card to my camera at a London museum, losing the few pictures and short videos I took on the evening – I wish I had them now to challenge the naysayers… She was brilliant. Maybe not the whole time, but she was brilliant nonetheless and I am so grateful to have been in the audience.

One thought on “Lasting Impressions Review: Whitney Houston’s Nothing But Love World Tour”