Section 2 is the second play from the relatively new company Paper Creatures Theatre, and it’s their second piece of work to tackle big issues in relatable terms. As a new work written by Peter Imms, Section 2 seeks to explore ideas around mental health through the character of Cam, his girlfriend Kay and to a lesser extent, Cam’s friend Peter and his nurse Rachel. The play explores the impact of mental health issues not just on the individual experiencing the health crisis, but those surrounding and supporting that individual – those pushed to breaking point or great distress by their love or care for someone they are desperate to help only to find themselves utterly useless. It’s an interesting approach and considering how topical mental health is right now, this play does well to tastefully depict one man’s story without sensationalism or clichés. Tipping the scale in favour of drama rather than dark comedy this time allows the company another string to their bow, and it’s a very nicely played out drama which builds slowly to begin with but soon breaks into a gallop towards heavily charged and powerful closing scenes.

Imms’ play is set on Day 28 of Cam’s sectioning: today is the day he goes home or stays for a considerably longer period of time. No one has answers to the big question: what has happened to this young man to send his mental health spiralling like this? The piece takes us not just into the living quarters of a sectioned person, but also into the intimate space of the visiting room where our characters awkwardly try to establish new ways to be around each other now that Cam is a stranger in his own skin – he doesn’t ‘know what’s happening’ to him and Imms makes an interesting correlation between mental health issues in the young and the mental deterioration of people in old age; expected and accepted in one sector of society but strange and unnerving for another. It’s a play which gently educates about the systems of sectioning, and some may find it enlightening and perhaps disturbing to hear about just how quickly a person can get sucked into a system. Interesting food for thought is offered up too, about levels of acceptability when it comes to mental health; how much can a person suffering with mental health issues be held accountable for their actions? At what point do natural feelings of empathy or sympathy for those suffering fall away to be replaced by accusations of criminality and a brutally swift exile from society?

Under direction of Georgie Staight, Nathan Coenen gives an intense performance as Cam. Coenen’s wide-eyed terror combines with recurring scenes of empty stares, shuffling and clear lack of engagement which are tactfully played and there’s some lovely nuance in his movements to remind us at all times that Cam is never really himself, he’s merely having a moment of clarity before relapsing into his state of being at a total loss. Cam’s role is often silent to allow us to see how those who interact with him try to make any kind of connection they can – the role is in fact surprisingly silent and this makes the play a little stunted in places with a few too many drawn-out pregnant pauses – pauses which have great impact to begin with but lose some of that force when they seem to dominate successive scenes. Alexandra Da Silva is equally intense as Cam’s struggling girlfriend, but her intensity is all pent up frustrations and rage let loose underscored with bruised emotions and a desperation to save someone who can’t be saved right now. Kay’s selfless actions in attempting to protect Cam from a scary system and from knowledge of himself can’t save her from things beyond her control and her explosive scenes towards the close of the play undoubtedly elevate the whole piece. Esmé Patey-Ford is the nurse, Rachel, whom Cam has taken a liking to as a friendly face which only causes Kay further frustration; Rachel is the one with the power to keep him there. Patey-Ford embodies ‘Kind NHS Nurse with years of experience and an innate urge to do good’ perfectly – everything in her manner, her physicality and her voice cries out for confidences and people to nurture. The distant but returning pal Peter is the near-opposite; Jon Tozzi’s character is painfully awkward, as I’m sure we’d all be if a friend from school called and asked to see you…at the institution. He mumbles, bumbles and offers over-eager attempts at conversations, desperately casting out a bouy for Cam to cling to. Peter too, has a kind heart and is willing to make sacrifices to support this friend he hasn’t seen for years, but this dynamic between what were once a typical pair of rugby mad lads has matured into something resembling child and caregiver. The same can be said of Kay of course; she too takes the role of carer, with Imms pointing out that our natural instinct is to care for those unable to care for themselves, and with that message, we’re back on Paper Creatures ground: bold, relatable stories. Even if we have no personal experience with the extreme of sectioning presented here, we have all known someone struggling and we have all taken steps to support them in whichever way we can – that’s human, and that’s at the heart of this new play. 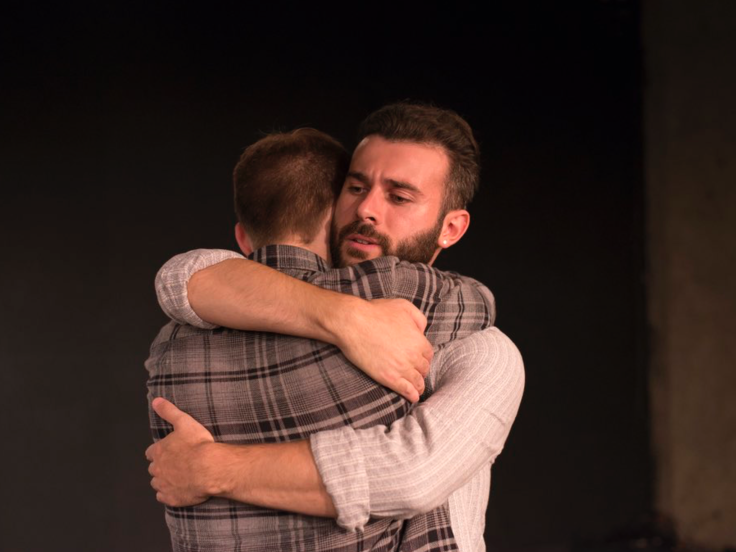 There are some great opportunities to pause for thought throughout as Imms subtly throws out ideas about mental health which don’t quite sit right through lines which feel uncomfortable as they hang in the air. Peter’s gift of grapes is one such example – the expectation of grapes for the poorly and the hospitalised highlights the jarring discord between understanding physical and mental illnesses; Cam can’t remember simple things or sustain conversation but he doesn’t have a broken leg in need of rest and good nutrition. Kay’s concerns about Cam being placed in this particular institution creates parallels with prison; there’s talk of the impact of someone with minor mental health issues being irrevocably influenced by those with much more pronounced problems. There’s something being said here about Sectioning shifting from protection to incarceration which toys with perceptions of mental health struggles by introducing the distinction between mental illness which leads to criminal actions and mental illness which appears more benign – yet Kay seems unaware of the way Cam’s story blurs the boundaries of her own ideas about controlling behaviours when suffering with poor mental health.

With Section 2, Paper Creatures Theatre continue with their vision of serving a millennial audience, reflecting modern life for the young and the bold. Here we have a twenty four year old man who woke up one day to find his mind betraying him, leading to his being sectioned for 28 days. Imms’ is a script filled with contemporary references to make the millennial majority of the audience feel right at home. The comic references are relatively few compared to the dramatic content but almast all of those quips are based around relateable modern experiences; social media, reconnecting with people known at school, relationships held vaguely together by sporadic texts made awkward by a genuine, in-the-flesh meeting. This is an important, sensitively written story delving into new territory when it comes to depicting mental health struggles on the stage. It’s a piece which deserves to be seen and the fact that the company has consulted with those who have dealt with poor mental health and MIND to create this production makes it something of a uniquely well rooted show.

Section 2 is part of The Bunker Theatre’s Breaking Out programme and it plays Tuesdays and Fridays until July 7th 2018. You can find tickets here.