A brand new book-to-movie hit lands on stage with West Yorkshire Playhouse’s production of Paula Hawkins’ hugely successful novel The Girl on the Train. Adapted for the stage by Rachel Wagstaff and Duncan Abel and directed by Joe Murphy, it’s a thriller which sees a confused alcoholic wading into a police investigation in attempts to fight for truth in the story of a missing woman while also desperately searching for her own truth. It touches on complex issues of addiction, perception, manipulation and abuse as our protagonist navigates an untrustworthy world, usually after downing a bottle, which of course tends to distort memories as much as it removes or destroys them… There’s plenty of drama and a good dose of thrilling tension, with a little wit in the mix to boot – but there’s also a keen sense of waiting around for something to begin as the production lays foundations in Act 1 while Act 2 bares teeth, and comes out fighting, delivering some excellent scenes of revelation and desperately-sought clarity. 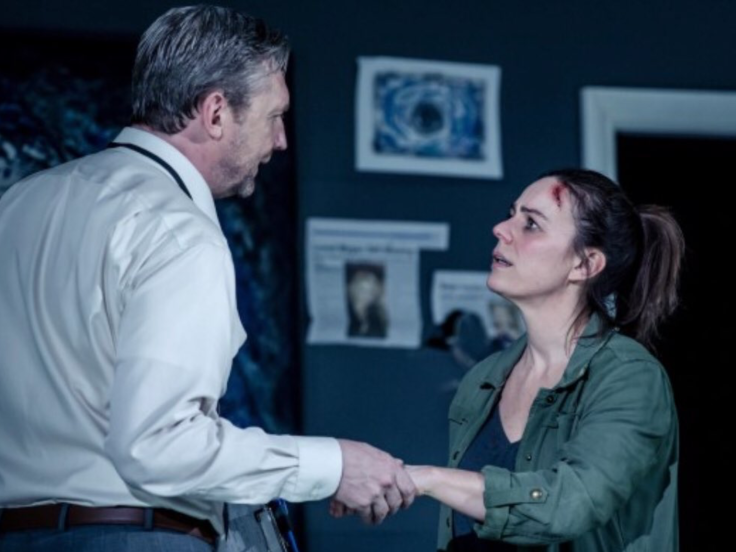 D.I.Gaskill (Colin Tierney) is investigating a missing persons case. Rachel Watson (Jill Halfpenny) thinks she has insights to offer as an eager observer into the lives of others from her train window. Unfortunately, Gaskill can’t seem to trust Rachel any more than she is able to trust herself; after a devastating separation from ex-husband Tom (Adam Best), she’s struggling to deal with her interactions with his new wife Anna (Sarah Ovens) and…life in general really. Megan Hipwell (Florence Hall) is our missing person and much to Gaskill’s bemused dismay, Rachel can’t seem to keep her distance, roping in Megan’s husband Scott (Theo Ogundipe) and therapist Kamal Adic (Jonas Khan) in attempts to solve the mystery.

Halfpenny gives a brilliantly intense performance as the deeply troubled Rachel, tackling the gritty just as well as she does the tragic and her version of Rachel seems somehow very accessible even with her very unique blend of troubles. Tierney plays the sceptical modern cop with a mildness which seems at once appropriate when dealing with someone like Rachel but also incongruous when we remember he’s an important man with a vital job to do. Halfpenny and Tierney deliver some great understated dramatic exchanges, as is the case with Khan as the therapist without boundaries. Adam Best does an excellent job of conjuring a complex ex while current wife Anna (Ovens) offers us the picture of the prim, perfect wife and mum who happens to be the opposite of the dishevelled, unstable Rachel. Hall’s telling of Megan’s past is beautifully drawn out and Ogundipe is equally well equipped in delivering the drama as he works with and against Rachel in search of answers. There’s no train to be seen here, as many might expect – instead, an upper level, projections (Adrzej Goulding) and lighting (Lizzie Powell) shift us between Rachel’s present and her flashbacks. We are encouraged to question the truth of what we see just as Rachel voices her own concerns, offering an interesting lens through which to judge Rachel’s claims and the ‘memories’ we are privy to on the merit of whether or not they fit into our own version of the how the puzzle seems to slot together. Lily Arnold’s set is well crafted for a story like this; opting for a neutral set housing only a few simple props and a dominating art work, we can flit between several locations without any fuss – a simple and effective reflection of Rachel’s hazy, ever-shifting memory. We also have the visuals of a train window, with a lit curved border carving out the familiar shape amid the Courtyard stage space; a shape which is in fact thrice repeated, creating a sense of an optical illusion playing out – perhaps reminding us that the lens of Rachel is always as risk of illusion?

Overall, it’s something like viewing the piece from our own window, and maybe even a nod at watching fiction as with a television screen, but there’s a sterile neutrality to it all which aptly descends us into this vague shapeless world Rachel is experiencing. The movement of the set is a real strength, creating that slightly alarming sensation of not knowing whether it is you or the object close to you that is moving, serving as a lovely visual and a thematic reflection of Rachel’s uncertainty. I will however note the other side of the coin in that the central art work of a black hole is more than a little heavy handed, but it serves its purpose well enough, particularly for what I imagine is considered the big reveal as we approach the closing scene – I’d have liked to see a little more nuance in places with this though. That’s my only real criticism of this piece actually; the cast give strong performances throughout and Halfpenny in particular is a great force, but in terms of staging a thriller that is by now widely known and not so much of a mystery, it needs a little more to engage and impress – particularly visually. The first act feels a little too close to radio play at times with all the static movement and lack of notable ascension – the projections are a step in the right direction, but more is needed with this breed of production I think. 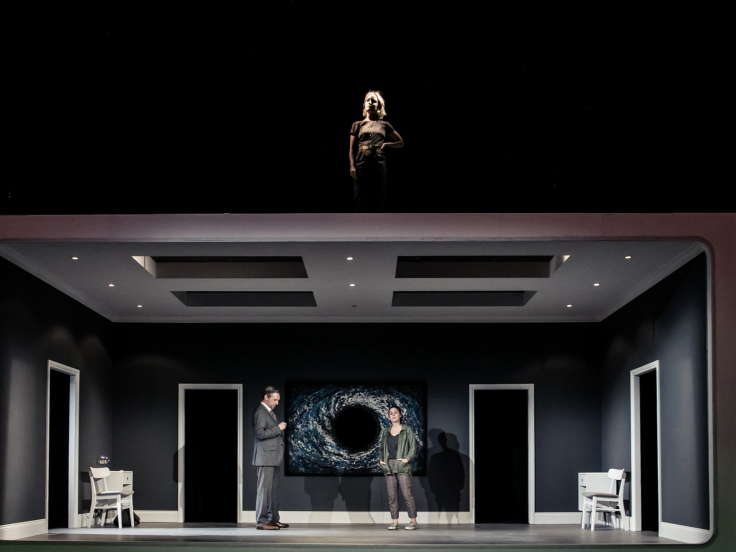 This production certainly does well to deliver the drama of the piece and the cast carry the story along with fervour. I was gripped by the ferocity of action and revelation in Act 2 – something almost completely absent from a somewhat meandering first half, so I think with this piece, the tonic comes in the shape of greater balance and a more ambitious approach to the staging. The design and direction choices definitely serve the story well, but more could be done to deliver a theatrical flair to give the piece something more delicious to savour, particularly for those attending as fans of the book and/ or Dreamworks film. What this production does get very much spot on is the casting – and the casting of Jill Halfpenny in particular as the lead; it’s an intense role which sees her on stage for the duration, and she’s beautifully compelling to watch. If you’ve never come across the book or film, I think this production will definitely grip and engage – if you know either book or film already, this production is worth seeing for a new take on the central role, even if the overall staging doesn’t get a pulse racing.

2 thoughts on “The Girl on the Train: A Best-Seller Hits the Stage”